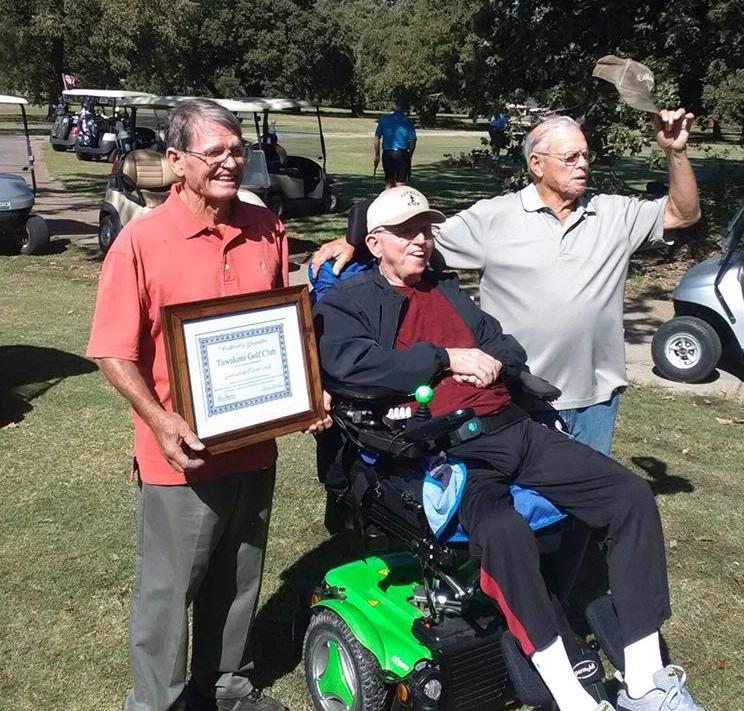 West Lake Tawakoni mayor Alan Shoemake presented the Livelys a special recognition for operating a golf club for close to 50 years that has well served the community and surrounding area. Accepting the award (from left) were the Lively Brothers — John, Glenn and Billy. Below is the entrance to the Tawakoni Golf Club. Pat Wheeler/Correspondent 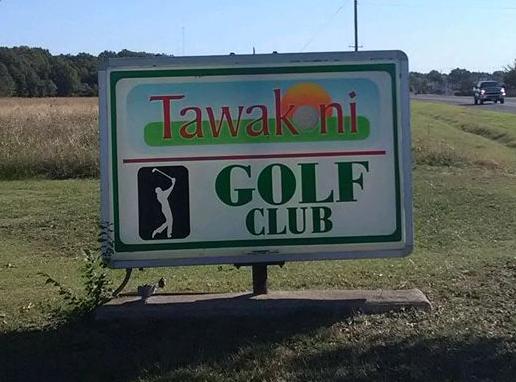 The entrance to the Tawakoni Golf Club. Pat Wheeler/Correspondent

The par 3 No. 4 hole at Tawakoni Golf Club. Pat Wheeler/Correspondent

West Lake Tawakoni mayor Alan Shoemake presented the Livelys a special recognition for operating a golf club for close to 50 years that has well served the community and surrounding area. Accepting the award (from left) were the Lively Brothers — John, Glenn and Billy. Below is the entrance to the Tawakoni Golf Club. Pat Wheeler/Correspondent

The entrance to the Tawakoni Golf Club. Pat Wheeler/Correspondent

The par 3 No. 4 hole at Tawakoni Golf Club. Pat Wheeler/Correspondent

WEST LAKE TAWAKONI — When preparing for my annual sojourn to Northern Ireland earlier this year, I discovered a nine-hole course named Bushfoot not far from Royal Portrush where the 148th British Open was played in July.

Excited about finding a new “hidden gem,” I called Bushfoot transatlantically to see about our group playing the course as a tune-up for the Causeway Coast Amateur. I expressed my joy at finding an out of the way course that listed former British Open champion Darren Clarke as one of its members.

“Well, we’ve only been here 132 years,” was the cheerful reply in full Irish brogue.

That humorous moment came to mind recently on a gorgeous afternoon when I attended a “Thanks for the Memories,” party honoring John and Billy Lively, owners of Tawakoni Golf Club since its inception in 1971. It was a true celebration of golf with more than 90 golfers and their families and friends gathering to tell stories and play some golf on another hidden gem — this one on the west bank of Lake Tawakoni in Northeast Texas just south of Greenville.

As a native East Texan, I’m embarrassed that it took me 48 years to discover this beautiful course and finally put a peg in the ground to play it.

The setting for this 18-hole championship course is charming with a variety of mature pines and oaks punctuating a relatively flat piece of land bordering the lake. Remarkably, the routing of the holes was laid out in a day when John and Billy’s father, John Lively Sr., walked the property with his two boys.

Natives of West Texas near Eastland, the Lively family relocated to East Texas in 1955 with Lively Sr. taking the head professional job at Athens Country Club. The father and his two sons were all good players who competed at the highest level of competition on the PGA Tour. Lively Sr. left Athens for Van Zandt Country Club in Canton when it opened in the mid-1960s and then decided to build a course here toward the end of that decade.

Putting their knowledge of the game and good courses to work, the three men designed a layout that features doglegs to the left and right with a few straight holes blended in for good measure. Those doglegs are framed by large trees and thus require the player to work the ball with draws and fades to get good position for approach shots into small greens that are mindful of courses designed by the great Perry Maxwell and his son Press.

As the pro at Wright Park Golf Course in Greenville for the past 41 years, Bo Hartline has known the Lively brothers longer than most and confirmed my initial impression of the course.

“From the back tees, it is long enough to challenge even the best players, especially with those trees framing most of the holes,” Hartline said. “And the placement of the ponds and creeks makes it necessary to use good strategy. It has always been a really good test of golf but at the same time very enjoyable for the average golfer.”

Lake Tawakoni, known as the Catfish Capital of Texas, comes into view on holes three and four. The lake’s sparkling blue water made me want to rent a boat and just go for a ride the rest of the glorious fall afternoon. But back to business, I had a short iron into the par-4 third hole and then a middle iron to the picturesque par-3 fourth, both enhanced by views of the lake.

I was fortunate to play with Dean Overturf of Dallas who played on the PGA Tour Champions after a stellar amateur career that included a Texas Mid-Am championship in 1995. The former University of Texas golfer can still pound it and has a putting stroke unaltered by the passage of time. Overturf was patient to show me the driving lines on each hole and was pleasantly surprised when I actually hit a few where he prescribed.

Overturf’s good friend Jerry Ranson of Greenville invited me to attend the outing and was one of several people who helped get the word out and attract such a good crowd to say thank you to the Lively brothers for their part in supporting and growing the game of golf.

“There has been a great Wednesday ‘choose-up’ game at Tawakoni for years and a lot of us have enjoyed playing there,” Ranson said. “So a while back, when someone said we ought to say thank you to the Livelys for giving us a great course to play all of these years, I said ‘I will be there and bring some friends.’”

Speaking to the gathering that included both celebrities like retired rodeo champion Donny Gay and local heroes like “Little Bill” Owen, spokesman Jerry Baier said, “We want to thank John and Billy Lively for all of the 12-hour days they spent keeping this course in good shape for us to play for all of these years. So this is a ‘Thanks for the Memories’ tournament and thanks to everyone for coming out.”

Someone blurted out that they hoped Bob Hope, whose patented song was “Thanks for the Memories,” didn’t sue them for using that as a theme for the gathering.

Baier was a splendid emcee and brought up West Lake Tawakoni mayor Alan Shoemake to present the Livelys a special recognition for operating a golf club for close to 50 years that has well served the community and surrounding area.

After retiring to the Lake Tawakoni area, Baier lives just three miles from the course but in Rains County. He took up the game in retirement and learned to play at Tawakoni Golf Club.

Gay, a native of Mesquite who is the son of the founder of the long-running Mesquite rodeo, now lives in Terrell and plays a lot of celebrity golf while Owen moved to the area 15 years ago. “Little Bill” won two Fort Worth senior championships in the late 1980s and loaned me his sleek gasoline-powered golf cart that is decked out with a ball and club washer so I could tour the links in style.

As for the Lively brothers, John and Billy and their younger brother Glenn, the event took them by surprise.

“I am just shocked,” John said. “Words cannot express what I am feeling today.”

It was Terry Thomas of Greenville who best described what the Livelys have meant to golf through the years at Tawakoni Golf Club.

“Years ago, when I was new to the area, we were playing a long par 4 one day when this guy comes by in a maintenance cart and watches us hit our second shots with long irons,” Thomas said. “He had on jeans, a work shirt and boots with mud on them but ambled over and grabbed a 4-iron out of someone’s bag and dropped a ball. He hit this beautiful, high draw that landed and stopped about five feet from the hole. He got back in the cart and rode off. I was stunned.”

That man, Thomas said, was John Lively Jr. He was just taking a short break from his greens keeping duties that day.