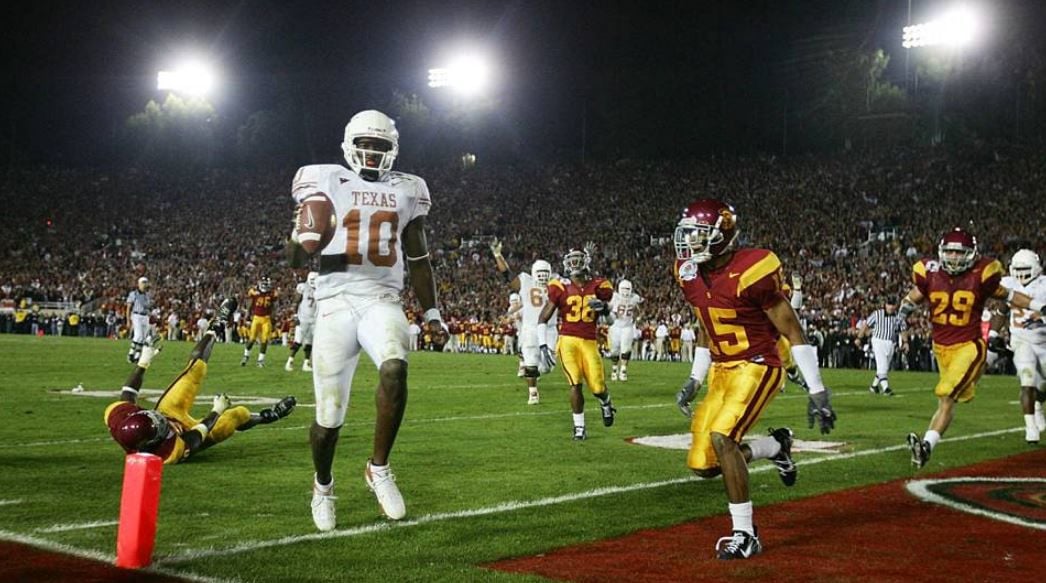 Texas quarterback Vince Young scores on fourth-and-5 with the national championship on the line during the 2006 Rose Bowl against USC in Pasadena, Calif. 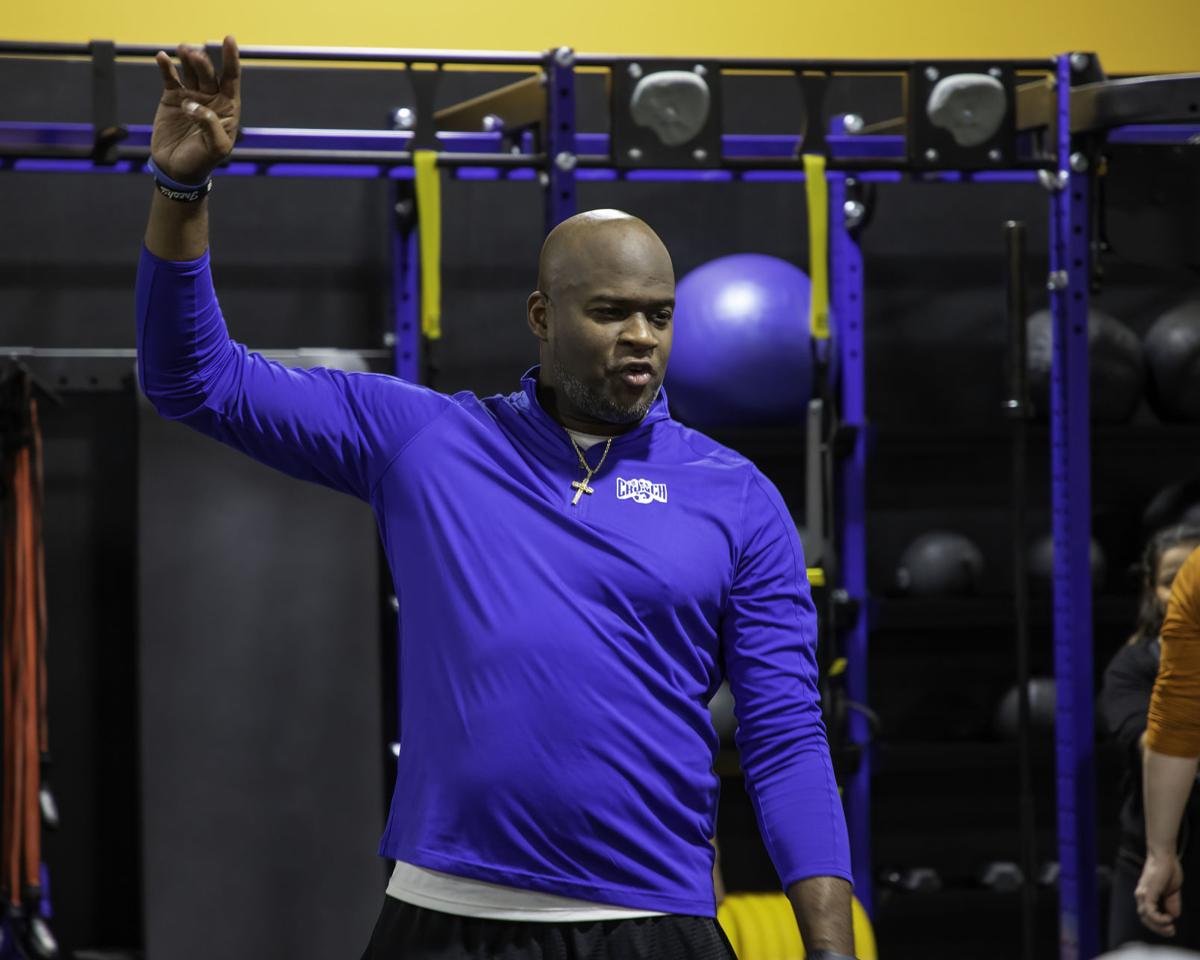 Vince Young works out at Crunch Fitness in Tyler on Friday. 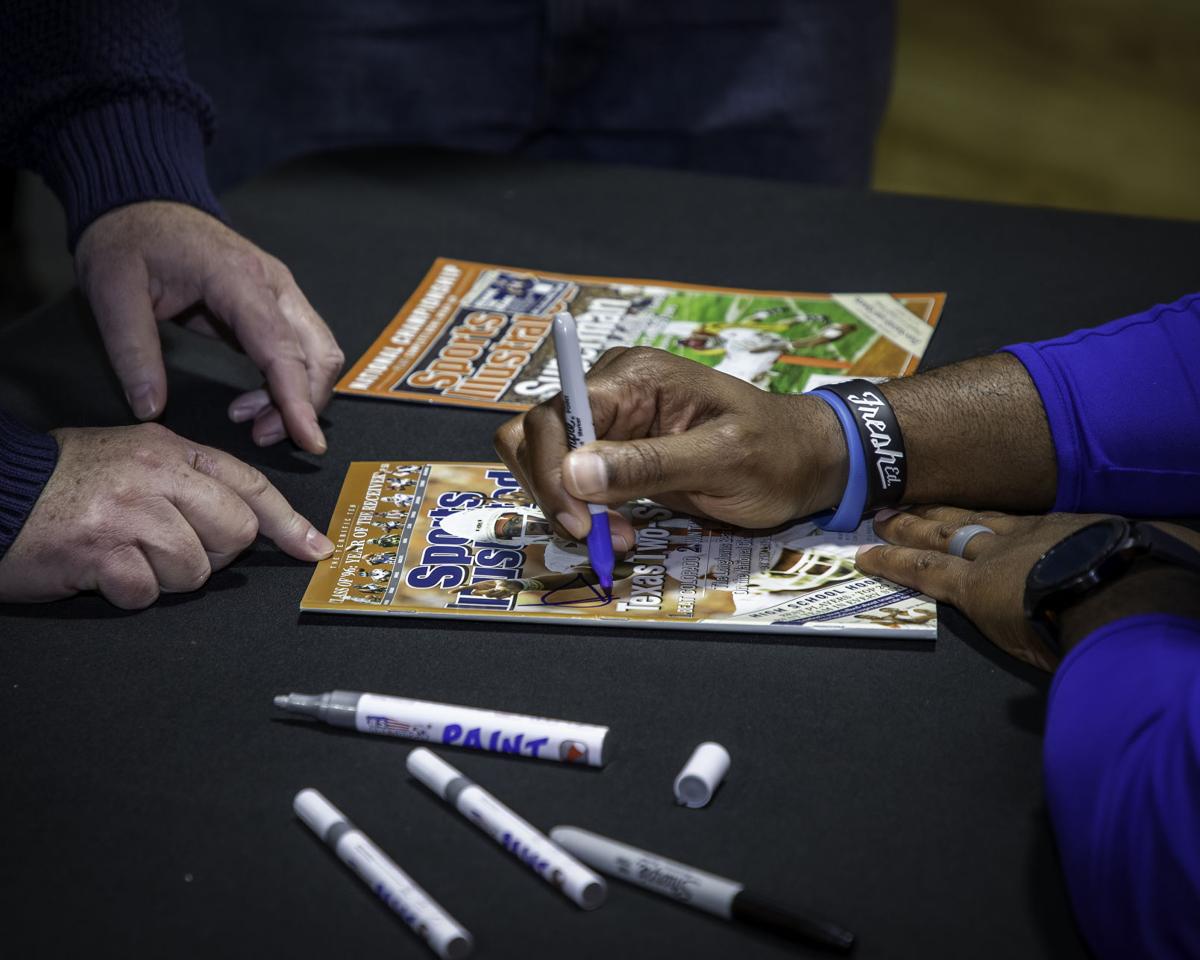 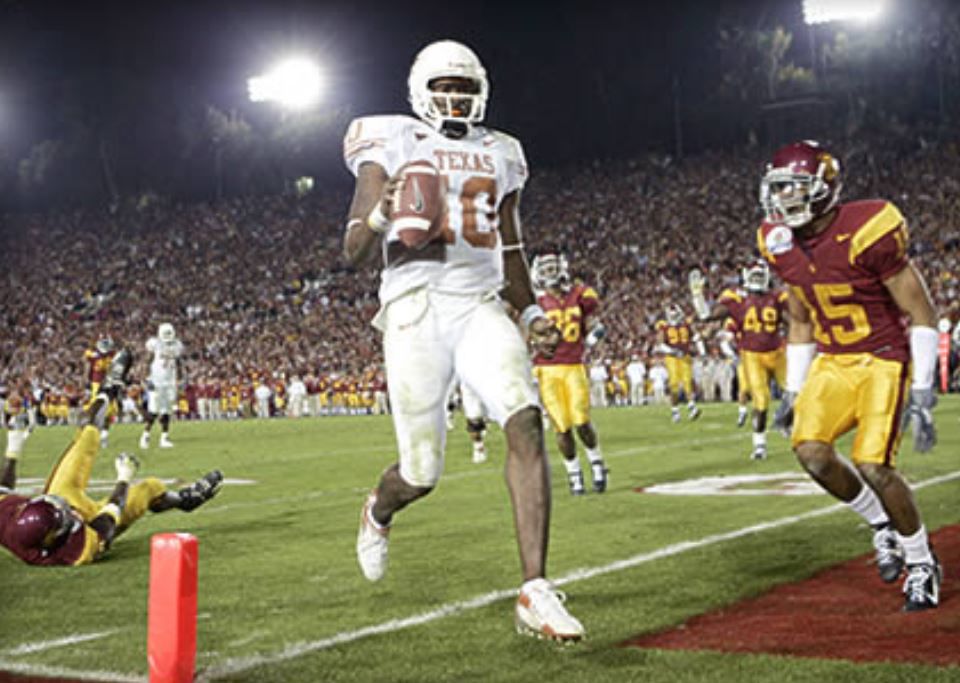 Texas quarterback Vince Young scores on fourth-and-5 with the national championship on the line during the 2006 Rose Bowl against USC in Pasadena, California. 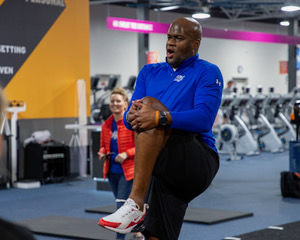 Vince Young working out at Crunch Fitness in Tyler on Friday. 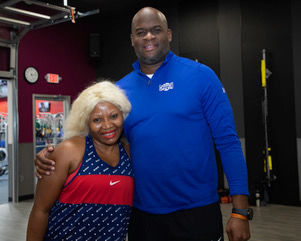 Vince Young with a fan at Crunch Fitness in Tyler on Friday. 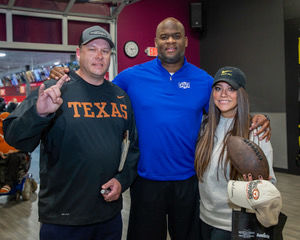 Vince Young takes photos with fans at Crunch Fitness in Tyler on Friday. 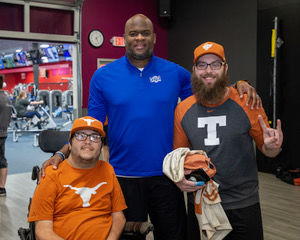 Vince Young takes photos with fans on Friday at Crunch Fitness in Tyler. 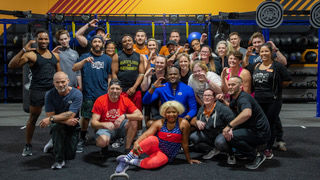 Vince Young with group of Fans at Crunch Fitness in Tyler on Friday.

Texas quarterback Vince Young scores on fourth-and-5 with the national championship on the line during the 2006 Rose Bowl against USC in Pasadena, Calif.

Vince Young works out at Crunch Fitness in Tyler on Friday.

Texas quarterback Vince Young scores on fourth-and-5 with the national championship on the line during the 2006 Rose Bowl against USC in Pasadena, California.

Vince Young working out at Crunch Fitness in Tyler on Friday.

Vince Young with a fan at Crunch Fitness in Tyler on Friday.

Vince Young takes photos with fans at Crunch Fitness in Tyler on Friday.

Vince Young takes photos with fans on Friday at Crunch Fitness in Tyler.

Vince Young with group of Fans at Crunch Fitness in Tyler on Friday.

Author Thomas Wolfe was born in the south, and when he heard the phrase, “You Can’t Go Home Again,” a book was born in 1938.

Wolfe’s book, which was published in 1940, two years after his death, comes full-circle.

It appears the same is happening with Vince Young. Except instead of death or tragedy, this story is about a man working his way back into the best shape of his life, accepting his past failures and embracing the time in his life that brings smiles to fans across Texas.

Vince Young wasn’t born one of the greatest college football players of all time, instead, he had every excuse not to come out of an area in Houston where he could join a gang as easy as he could a youth football team. Where he had to trust what his mother and grandmother said to be successful.

The community embraced him as he brought his high school football team to new levels. From there, it was off to the University of Texas to play for coach Mack Brown.

Texas was the team for a generation of fans, winning NCAA football championships in 1963, 1969 and 1970. By 1998, Longhorn fans, alumni and season ticket-holders were getting antsy, and a 4-7 record did not sit well.

Brown took over in 1998, and suddenly, happy days were here again. Double-digit win seasons were becoming the norm along with Cotton Bowl wins. In 2004, he named Young his full-time starter. Young rewarded Brown with an 11-1 season and an impressive win over Michigan in the Rose Bowl.

In 2005, Texas was still a good place for Young. He had to deal with his father in prison for part of his career, but he had Brown who showed incredible trust in his quarterback.

Once again, the odds were against Young. After leading Texas to a perfect 12-0 season, they had to face an incredible USC team. Not only was Pete Carroll the coach, there were two Heisman Trophy winners on offense, QB Matt Leinart and running back Reggie Bush. USC was No. 1 in the country and had won 34 straight games.

Brown knew the national championship would come down to the wire. And if it did, and if Texas had the ball? What would they do.

Before the team left Texas for Pasadena to play USC in their backyard for the NCAA title, Brown called Young into his office.

“Coach asked, ‘if the game is on the line, what play would you want to call?’ I said ‘quarterback sneak.’ Coach Brown said ‘let’s go with a pass play and give you the run-option pass,’” Young recalled.

The game appeared over with 4:03 left and USC ahead by 12 points. But Young ran for an exciting touchdown and things were about to get better. With Texas trailing 38-33 and 26 seconds left, it was time to run the play they had discussed.

Young gave a quick look to the end zone, was almost sacked, and he took off to the right, and right for a touchdown. He didn’t look like he broke a sweat all night and after he scored, he jumped the row of photographers and was all alone in a sea of fans and college officials. He didn’t show emotion, just went back to make sure Texas would win. He ran his QB sneak for a two-point conversion, a 41-38 lead and victory.

Young, who spent the a day in Longview on Thursday and in Tyler on Friday, remembers it well.

“On that final drive, Pete Carroll ran that blitz a couple of times. When they ran that blitz again, I was ready for it and my teammates did a great job blocking,” said Young. “I saw the lane and took off. It was a blessing, man. It wasn’t easy though! But it was fun to cross that line. I was definitely nervous.”

Keith Jackson on ABC said “We’ve seen some of the greatest players in the history of the game. But I’ve never seen what we watched tonight, before.”

His partner Dan Fouts said “you will never see another clutch performance like the one we saw tonight.”

When the Houston Texans did not select him No. 1 in the NFL draft, it was time to leave home. The Tennessee Titans took Young with the No. 3 pick. He left Texas for Tennessee, then stops in Philadelphia, Green Bay, Buffalo, Cleveland and even Canada.

He won 10 games in a row in the NFL, was named one of the best in the NFL, but coaches did not see Young like Brown did. Instead of having family and friends around, he had financial advisors who cost him millions. More recently, two driving while intoxicated arrests. However, he said he has faced those issues and working out and spreading positive messages are his goal.

Thomas Wolfe said two things in “You Can’t Go Home Again.” One was, “Make your mistakes, take your chances, look silly, but keep on going. Don’t freeze up.” He also wrote, “He had learned some of the things that every man must find out for himself, and he had found out about them as one has to find out — through error and through trial.”

Vince Young is home again and realizes his past is the rear-view window and the future is the windshield. He is also embracing that incredible moment Fouts and Jackson talked about instead of going after the next great thing.

I asked him when did it sink in that he was one of the greatest players in football history?

“It’s starting to be now,” said Young. “As I am retired and the College Football Hall of Fame induction has passed and the Rose Bowl Hall of Fame passed, these are memories I am getting a chance to cherish that I did not cherish until I retired.”

Retired also means working out. He led a group of kids and adults through a tough workout session at Crunch Fitness, then posed for photos and signed autographs for over two hours. Fans were in awe. One fan was so nervous, when he posed for a picture, Young had to remind him you need to have a camera first. The fan reached in his pocket for his phone, starstruck and appreciative.

“It’s starting to hit me a little bit more,” Young admits. “I’m getting around and meeting so many people in different communities and getting all these accolades.”

But what about the negative things he has had to encounter?

“It shows the younger generation anything that you go through in life, you can prepare and get over it ... you can get through it,” said Young.

And once you get through it?

“You can also reach and achieve a lot of really good things if you work hard for it,” said Young. “I want my message to kids across the world and to younger quarterbacks, when the game is on the line, think of all the hard trials and tribulations you went through in life and cherish that moment because you never know if it will happen again.”

Covering different NFL teams, I’ve had a chance to see Vince Young the NFL quarterback, and I never witnessed the college legend. He reminds me a little of Ryan Fitzpatrick, he could win right away wherever he went. Unlike Fitzpatrick, Young was slowed and stopped by injuries in a few stops that gave him a chance at leading a team to the Super Bowl.

I tried to bring this up to Young, and his playful mood quickly turned serious. He stopped my statement on his NFL career short.

“Yea, things happened, But my career? That’s not my career,” said Young. “A lot of people think football was the end of me. But I have more to do. And I’m doing more now off the field. I am making sure the younger generations listen to my testimonials, I’m doing really successful things in business. Football was the first chapter.”

And Young sounds once again like a leader and you can see why the kids looked up to him all week in East Texas.

“My life ... my life is still going,” he said. “Now I am in the second chapter of my life and I want to continue to get better as a grown man.”

Young no longer has the huge national endorsements, rather his own real estate company and he’s partnering with an engineering business. He continues to work with Tiff’s Treats bakery and now, customers were signing up left and right because of his appearances at Crunch Fitness.

I asked him if he is going to expand his business portfolio. He smiles as he has learned his lesson.

“Just Texas. Texas is big enough! I don’t have to go nowhere!” he laughs.

Young is now into his fifth hour at Crunch Fitness, when a few people who bought the last University of Texas items to get autographs rushed through the door. Young still had the Sharpie in his hand to sign.

“I like giving back to the community. I like taking time to talk to people, I like taking pictures, signing autographs,” he said with a smile. “I want to make sure people know, I really do appreciate them supporting my career all through my years.”

John Anderson is the editor of the Tyler Morning Telegraph and a columnist. He can be reached at janderson@tyler paper.com.