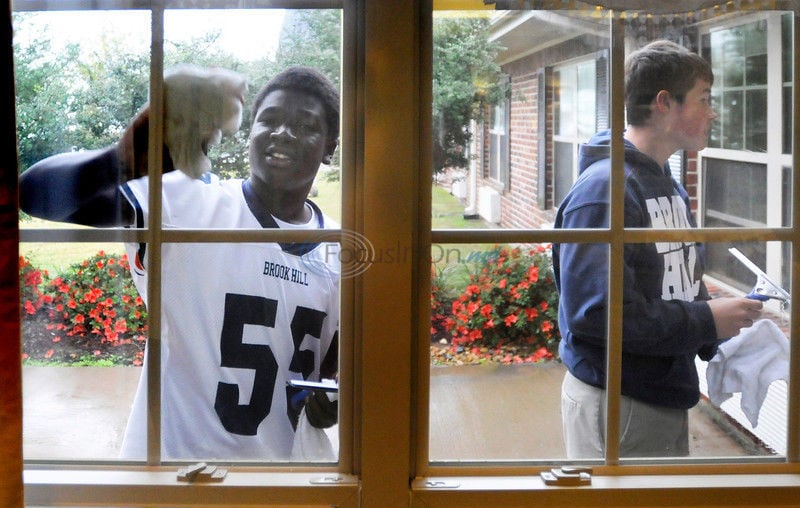 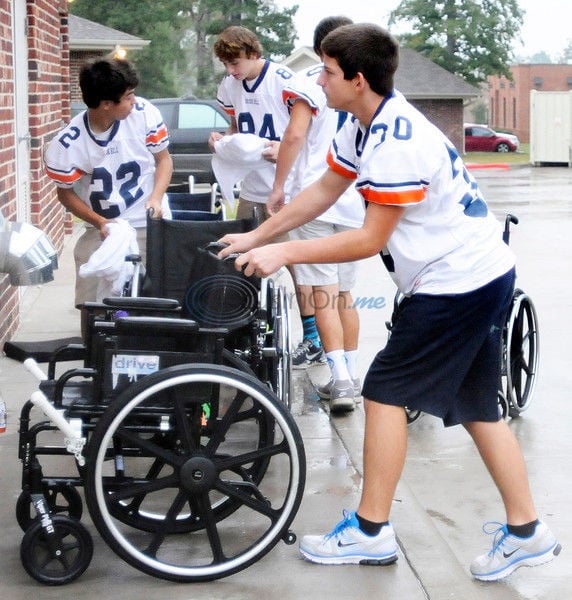 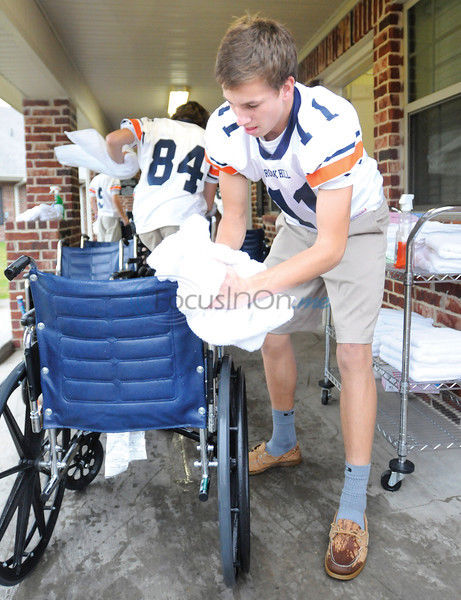 As soon as The Brook Hill School football players hit the doors at the Heights of Tyler on Tuesday, they channeled their energy into pressure washing windows, wheelchairs and moving furniture around for the residents of the skilled nursing facility in south Tyler.

Their enthusiasm for helping the residents was palpable as different groups received their assignments.

"I like helping the community — they come out and support us at football games," Zach Wilson, who is 17 and a senior, said as he washed windows on the front of the brick building. Wilson and his teammates talked about the need to give back to the community.

Grant Jones, 16, a junior, said helping others in the area is an important part of what Brook Hill does each year.

"It's not about us — it's about the community around us," he said.

Each year, student athletes in all of the school sports programs complete one service project, head coach Bobby Brasher said. Last year, the athletes went to Lancaster in Dallas County to help clean up after a tornado that had destroyed part of that town in April 2012.

"It's a part of the growth process of these athletes — sometimes they get in the mindset of take, take, take, and it's good for them to get out and give back," Brasher said.

Sometimes athletes are put on a pedestal, he said, and community service is a good way to form a well-rounded student athlete.

"At Brook Hill, it's important because we are on direct orders from Jesus to help those less fortunate," Brasher said.

For another recent service project, the school partnered with Vanderbilt Baptist Church in Tyler to collect canned goods for a food drive, which went to the Texas Baptist Food Bank.

"We wanted something more hands-on for them than having mom leaving canned goods at the house," Brasher said of the project at Heights.

Heights of Tyler Administrator Janna Kuechle helped open the facility in 2010. She has worked in her field for 24 years. She thinks there is value in having the young people come in and help out.

"It's important for several reasons," she said.

"First, the work needs to be done," she said referring to the pressure washing and other duties the students were performing. "Second, the residents look forward to the interaction."

Also, the experience exposes the students to situations they might not be comfortable with, but it can help them grow, Ms. Kuechle said.

She added that she hoped the work would introduce students to careers in the medical field. "If it's a good experience, they may come back," Ms. Kuechle said