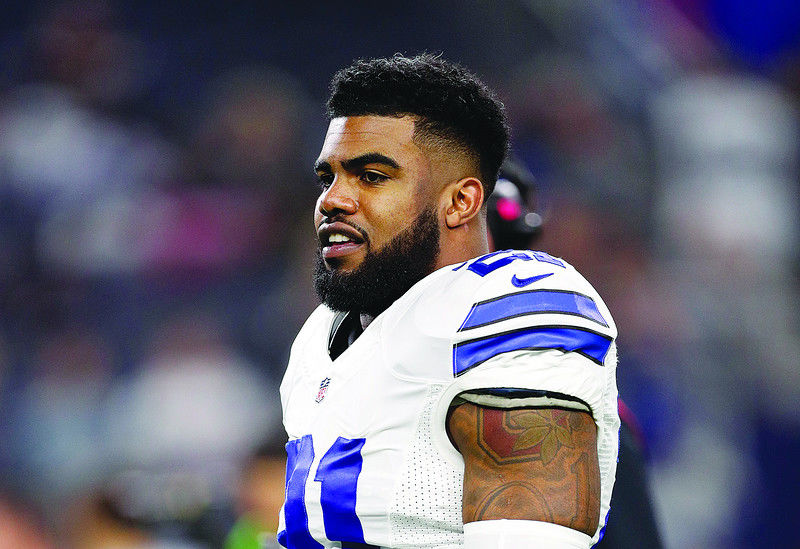 THE DALLAS COWBOYS stumbled into not only two Rookie of the Year candidates but also two MVP candidates including running back Ezekiel Elliott. (AP Photo/Brandon Wade) 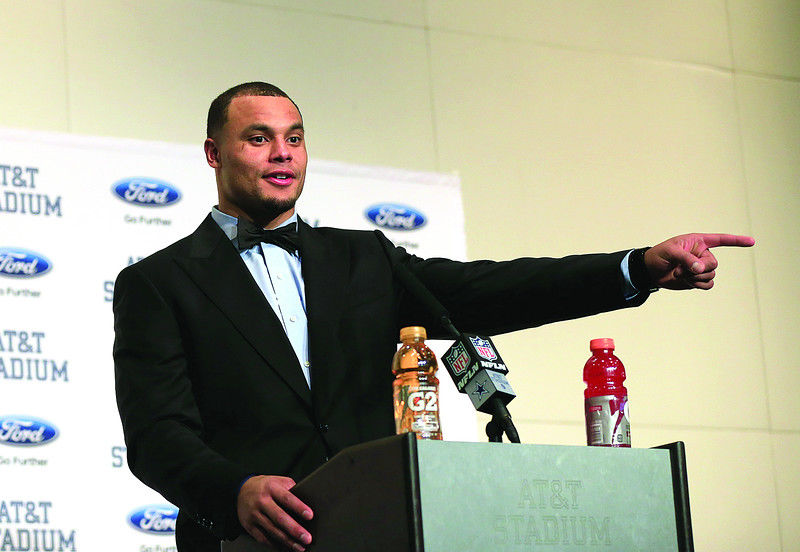 THE DALLAS COWBOYS stumbled into not only two Rookie of the Year candidates but also two MVP candidates including quarterback Dak Prescott. (AP Photo/Ron Jenkins)

THE DALLAS COWBOYS stumbled into not only two Rookie of the Year candidates but also two MVP candidates including running back Ezekiel Elliott. (AP Photo/Brandon Wade)

THE DALLAS COWBOYS stumbled into not only two Rookie of the Year candidates but also two MVP candidates including quarterback Dak Prescott. (AP Photo/Ron Jenkins)

In the playoffs, the Houston Texans mail it in against the Chiefs in a shutout loss that reinforces the notion they need a quarterback so desperately, they’re willing to throw a pile of money at anyone who can field a shotgun snap.

Also, the Bengals lose to the Steelers because Vontaze Burfict literally cannot stop hitting Antonio Brown in the brain.

Eventually, Denver moves on to the Super Bowl in a thrilling win over New England that goes down to the final minute. Three hours later, Carolina advances with a win over Arizona so lopsided, Cam Newton plays the entire fourth quarter without a helmet, wearing a “Panthers NFC Champions” hat.

The Hall of Fame announces this year’s class of inductees. Terrell Owens does not have to get his popcorn ready.

The Broncos defeat the Panthers in Super Bowl 50, thanks to an adequate game from 73-year-old Peyton Manning, and an awful game from MVP Cam Newton. Luckily, Newton makes up for it with a silly post-game press conference and funny pants.

In free agency, Robert Griffin III signs with the Cleveland Browns, in the ultimate “Mashup of Sadness.” In an act of great foreshadowing, Brock Osweiler attempts to tell the Texans he’s taking their contract offer, but is unable to complete a phone call.

Peyton Manning announces his retirement to spend more time with his family, which includes his wife, kids, and Papa John.

Lions wide receiver Calvin Johnson also announces a somewhat surprising retirement, following in the footsteps of other Lions greats like Barry Sanders by getting out of Detroit as soon as possible.

The Los Angeles Rams trade up with the Titans to get Jared Goff, thus giving them a franchise quarterback. However, that “franchise” turns out to be a string of Southern California Arby’s.

On day two of the draft, chaos rules as the Cowboys take a guy who won’t play this year, Tampa Bay trades up to grab a kicker, and Oakland drafts a goalie. Somewhere along the way, Dallas stumbles into drafting two different MVP candidates, thereby using up all of their luck for the next hundred years.

The Cowboys announce they will not resign troubled pass rusher and terrifying human Greg Hardy. Hardy responds by destroying and devouring a Hyundai Elantra.

Also, the Cowboys find out Randy Gregory has been suspended for four games for violating the NFL’s substance abuse policy, after originally failing his scheduled drug test at the NFL Draft Combine, which is like showing up for church drunk.

The 2nd U.S. Circuit Court of Appeals reinstates Tom Brady’s four-game suspension after a brilliant legal case by the NFL, which consists basically of pointing at him at saying “He did it.”

Tony Romo puts any question as to his durability to rest, as his season ends after three preseason plays.

Jeff Fisher signs a contract extension with the Rams. The team decides to wait for a good time to announce it, which will wind up being “The Eleventeenth of Never.”

The regular season opens with Denver beating Carolina 21-10. Sadly, this game might be the highlight of the season for both teams.

Football returns to Los Angeles after more than twenty years away. The Rams celebrate their new home losing by four touchdowns to a team that can only beat the Rams. L.A. fans celebrate by looking at their phones.

Texans fans are crushed as J.J. Watt is lost for the season, and even worse, Brock Osweiler is not.

After another awful overseas game, the NFL attempts to leave the Jaguars in London.

Raiders owner Mark Davis starts crossing out “Oakland” and writing in “Las Vegas” on all his stationery.

On election night, the Chargers attempt to get San Diego to authorize funds for a new football stadium, which goes over like Jalapeño flavored Pepsi.

Packers coach Mike McCarthy, mired in a slump, announces he’s been a “highly successful head coach” without mentioning his entire career has been spent with either Brett Favre or Aaron Rodgers as his quarterback, which is like the guy who played Chewbacca talking about being one of the biggest movie stars of all time.

Bengals fans begin to realize they won’t be suffering through yet another first round playoff loss.

Eric Dickerson gets into an argument with Jeff Fisher because Dickerson wants sideline passes for Rams games. No one is able to explain why.

Andrew Luck goes out with a concussion, and the NFL responds by flexing the Indianapolis Colts games to 4:45am on Monday mornings.

After not bringing a tie for a road trip, Cam Newton is benched for the first interception of the Seahawks game.

Jeff Fisher is fired by the Rams on the Monday before a Thursday game, making it the best L.A. firing since Lane Kiffin got dragged off a bus on the LAX tarmac and canned as USC coach.

Dak Prescott finally has a game where he appears to be human, leading to week-long calls to sports talk shows calling for Tony Romo to get the start again. And surprisingly, only about 40 percent of these calls come from Jerry Jones.

The Minnesota Vikings go from 5-0 to getting housed by the Colts and out of the playoff hunt, thus providing the NFL with whatever the opposite of a Cinderella story is.

After blowing a lead against the Texans, Jacksonville fires head coach Gus Bradley, who had the worst winning percentage of any coach in NFL history who was not also an owner of the team. And that sounds like something I’d make up, but it’s true.

And 2016 ends for the NFL with the Buffalo Bills jettisoning millions of dollars and hundreds of pounds worth of Ryan brothers.

Reid Kerr talks a lot, as his wife always reminds him. Reid’s second book, “I Hate It Here: A Love Story,” is out now on Amazon.com. You can always tweet questions, comments, and angry messages to him at @reidaboutit.