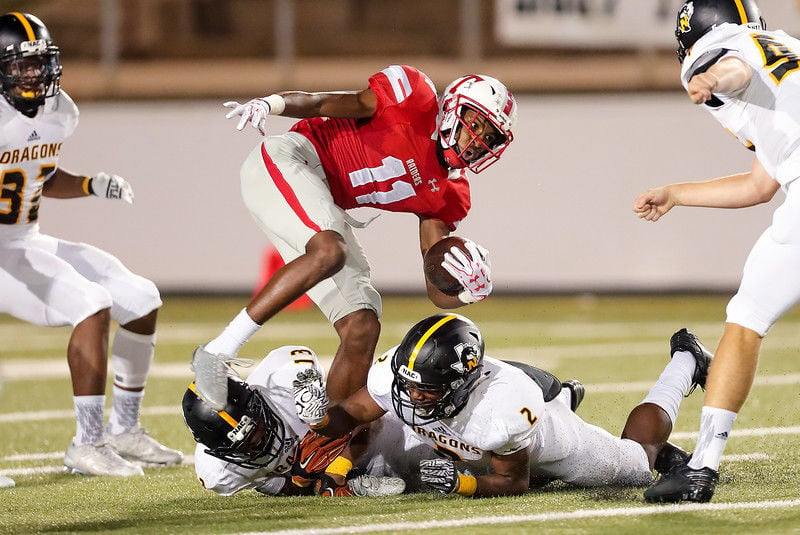 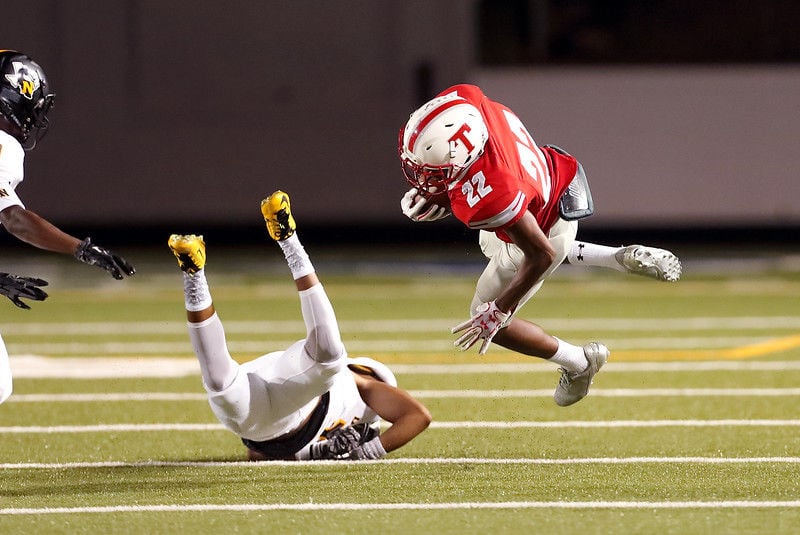 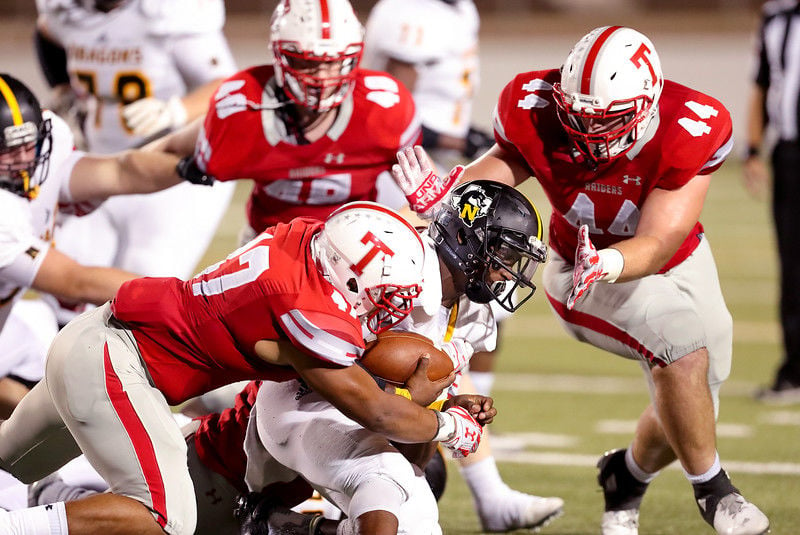 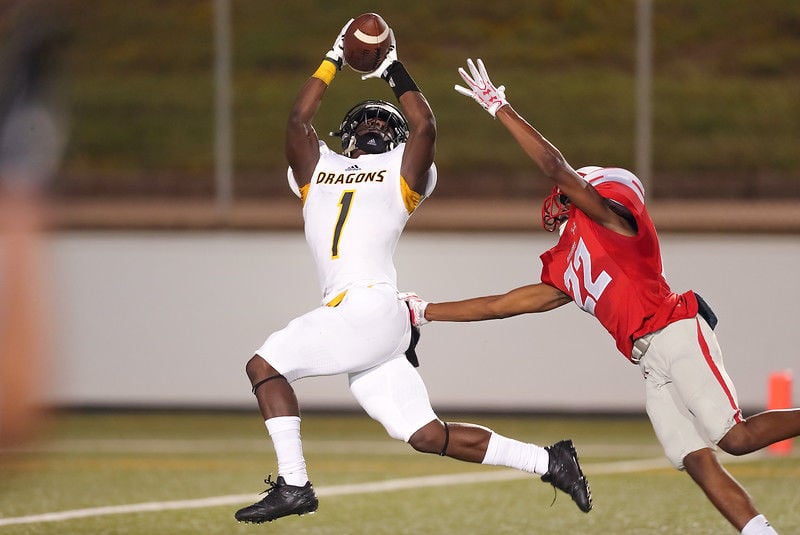 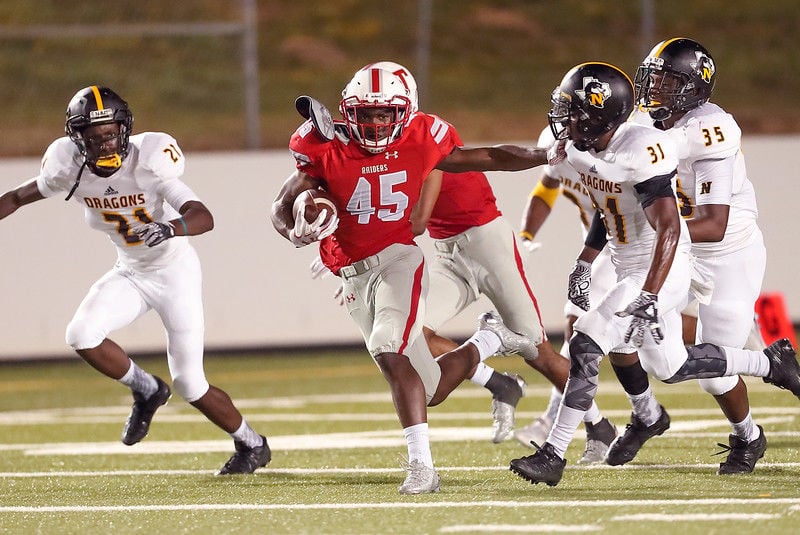 Nacogdoches seniors Phillip Jones, Josh Thompson and Brad Phillips made sure there would be no celebrating for Robert E. Lee on its homecoming Friday.

Jones rushed for 231 yards and a touchdown, Thompson returned a punt 75 yards for a touchdown and Phillips blocked a punt that led to a field goal.

It all added up to a 24-17 win for the Dragons (2-1) at Christus Trinity Mother Frances Rose Stadium, dealing Lee (2-1) and head coach Clayton George their first loss of the season.

Lee junior quarterback Chance Amie did his best to lead the Red Raiders back from a 24-0 deficit, rushing 26 times for 234 yards and two touchdowns. That accounted for 66 percent of REL's offense in the game.

REL trailed 24-14 at halftime and the defense pitched a shutout in the second half to give the Red Raiders a chance to rally back.

Twice in the third quarter, REL drove deep into Nacogdoches territory, but was denied both times on fourth down.

Lee did cut into the deficit early in the fourth quarter on a 26-yard field goal by Leonel Coreas, but couldn't draw any closer.

Needing one final drive to run out the clock, Jones delivered for the Dragons with a 21-yard run on third-and-10 to help Nacogdoches ice its victory.

REL did have a last gasp opportunity, out of timeouts at its own 25 with 45 seconds remaining, but Amie was sacked twice to end the game.

"I thought we played really well in the first 20 minutes and then we kind of settled in and let them have two long drives and we made a couple mistakes," Nacogdoches coach Bobby Reyes said. "In the second half they made a good adjustment and I got too conservative with play calling, but our defense played lights out."

The game began with Nacogdoches taking the ball and quickly facing third-and-long with Noah Hildebrand's deep pass incomplete. A flag gave Nacogdoches a first down and the Dragons steamrolled for the next quarter and a half.

On first-and-10, Jones cut back and burst up the middle for a 33-yard gain. His next carry on the next play went 24 yards into the end zone for a 7-0 lead.

Lee's first of two three-and-out possessions in the first quarter gave Nacogdoches the ball back. Despite the Dragons continually hindering themselves with false starts, Hildebrand connected with Jaylon Maxie for a 36-yard touchdown on first-and-20.

REL's second three-and-out led to disaster for the Red Raiders with its ensuing punt blocked by Phillips to give the Dragons possession at Lee's 13. The Red Raiders defense stiffened and forced a Chris Campos-Gonzalez 26-yard field to push the score to 17-0.

Lee's Donerick McCray gave REL life with a 41-yard run before the drive stalled near midfield.

On previous punts, REL had made a concerted effort to not kick the ball to Thompson, a Texas commit.

This time he appeared about to fair catch it, but instead kept his hand down, caught the ball and took off, leaving Red Raiders in his wake as he weaved in and out for a 75-yard touchdown.

It was the only time Thompson had a chance to return any of Lee's kicks in the game.

"He's pretty special to be offered by the number of schools he has; he's pretty electric," Reyes said. "Now he has a punt return for a touchdown and he already had a kick return. I imagine people are going to try and kick the ball away from him. I know I would."

Now down 24-0, Amie had enough, taking it himself up the middle for a 70-yard touchdown that was brought back by a penalty. All that did was make Amie more determined, going 29 yards on his next carry before finishing it with a 1-yard touchdown.

After REL forced Nacogdoches into a turnover on downs, the Red Raiders drove 70 yards in seven plays, capped by Amie's second TD run to make it 24-14.

"We always want to stay true; that is one of our game day expectations," George said. "Chance kept us in it and we just made too many mistakes to pull out the victory tonight."