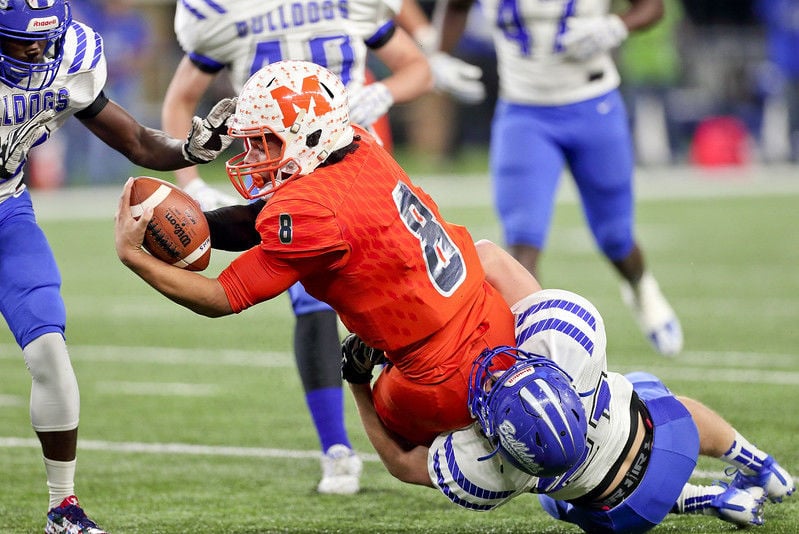 Mineola's Jeremaih Crawford (8) reaches the ball out for the first down during their state championship 3A D1 game against Yoakum, at AT&T Stadium. (Lang White / Correspondent) 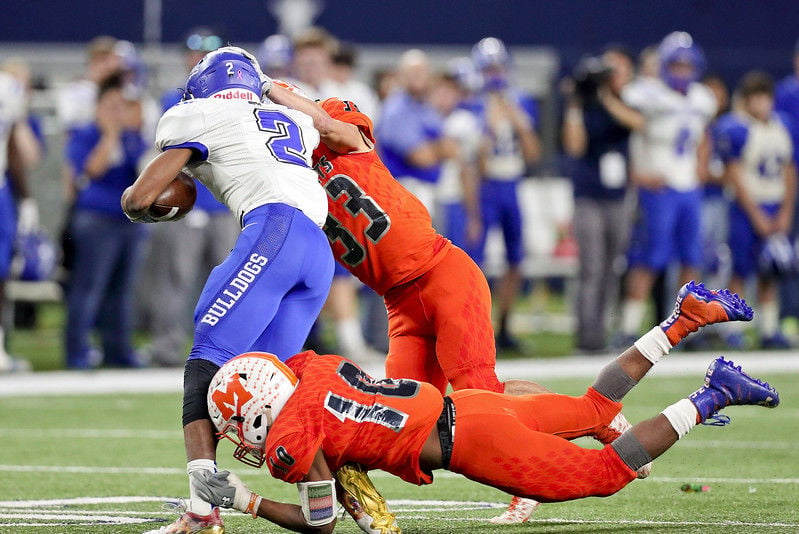 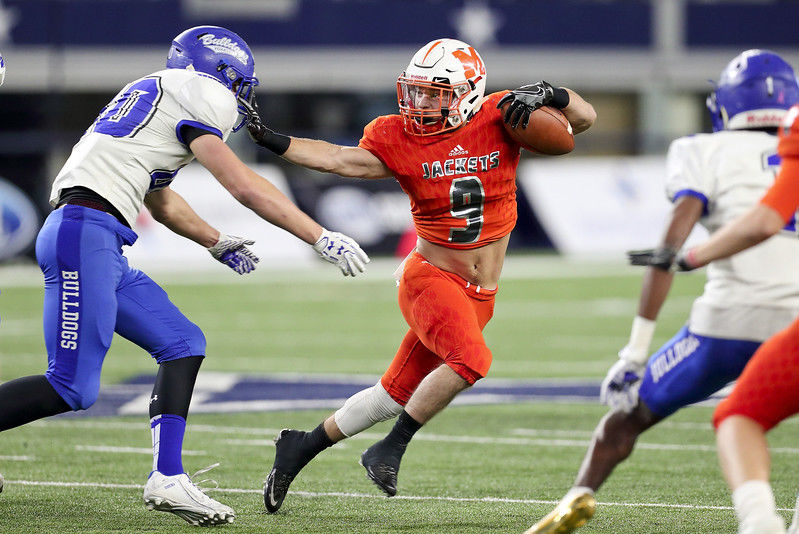 Mineola's Jeremaih Crawford (8) reaches the ball out for the first down during their state championship 3A D1 game against Yoakum, at AT&T Stadium. (Lang White / Correspondent)

ARLINGTON — The celebration started with 24 seconds to go. Mineola coach Joe Drennon was already dripping from his Gatorade shower. Years of hard work and dedication had finally paid off.

The Mineola Yellowjackets were the Class 3A Division I state football champions.

Led by a performance from Jeremiah Crawford worthy of being named Offensive Player of the Game and a defense that limited Yoakum to 14 points, Mineola never trailed in an eventual 35-14 win Thursday at AT&T Stadium.

After being denied state glory two years ago in this game and in this stadium, Mineola's coaches, players and fans soaked up the moment that they had waited for.

Crawford led an unbeatable Mineola rushing attack that racked up 438 yards on 51 attempts, many of which came out of a read-option look in which either Crawford or senior Chantz Perkins got the handoff. Crawford turned his carries into 276 yards and four touchdowns with Perkins finishing with 121 yards and a score.

"This is all I wanted. I just won a ring for my coach who doesn't have one yet. It feels great that I can go into the locker room and say that I gave it my all," Crawford said.

Mineola (14-2) was 3 of 4 on fourth downs highlighted by a 40-yard touchdown run by Crawford that gave Mineola a 21-14 lead at halftime, and the Jackets never looked back.

"On fourth down we just buckled down and knew we had to get it. With Chantz and me in the backfield, we look at that sideline every time before we run and look at how far we need to go," Crawford continued. "We are going to get that no matter what, and then we are going to keep running hard. They can't stop somebody that gives it all the whole time in the game."

Mineola's defense held Yoakum (11-5) to 21 yards total in the second half with senior Kourtland Sinches delivering a Defensive Player of the Game performance with two solo tackles, a fumble recovery, a tackle for loss and a sack.

"One of our shirts says ‘11 men on the field, but one heartbeat' and that is basically what it is on defense," Sinches said. "We get after it every day, every second and every hour. That is what we do."

Yoakum reached the state title game by knocking off previously unbeaten Malakoff in the state semifinals, but coach Bo Robinson said the Bulldogs could not slow down Crawford.

"Their little quarterback was faster than we anticipated," said Robinson. "They got to the edge on us and we tried to change some things at halftime and they got some (big plays up the middle). You have to give Mineola credit."

Yoakum senior tailback Henry Enoch rushed for 113 yards, threw a 25-yard touchdown and had five solo tackles. The Bulldogs did everything they could to prevent Mineola from achieving its state championship, but Crawford was not going to allow the Yellowjackets to be denied this time.

He rushed for 141 yards and two touchdowns in the first half, highlighted by a 51-yard run and 40-yard scoring run to help Mineola go into the locker room with a 21-14 lead.

Perkins was also big, using his blazing speed to get on the edge outside of Yoakum's mammoth defensive line to rush for 84 yards and a touchdown in the first two quarters.

Yoakum received similar big plays from tailback Enoch. The 6-1 210-pound senior crashed through tackles, and Mineola defenders were forced to fight through effective stiff-arms to try and bring him down. But not before Enoch broke loose for a 33-yard run on the Bulldogs first scoring drive, which was capped by a 25-yard halfback TD pass from Enoch, and rumbled 64 yards to set up Yoakum's second touchdown.

The Yellowjackets were put to the test early and often with Crawford answering the call. On their opening drive of the game, Mineola faced a fourth-and-7 when Crawford took it himself around the edge and forced his way for a 9-yard gain. After two 10-yard runs by Perkins, Crawford finished it off with a 1-yard touchdown sneak. Cameron Sorenson's PAT made it 7-0 with 7:17 left in the first quarter following the 60-yard 10-play drive.

Enoch provided Yoakum's response, busting loose on second-and-9 for 33 yards as the Bulldogs went 82 yards in 12 plays. Yoakum also converted a fourth down on the drive with quarterback Bryson Hagan getting three years on a sneak on fourth-and-inches. Enoch showed off his passing with a perfect 25-yard strike to Jordan Moore to help tie the game 7-7 with 56 seconds left in the second quarter.

Crawford raised Enoch and delivered a 51-yard weaving run of his own before Perkins cashed in from 6 yards out in the opening play of the second quarter to make it 14-7.

Then Mineola forced a fumble with Sinches giving the Jackets the ball back at Yoakum's 49.

Enoch's 64-yard run helped Yoakum tie the game, but not in the conventional way. On first-and-10 from the 19, Tyron Brooks cruised through the middle for a 17-yard run, but then fumbled near the goal line. An alert Jordan Moore scooped it up and scored on a 1-yard fumble return. The PAT made it 14-14 with 5:09 left in the half.

With Yoakum getting the ball to start the second half, Mineola needed to take control back late in the second quarter. Facing fourth-and-1 from the Yoakum 40, Crawford faked a handoff to Perkins and took it himself up the middle untouched for a 40-yard TD to give the Jackets a 21-14 lead at the break.

Mineola shut Yoakum's offense down in the second half while the Yellowjackets got a 65-yard run by Crawford, who was only denied a longer touchdown by the hustle of Enoch to tackle him. Crawford scored two plays later for a 28-14 Mineola lead with 8:26 left in the third quarter.

Yoakum, trying to get anything going, went to the Wildcat and did not fare much better against a determined Mineola defense.

The Jackets then got the ball and produced a clock-draining drive that survived a controversial call on fourth down in which Perkins fumbled the ball and was returned for a touchdown by a Yoakum defender before the referee ruled the Yoakum defender touched the ball with his foot out of bounds. The play gave the Yellowjackets a first down. Crawford scored on the next play to salt the game away and begin the celebrations.

It was the end of a journey for Mineola, and for Drennon, who already was being asked if Mineola could repeat next year.

"We are going to take this back to Mineola and have us a parade on Saturday," Drennon said.

Class 3A Division I State Championship