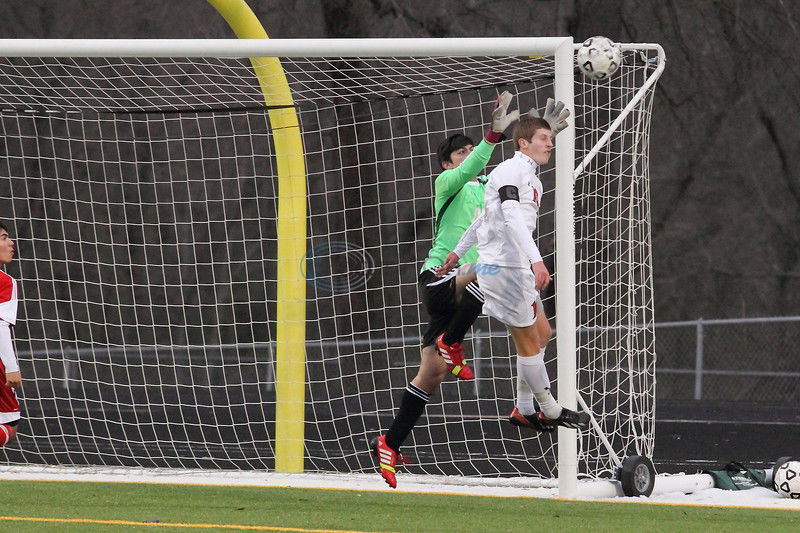 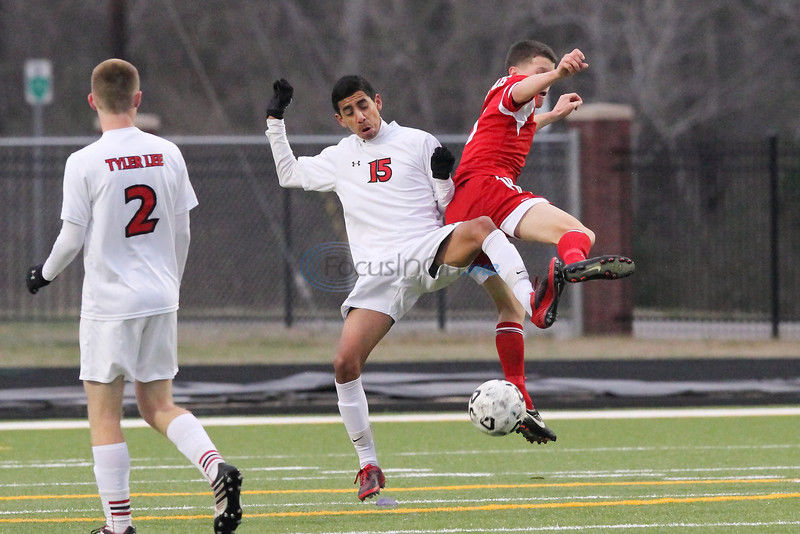 Mesquite Horn delivered the only goal on a frigid Wednesday as the Robert E. Lee suffered its third straight setback, 1-0, at Red Raider Field.

The Red Raiders were second-best in the opening 40 minutes and trailed 1-0 at halftime, but responded in the second half with several goal-scoring chances. All of them were either saved by Horn's keeper or missed narrowly wide or high.

"I think we struggled with our passing game in the final third, especially in the first half," Lee coach Marty Germany said. "It was just bad choices or poor quality and we couldn't really get anything on goal. The second half was a little bit better, but we need more of a sense of urgency and a little more work rate than we had tonight."

Case Carnes nearly gave Lee the lead at the 25 minute mark of the first half when he was inches away from getting his head to a cross. Horn keeper Anthony Tharp was quick to diagnose the danger and cut in front of Carnes at the near post.

A minute later, Horn capitalized on some possession to produce the only goal. A Jaguars player was fouled outside of the box, but the referee played advantage. This allowed a shot that was blocked, but the rebound came out to Erik Macias and his one-timed follow from 40 yards out was a thing of beauty that left Lee keeper Daniel Abarca no chance.

Despite creating little the remainder of the half, Lee forced Tharp into one of the better saves of the game. A ball was played into the box and Will Arnold beat his man and got a head to it, but the ball went straight to Tharp.

In the second half, Daniel Schulze put a header on goal off a cross, but again the ball was headed right at the Horn keeper. With 16 minutes remaining, Carnes thought he'd scored the equalizer when his one-timer off a cross looked destined for the corner, but Tharp reacted quickly and saved it.

"It came down to one shot (for them) and we had one or two decent chances and just couldn't put one in," Germany said. "I told them after the game that the loss was disappointing, but we are still tied with North Mesquite for fourth so technically are in a playoff spot since we beat North in our first meeting.

"We need to clean a couple things up and increase our work rate (and we will be fine)."

The Red Raiders next face Mesquite, a team Lee beat 6-0 in its first meeting. The game is slated for 7 p.m. Friday at E.H. Hanby Stadium in Mesquite.

MESQUITE — Robert E. Lee girls soccer was able to break its goalless drought, but not its losing streak, falling 2-1 in an overtime heartbreaker at Wednesday at E.H. Hanby Stadium.

The Lady Raiders trailed 1-0 at halftime before grabbing a goal back on a penalty kick in the second half. Freshman Alex Bice got behind the Lady Jags defense and was brought down in the box.

The referee pointed to the spot and Lee's Ariel Howells did the honors.

It was Lee's first goal in four games and tied things up at 1-1.

The Lady Raiders thought they had taken the lead later in the second half on a header by Mallory Curtis. But the ball was judged not to have crossed the line.

Adrianna Perez then blasted a shot that missed the top corner of the net by inches and Bice found some space and let loose with shots on target.

None of them found their mark.

The teams finished regulation in a tie and it stayed that way through the first half of overtime. In the second half, however, a Horn player navigated her way past the Lee defense and scored what would end up being the game-winning goal.

"We had some chances and got the first one, but we just couldn't get a second one," said REL coach Chris Woodard. "They had a good team. They weren't the same team we played the first time. I thought we played hard. It was a close game and we ended up a little bit short."

It is Lee's fourth loss in a row and leaves the Lady Raiders in sixth place. REL is not mathematically eliminated from fourth place and the final playoff spot, but it will take some doing.

"We have three games left and we have to win out and hope for some help from other scores," Woodard said.