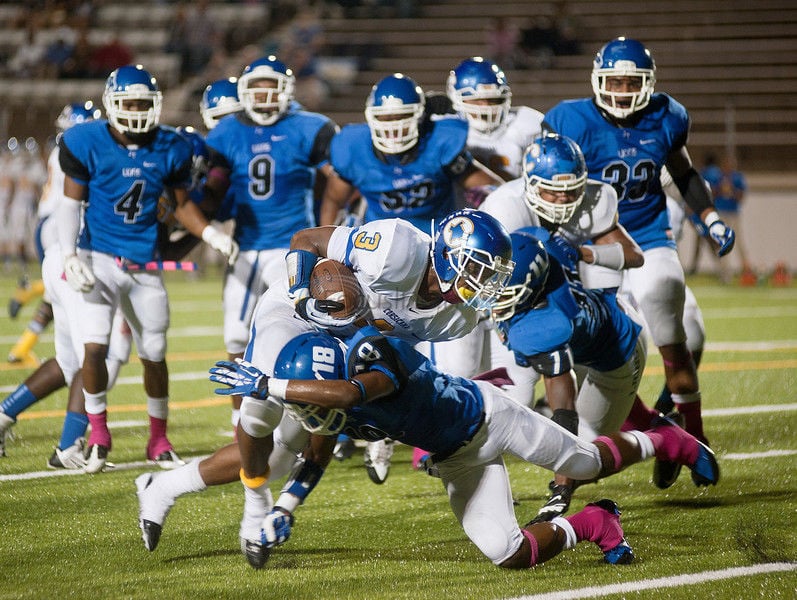 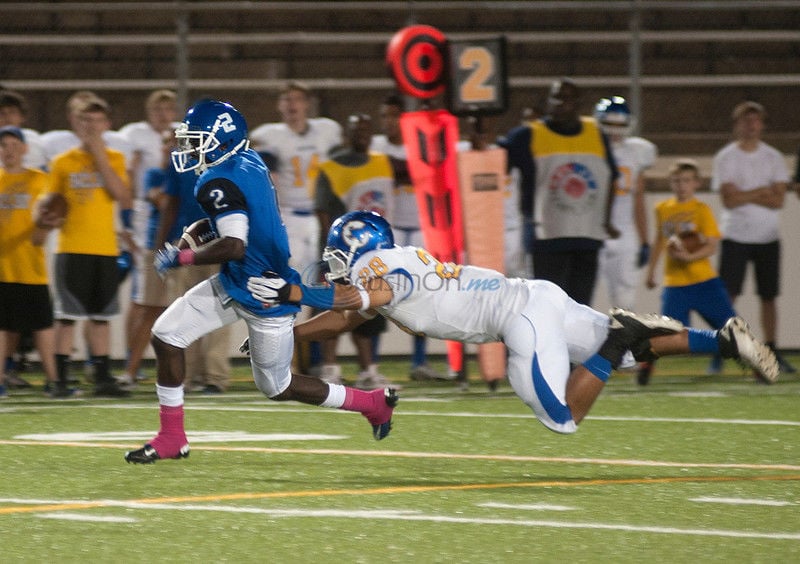 The start was remarkably different, but the end result was nonetheless the same.

A year after jumping all over Corsicana early, John Tyler fell behind by 14 points in the first quarter before scoring 44 straight for a 51-22 victory Friday at Trinity Mother Frances Rose Stadium.

The Lions (4-2, 1-0) claimed their 20th straight league victory in the District 16-4A opener at Earl Campbell Field.

After that, however, the Lions made defensive adjustments and dominated the remainder of the game.

Junior quarterback Geovari McCollister completed 12 of 14 passes for 237 yards and two touchdowns, at one point completing 11 straight attempts. He added a team-high 103 yards rushing to go with another score. Reggie Gipson ran for two touchdowns, while Jeremy Wilson and Nick Cain both caught a touchdown and ran one in. Wilson tallied 111 total yards while Cain and Gipson had 92 apiece.

Corsicana sophomore Lamontra Owens, who ran for 1,054 yards and 10 touchdowns in three games prior, including 467 in his last game, ran on the Tigers' first two plays but came off the field and did not return. Owens had his right shoe off with ice on his ankle soon after. He was suited up in the second half but never made it off the sideline.

Despite the injury, the Tigers racked up 10 first downs on their first two drives. Of their 172 yards on those two series, three came through the air. Backup Donovan Fields rushed for a game-high 206 yards and a touchdown on 33 carries, 144 yards coming in the first half.

After going ahead 14-0, Corsicana managed one more first down in the first half as the Lions defense held the Tigers to 30 yards in the second quarter.

During JT's 44-0 spree, the Lions amassed 410 of their 431 yards while holding the Tigers to 93. Sparking the JT defense were Jaylon Reese (interception), Bryston Gipson (fumble recovery) and Malik Hubbard (sack).

"(We were) making sure that our front made the right adjustments to what they were doing as far as the blocking scheme," Holmes said. "Once we got that nailed out we pretty much took care of the game."

Corsicana ate up 311 yards on the ground for 21 first downs. Quarterback Devontay Bell added 66 yards and two touchdowns rushing to go with 35 yards through the air.

With the Tigers using their ground game to control the clock, the Lions utilized quick strikes. JT's seven touchdown drives averaged four plays, with none lasting more than three minutes. JT came into the game running 64 plays per game but snapped the ball 41 times on Friday, averaging a season-best 10.5 yards per play.

"We kept scoring and the defense got stops — that's how we got the victory," Cain said.

After Jose Perez kicked a 32-yard field goal to put the Lions on the board early in the second quarter, JT grabbed its first touchdown on a 6-yard run by Gipson. The score was set up by Wilson, who showed off his speed by taking a screen pass 54 yards.

The Lions started the second half with two touchdowns in less than six minutes. After McCollister completed a 31-yard pass to Gipson, the junior quarterback kept it himself for a 42-yard touchdown. McCollister used a pump fake to spring free and ran behind a strong block from Nick Cain down field. After a Corsicana turnover on downs, Gipson ripped off a long touchdown run, scoring up the middle from 48 yards for a 30-14 advantage.

Wilson added a 37-yard haul from McCollister and Cain, in at back-up quarterback late, juked his way in from 22 yards.

The Lions return to Rose Stadium for homecoming against Lindale next week.

"It feels great," senior safety Terry Ausborne said of opening district with a win. "We've still got a lot of stuff to work on, but good thing we got the ‘W.' Now we've got to get ready for Lindale next week."