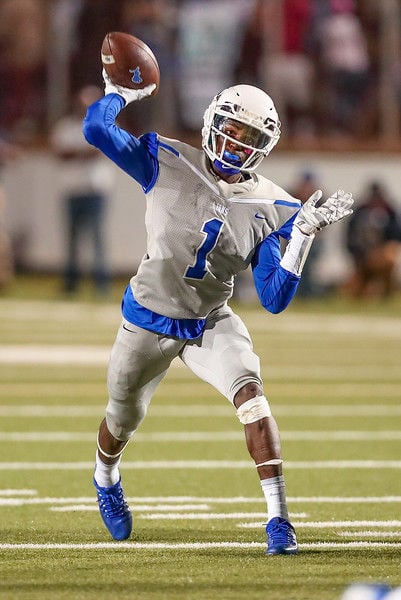 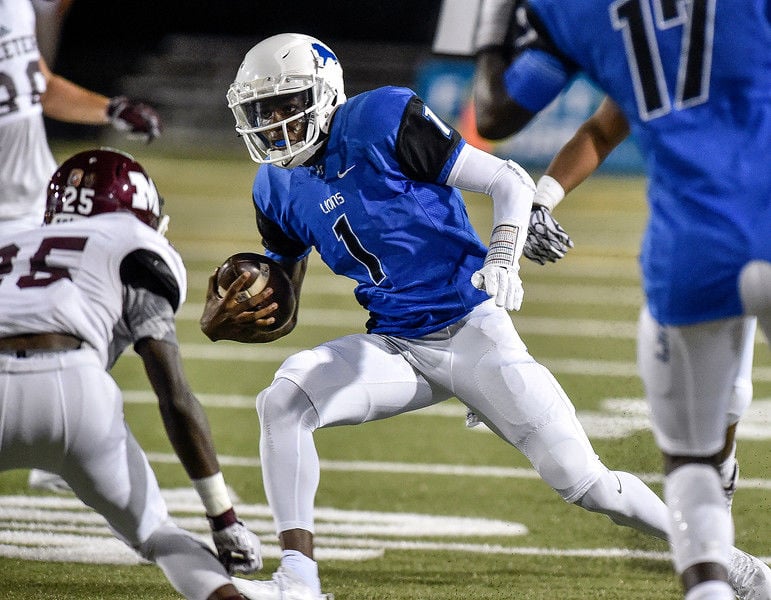 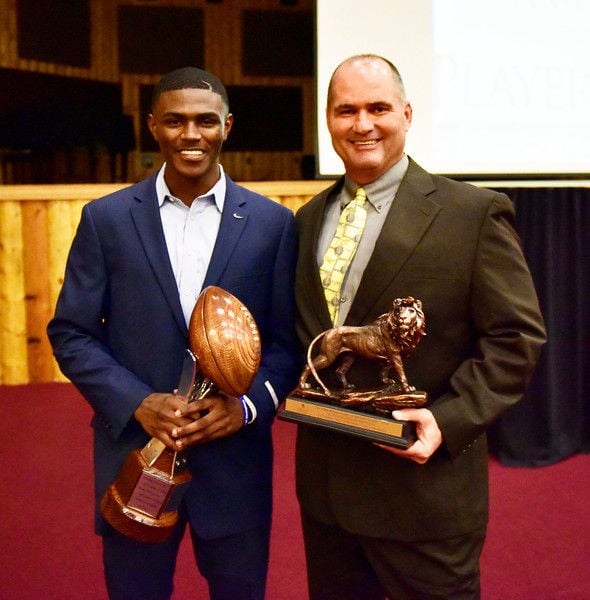 Player of the year Bryson Smith of John Tyler and Coach of the year Joe Drennon Athletic Director of Mineola. Correspondent/Noah Morris 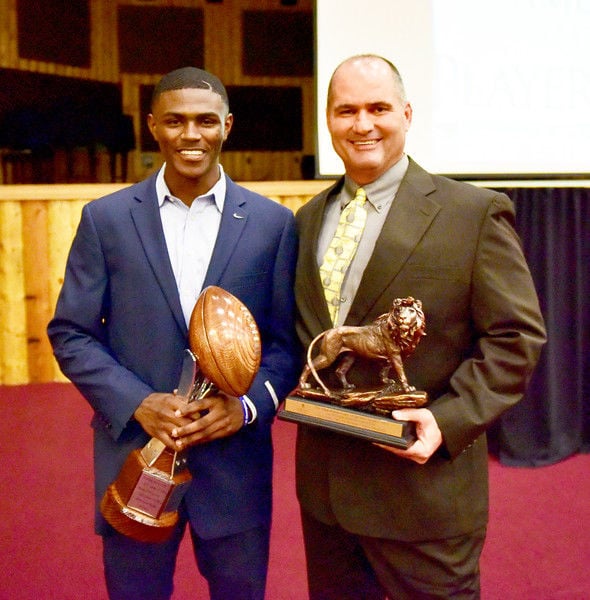 American State Bank Player of the Year Bryson Smith of John Tyler and Coach of the Year and Joe Drennon, HC/Athletic Director of Mineola. (Noah Morris/Correspondent) 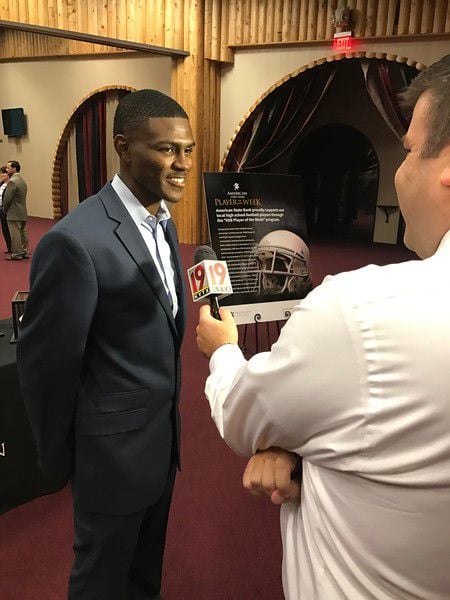 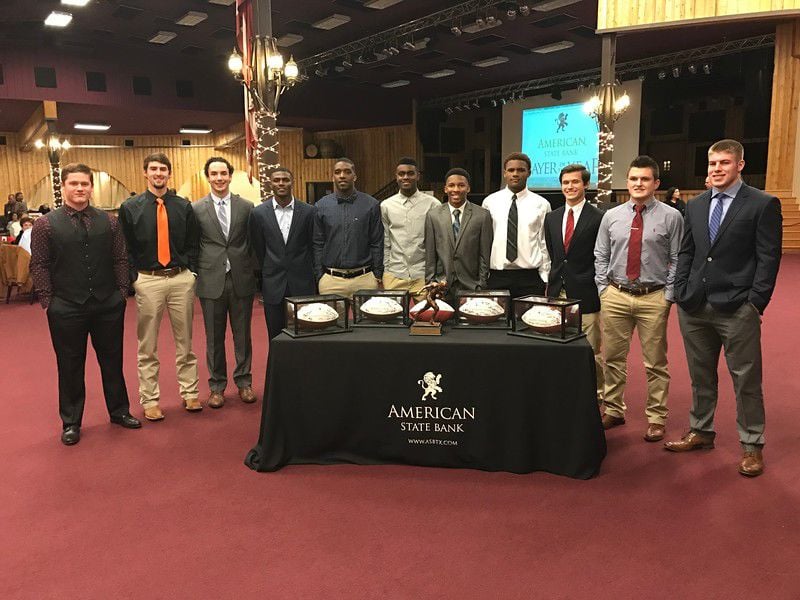 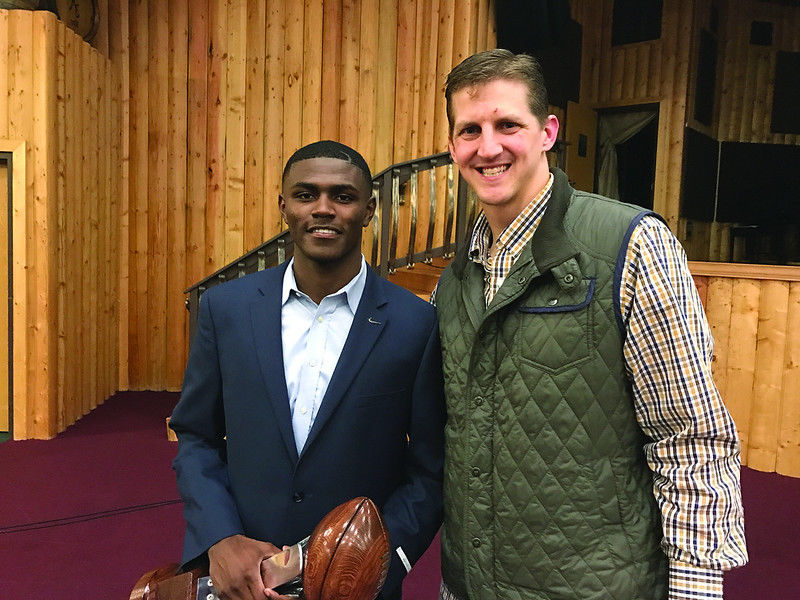 Player of the year Bryson Smith of John Tyler and Coach of the year Joe Drennon Athletic Director of Mineola. Correspondent/Noah Morris

American State Bank Player of the Year Bryson Smith of John Tyler and Coach of the Year and Joe Drennon, HC/Athletic Director of Mineola. (Noah Morris/Correspondent)

BULLARD - For the second straight year, Bryson Smith and Joe Drennon were the big winners at the fifth annual American State Bank Player of the Year banquet on Thursday at KE Bushman's Celebration Center.

Smith, John Tyler's record-setting quarterback, was named the ASB Player of the Year. The senior stated he was still committed to the University of Houston and coach Major Applewhite despite Texas coach Tom Herman being in town on Thursday to try to persuade Smith to come to Austin.

Smith became the second two-time winner, joining Patrick Mahomes II of Whitehouse who won the award in 2012 and 2013. Zach Hall of Robert E. Lee won the honor in 2014.

Drennon, who led Mineola to the 2016 Class 3A Division I state title, won the Allen Wilson Coach of the Year. The award is named for the longtime John Tyler football coach and Drennon won the inaugural Wilson trophy last year.

Tim Haugh, ASB vice president of consumer lending and head of the ASB Player of the Year program, presented the awards.

"First, I want to thank God," said Smith, who is presented a $10,000 scholarship. "I want to thank coach (Ricklan) Holmes (JT coach) for pushing me to be the best I can be, my family, teammates and all my coaches. I also want to thank American State Bank."

Drennon said he was honored to earn the coaching award. He thanked ASB and his wife.

McCown told the players that "the decisions they make and don't make are essential to succeeding or not."

McCown noted he had a vision of wanting to be an NFL player since the second grade. He told the players that "there's a higher percentage of being struck by lightning and being eaten by a great white shark on the same day than it is to make it in the NFL."

Focus and doing things right are the keys.

He said there is a reason that he and his brother Josh (of the Cleveland Browns) are still in the NFL. "God wanted us to spread the gospel of Jesus Christ."

Haugh added "It has again been my honor and privilege to be able to honor all the weekly winners," Haugh said,

Haugh noted the program is intended to recognize the players of East Texas as well as help the parents with the young men's expenses while in college.

NOTES: The Purple Pig BBQ catered the event and a slide show of the weekly winners was presented by CBS19.