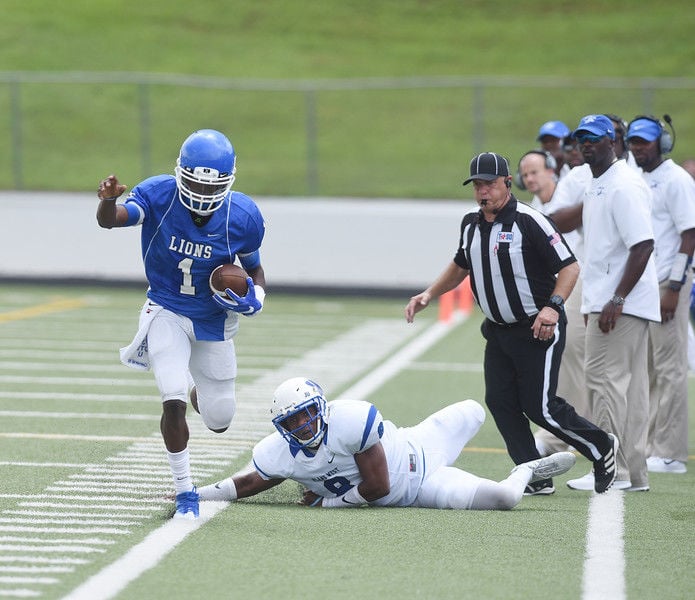 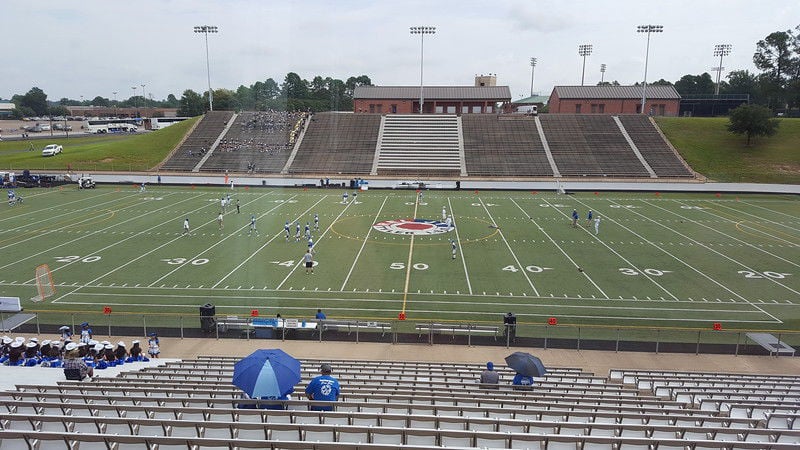 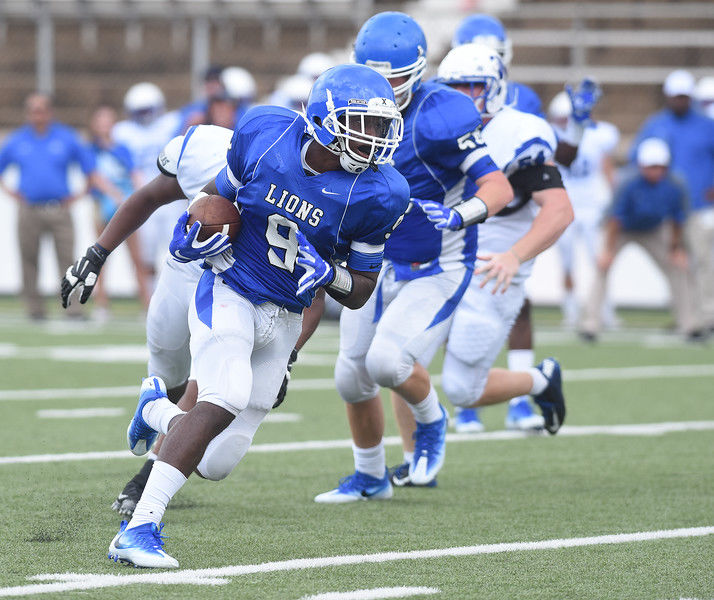 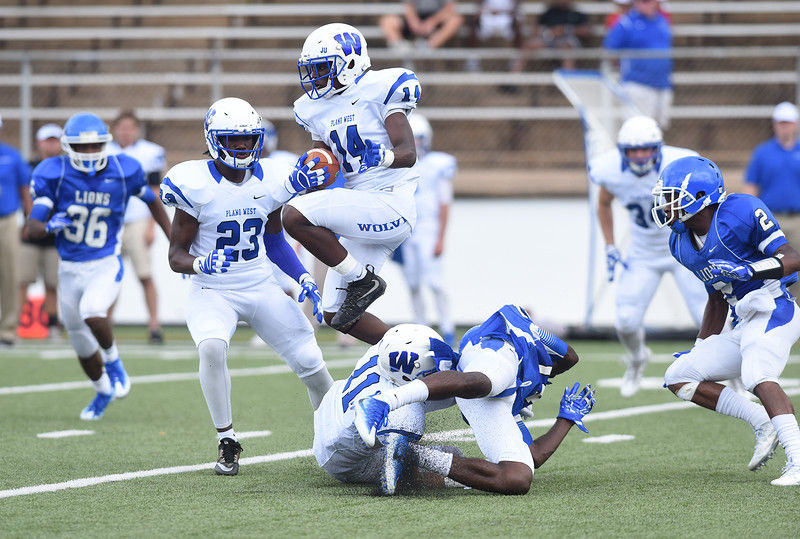 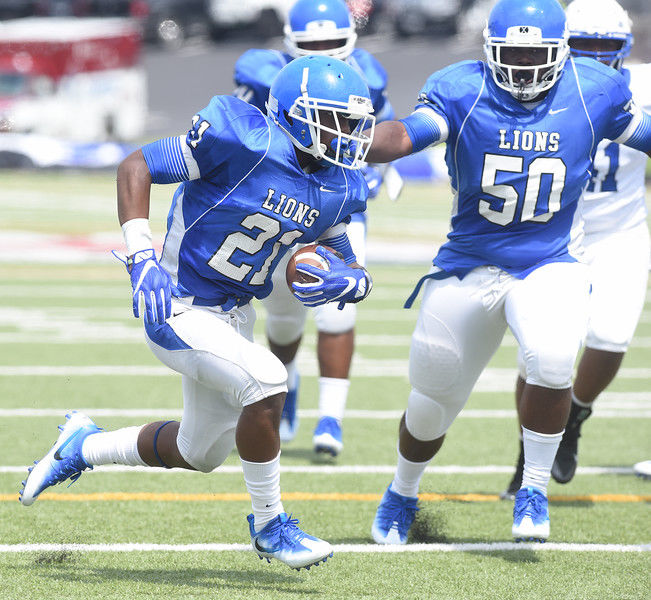 John Tyler coach Ricklan Holmes never showed any sort of worry about his team's move from Class 5A to 6A.

Despite being one of the smaller schools in the classification, the Lions showed they are more than prepared to compete, defeating the second-largest school in the state, Plano West, 45-14 on Saturday afternoon at Christus Trinity Mother Frances Rose Stadium.

"We just wanted to come out with a bang, let them know we're here," JT junior defensive end Dekalen Goodson said. "Just because we're in 6A don't mean nothing's changed. We're still the same John Tyler as we were in 5A."

John Tyler's win in its 6A debut came in the finale of the CTMF Football Classic on Earl Campbell Field following games Thursday and Friday. The Lions followed rival Robert E. Lee's lead with a dominating defensive performance after the Red Raiders beat Marshall 34-7 on Friday combined with some of the offensive explosiveness seen in Gilmer's 61-55 win over Liberty-Eylau on Thursday.

The West Wolves (0-1) averaged 3.8 yards per play and managed 1 yard in the entire third quarter, during which time the Lions (1-0) scored three touchdowns.

"They came out with a passion to dominate," Holmes said of the JT stop unit.

"They played a heck of a game," JT quarterback Bryson Smith said. "If they keep doing that, man, we could be a deadly team going down the stretch."

Smith himself had a solid game, though he admitted the offense has room for improvement. He completed 13 of 23 passes for 276 yards and four touchdowns, though he was picked off once. The Houston commit added 73 yards and a touchdown on the ground.

Damion Miller showed why he's committed to Texas with 133 yards and two touchdowns on four receptions, the second a 70-yard burst down the left sideline. Michael Givens-Washington had a game-high five receptions for 103 yards while also excelling in the return game.

The Lions finished with 407 yards (compared to 282 for the Wolves) but were hampered by 85 yards of penalties on 14 flags, 10 of which were in the first half.

"We had too many flags, too many mental mistakes," Smith said. "That's something we can improve on.

"We have a whole lot to improve, especially with the timing right now. We've got to put in a lot of time after practice and during practice. So we've just got a lot to work on. The sky's the limit if we do that."

Da'Vonte Carline paced the Plano West offense with 82 yards on 23 carries. Starting quarterback Tanner Gillean threw for 49 yards ran for 59, including a 1-yard TD run and a 60-yard jaunt in the first quarter.

Gillean's backup, Jake Sweeney, completed 3 of 4 passes for 83 yards and a late touchdown against JT's second-string defense for a consolation score with 25 seconds left.

After six years in the second-largest classification, John Tyler started out life in Class 6A with a bang, jumping out to a 14-0 lead thanks to big plays from its defense.

On the opening drive, Marshall recovered a fumble on a mishandled snap. Smith then hit Givens-Washington for a 40-yard gain and two plays later he threw a short pass to running back Cameron Grant, who scampered in from 13 yards for the sophomore's first varsity touchdown.

Later in the first quarter, Kennedy blocked a punt recovered by Kelton McGee at the 15. On the next play from scrimmage, transfer Justin Samples followed his blockers for a 15-yard touchdown run.

Though Plano West pulled within 14-7 early in the second quarter with Gillean's score, John Tyler led 17-7 at halftime on a 38-yard field goal by Devan Salazar on an untimed down after a pass interference call on West before the break.

Holmes said he challenged his team at halftime and the Lions responded, scoring two touchdowns in the first three minutes.

Devlen Woods sparked the offense by returning the opening kickoff 37 yards. After two incompletions, Bryson Smith ran for 18 yards then for a 25-yard touchdown, the latter coming thanks to downfield blocking from receiver Jaivon Williams.

John Tyler increased its lead to 31-7 at the 9:14 mark in the third after forcing a three-and-out aided by a big hit by linebacker McGee. Plano West was unable to get a punt off, with the kicker taken down in the backfield to give JT the ball at the 17.

Two plays later, Smith tossed a ball into the end zone where Miller went over his defender to make the 18-yard touchdown reception and the rout was on.

"I told them, if y'all want to be the great team that you say you can be, you've got to go out here and prove it," Holmes said.

The Lions certainly proved they belong in the state's highest classification, though their next game against a 6A team won't be until the District 11-6A opener against Rockwall on Sept. 16.

Next up is a clash with former 5A district rival Ennis before heading to Shreveport, Louisiana, to play Warren Easton out of New Orleans.