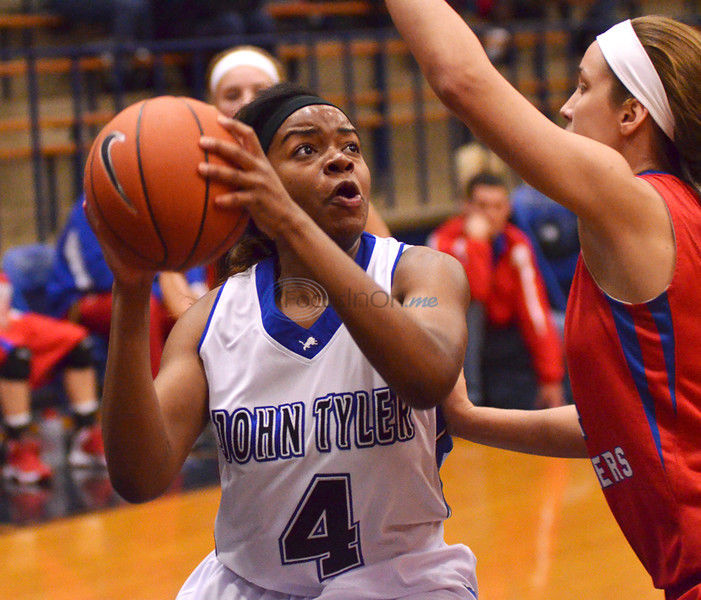 Senior Kayla Webb rebounds the ball under the hoop and looks for another shot. (Victor Texcucano) 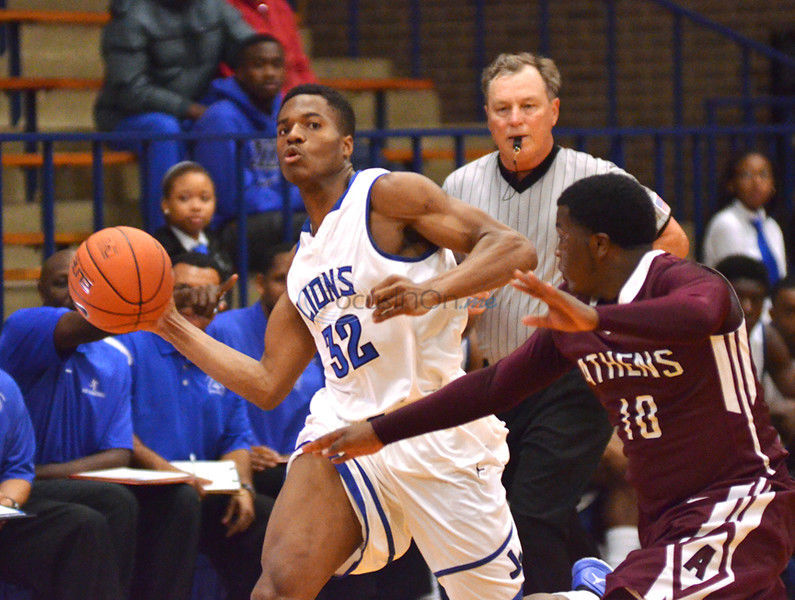 Senior Kayla Webb rebounds the ball under the hoop and looks for another shot. (Victor Texcucano)

John Tyler hosted a boys and girls basketball doubleheader at the Lions Den on a cold and rainy Monday afternoon.

The Lady Lions were stopped by Alba-Golden, 59-52, as Lady Panther sharp-shooter Macie Arrington nailed seven 3-pointers to lead all scorers with 33 points.

In the finale, the Hornets proved to be a 3A team to contend with as the visitors defeated the Lions 87-82 with Hornet guards Ryan Jefferson and Anthony Sanders combining for 64 points.

The Lady Lions (4-2) will be back in action today as they play cross-town rival Robert E. Lee at noon at Tyler Junior College's Wagstaff Gymnasium.

The Lions will face Flower Mound Marcus with tip-off set for 3:30 p.m. in Flower Mound. Athens return to play against Corsicana at home today with a 7:30 p.m. tipoff scheduled.

The Lady Panthers of Alba-Golden remain undefeated after holding on for a seven-point win.

Arrington was on fire from the field the entire game, canning 32-points.

"They played a great game," JT head coach Mike Smith said. "We had five crucial turnovers in the last few minutes that really killed us.

"But I'm looking forward to the season. The girls are getting better every time we play and they are working really hard."

The Lady Lions jumped out to a 19-7 advantage after one period behind five points each from Jermonique Ward and Ashtyn Beal.

Arrington took over in the second period, scoring 24 points with five treys to give the Lady Hornets a 35-30 lead at the break.

The JT defense stiffened in the third period as the home side tied things up, 44-44, entering the fourth periods.

But John Tyler could manage only one field goal in its cold-shooting final quarter and Arrington put up eight points down the stretch to seal the win for Alba-Golden.

Beal led the Lady Lions in scoring with 16 points while Ward added 11 points.

You would have never thought that coming into the Monday matinee at the Lions Den, that Athens had only one game under their belts. Thanks to 35 points from Anthony Sanders and 29 by Ryan Jefferson, the Hornets were able to complete a sweep by visiting teams.

JT (2-3) began the game ice cold from the floor and Athens took advantage to lead 19-15 after the first quarter.

In the period, the Lions began to warm up and took the lead after a running jumper by Martese Christian tied the game at 32-32 with Athens leading 34-33 at the halftime break.

Athens came out smoking to start the second half, posting nine straight points to push out even further, 43-33. Sanders and Jefferson couldn't be stopped, combining for 21 points to keep the Lions on the back foot, 58-50, entering the fourth and final period.

The Lions outscored Athens in the final frame, but the combination of Sanders and Jefferson would not be denied as Athens pulled out a seven-point victory.

Said JT coach Cedeno Clark about the Lions: "We just need to improve right now in every area."

Keaunte Humber scored 10 of his 12 points in the first half, while Kevron Johnson heated up late to score 11 of his team-high 17 points in the second half.