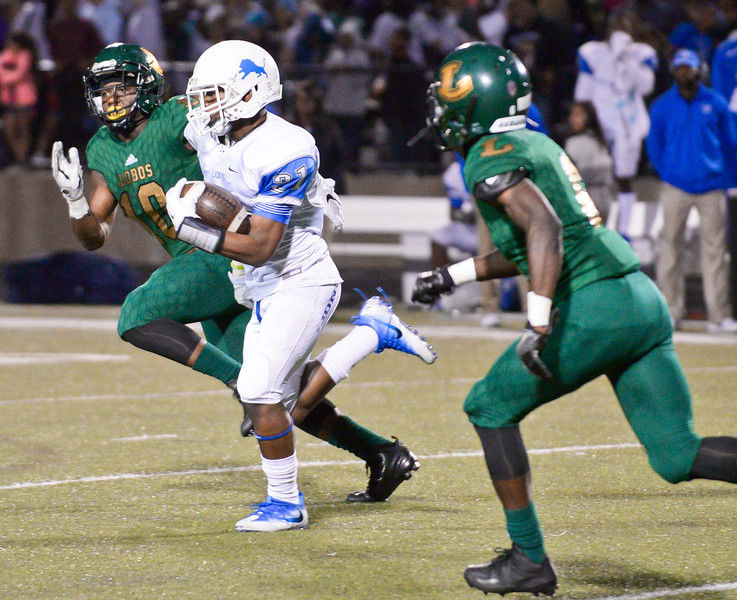 John Tyler's Cameron Grant (21) picks up a first down during Friday's October 21, 2016 game against the Lobos in Longview. (Les Hassell/News-Journal Photo) 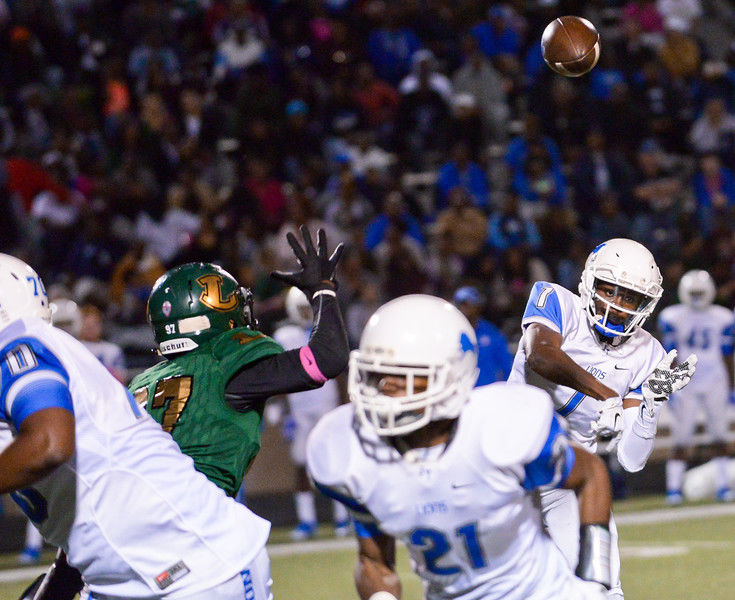 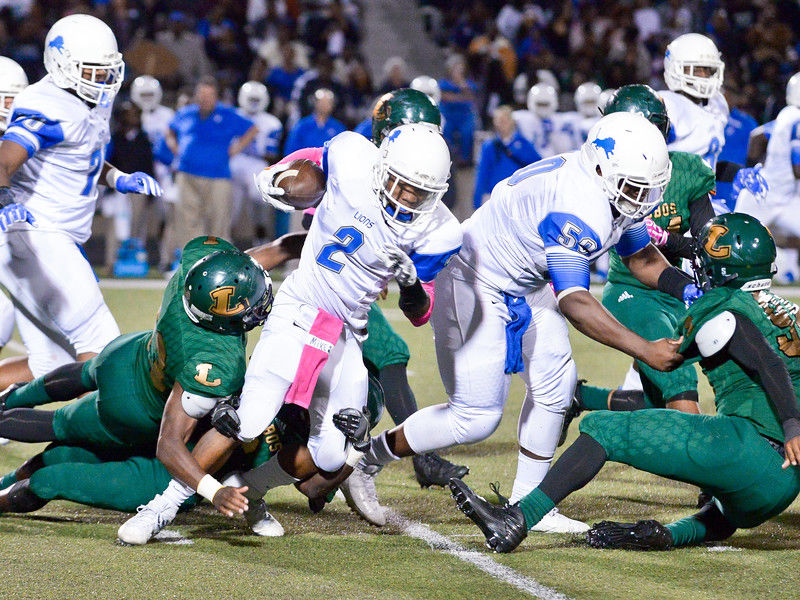 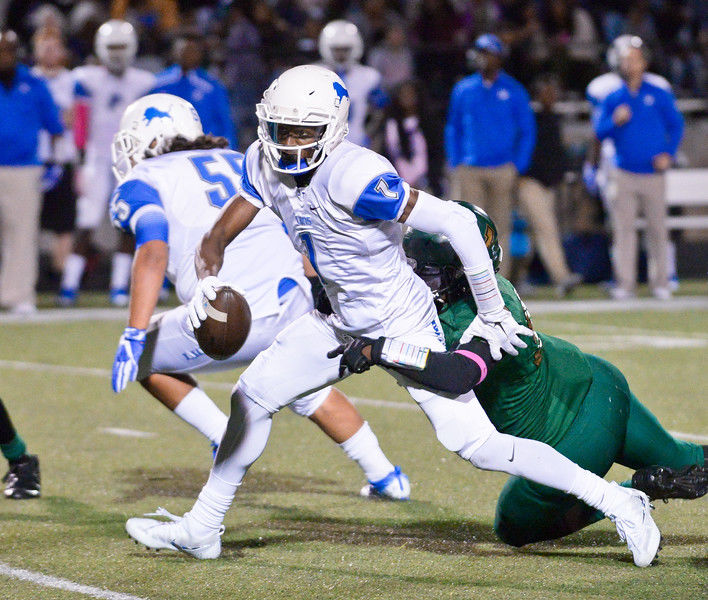 John Tyler's Bryson Smith (1) is brought down at the line of scrimmage during Friday's October 21, 2016 game against the Lobos in Longview. (Les Hassell/News-Journal Photo) 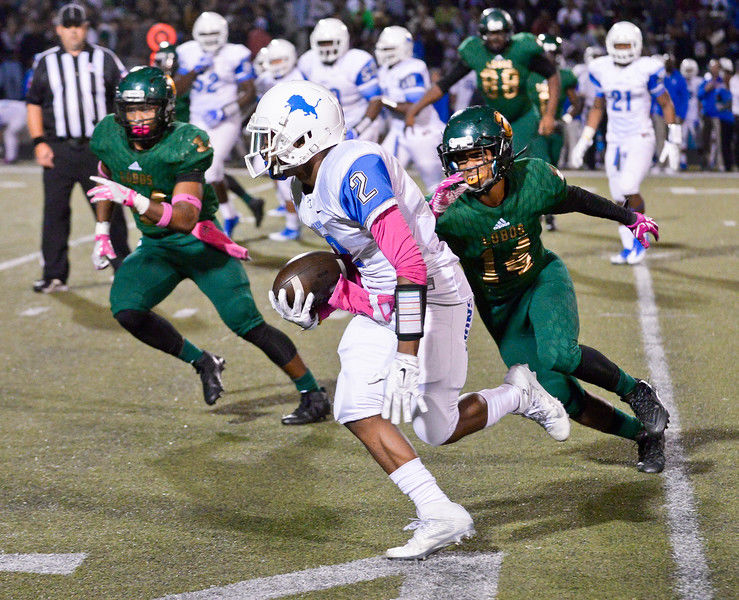 John Tyler's Michael Givens-Washington (2) breaks around the end during Friday's October 21, 2016 game against the Lobos in Longview. (Les Hassell/News-Journal Photo)

John Tyler's Cameron Grant (21) picks up a first down during Friday's October 21, 2016 game against the Lobos in Longview. (Les Hassell/News-Journal Photo)

John Tyler's Bryson Smith (1) is brought down at the line of scrimmage during Friday's October 21, 2016 game against the Lobos in Longview. (Les Hassell/News-Journal Photo)

John Tyler's Michael Givens-Washington (2) breaks around the end during Friday's October 21, 2016 game against the Lobos in Longview. (Les Hassell/News-Journal Photo)

LONGVIEW — It's rare for a team to beat Longview in district play, never mind at Lobo Stadium.

John Tyler is starting to show it's a rare team indeed.

In a matchup of the league's top two teams, John Tyler won in the trenches on both sides to claim a 38-24 victory over Longview and take control of the District 11-6A race with two games remaining on Friday at Lobo Stadium.

The victory pulled JT even with Longview atop the 11-6A standings but with the head-to-head tiebreaker. It also gave the Lions a win in the Great American Rivalry Series for the second time in three years, having won the same award in a win at Longview in 2014.

Longview coach John King, who has won at least a share of the district title in 12 of his 13 seasons, fell to 59-5 at home, with three of those losses to JT. The Lobos' last district home loss came in 2003.

"We came here, did what we had to do and got the win," Grant said.

It was the sophomore's third straight 100-yard game.

Texas commit Damion Miller had a season-high seven receptions for 90 yards with a 7-yard touchdown. Michael Givens-Washington added 80 yards on four catches while Devlen Woods had 48 yards on five catches.

"We were run, run, run, then we hit them with a pass," Grant said. "We just expanded the playbook and they didn't know what was coming; they didn't adjust."

As strong as the JT offense was in racking up 562 yards, the defense came up with big stops when called upon, limiting Longview to 354 yards and a season-low 24 points. (The Lobos also scored 24 in their only other loss, 35-24 to Lufkin.)

Longview came in averaging 335.6 yards per game on the ground and 465.1 overall but couldn't find enough consistency against JT, averaging 4.6 yards per rush. Kendrevian White led the Lobos with 122 yards and a score on the ground but no one else on his team had more than 25 yards rushing.

While both teams averaged nearly the same yardage per play (JT 7.6, Longview 7.2), the Lions converted 10 of 15 third downs and 2 of 2 fourth downs. The Lobos converted 1 of 7 third downs.

John Tyler led 21-10 late in the second half when the Lions stop unit came up with the game's biggest momentum shift.

The Lobos offensive line was pushing the Lions around and reached the JT 2. But on second-and-1 Longview fumbled the snap and Howard Hawkins fell on it with 1:39 left in the half, leaving the score 21-10 at the break.

"The football was on the ground and I just noticed it and I picked it up," Hawkins said. "It was a big change for the defense."

Longview came out in the second half and scored on the first series to make it 21-17 — without the fumble recovery the Lobos might have had the lead at that point.

"That was huge," Holmes said of the fumble. "You've gotta have that momentum going into halftime."

Instead, Devan Salazar kicked a 38-yard field goal to restore a seven-point advantage and the defense allowed 28 yards on Longview's next three series as the Lions pulled away.

John Tyler's Martrevious Allison helped put the game out of reach with a 1-yard touchdown run with 2:58 to play, though Longview wasn't quite ready to call it a night.

The Lobos answered with a 71-yard touchdown toss from Gaylon Wiley to Jaylin Brown with 2:12 left, but Javontavius Mosley calmly recovered the ensuing onside kick.

The Lions then ran out the clock thanks to a wild play from the best playmaker on the field, Smith.

On fourth-and-3 near midfield, Smith dropped back but had the ball knocked away from him. The senior nonchalantly scooped it up, ran away from the pressure and completed a 16-yard strike to Jaivon Williams for the first down to seal the win.

"He's a special kid and he does some special things and I'm glad he's on my team and I'm not going against him."

At this rate, no one will want to go against Smith and the Lions.