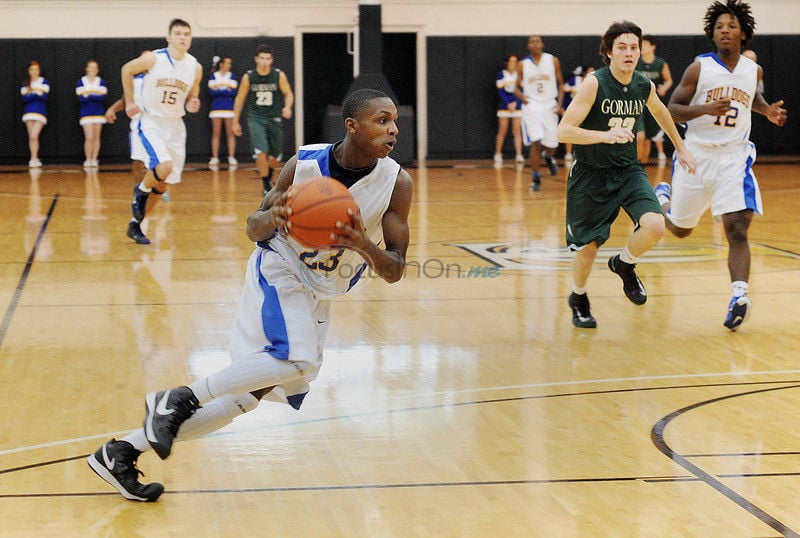 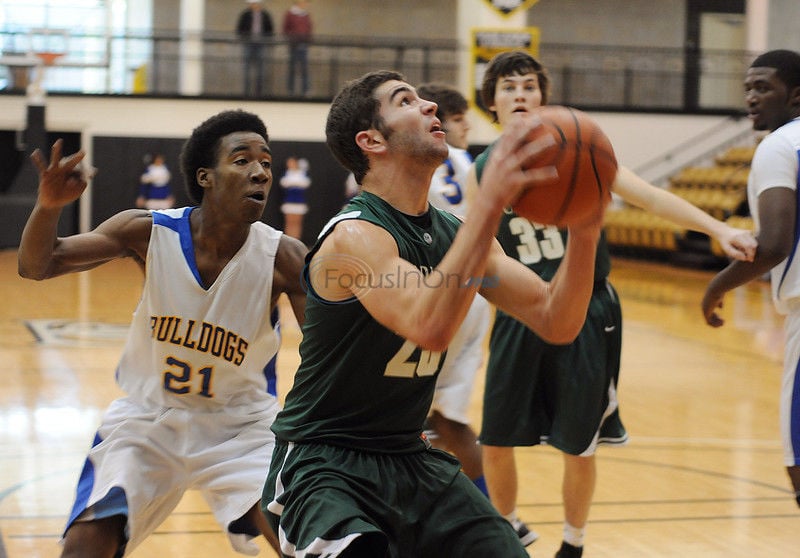 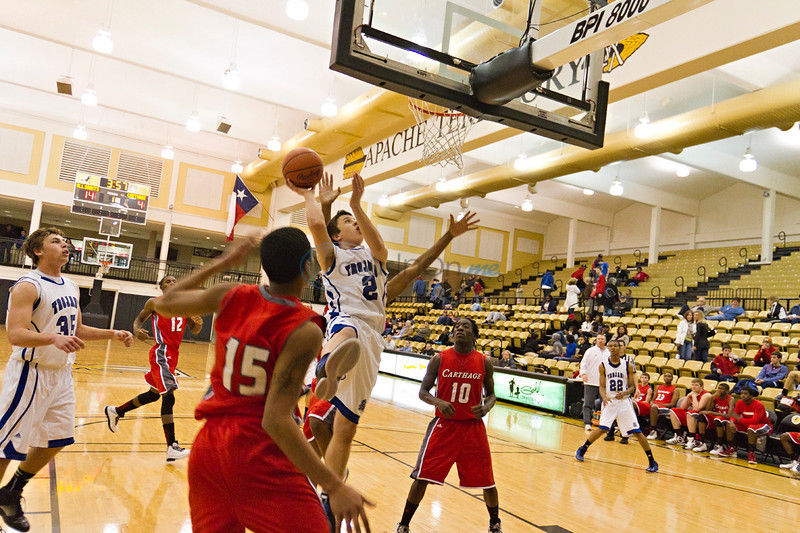 The same could be said for Bowser.

The senior finished with a game-high 30 points to spearhead the Lions’ 67-55 victory against North Forney on the opening night of the Wagstaff Holiday Classic at Tyler Junior College’s Wagstaff Gymnasium.

Bowser, who missed most of non-district because of football, helped JT take control in the second half in the first round of the Apache Bracket (round robin). The Lions (4-11) will look to keep the momentum going against Bullard at 8 p.m. today.

Bowser, a dominant defensive lineman during the football team’s trip to the Class 4A Division I semifinals, used his physicality to overwhelm the Falcons — much like he did against offensive linemen. He scored 17 points in the second half, helping JT turn a six-point halftime lead into a 17-point advantage at one point in the fourth quarter.

Keaunte Humber, a junior, contributed 13 points for the Lions, who took over late in the second quarter and withstood North Forney’s repeated comeback attempts in the second half. Fellow junior Jordan Caldwell also represented the Lions in double figures.

JT closed the opening half with a 9-0 run, turning a three-point deficit into a 35-29 lead at the break. At the forefront of the surge was Bowser, who scored nine points in the second quarter and start to assert himself in the interior.

Bowser finished the half with 13 points, scoring the final basket on a jumper with time running out. He added two other baskets during the 9-0 run, which started with about two minutes remaining in the half.

The game went back and forth until then, evidenced by the teams trading leads after the Lions led 18-15 at the end of the first quarter.

Neugent, who scored 13 first-half points, scored on a layup to give the Falcons a 19-18 lead with 6:10 left in the half. The 6-2 senior then added a pair of free throws to put North Forney up 29-26 with 2:08 left, but the Lions took over from that point and controlled the final two minutes.

In the second half, the Lions kept the run going to take a 12-point lead, 43-31, with less than six minutes remaining in the third quarter. But the Falcons closed the gap to 50-47 with 33 seconds left in the third, before Caldwell drained a 3-pointer at the buzzer to extend JT’s lead back to six points.

Ben Flanders drained two free throws with .5 seconds on the clock, lifting King’s Academy to a 50-49 win over Henderson on Thursday in the Wagstaff Holiday Basketball Classic at Tyler Junior College.

The Royal Knights (5-2) advance to the semifinals of the Gold Bracket Tournament at 3 p.m. today. They will face All Saints.

Henderson (1-8) will play in the consolation semifinals at noon today against Carthage.

In the fourth quarter, three key “it could have went either way” plays all registered in the Royal Knights’ favor.

First, a driving layup by Michael White was negated by a charging call, and then with the Lions holding a 49-48 lead, White missed the front end of a one-and-one and the ball bounced out of bounds. After about a 10-second discussion among the officials, the ball was awarded to King’s Academy with 11 seconds left in the game.

A full-court press hampered the Royal Knights’ attempts to bring the ball up court.

After crossing midcourt, Flanders was fouled and it was ruled he was attempting a 3-point shot instead of attempting a pass.

With the clock showing zeros, .5 was put back on the scoreboard.

Although Flanders missed the first free throw attempt, he connected on the following two for the 50-49 lead.

A desperation shot attempt by Henderson hit the backboard and the Royal Knights had the win.

Caleb Sherrod led King’s Academy with 22 points, while Levi Taylor added 10, including eight in the second quarter as the Royal Knights rebounded from a 10-0 deficit.

Daryle Washington led the Lions with 15 points and 10 rebounds, while White added 13.

The Chapel Hill Bulldogs used their height advantage in the final three quarters to defeat Bishop Gorman 76-59 in the opening game of the Wagstaff Holiday Classic.

Bulldog post Michael Harris scored 26 points and Keilon Moore and Keith Moore each scored 14 points to control the paint against the Crusaders.

Julius Hill scored seven points and Harris added six points for the Bulldogs during the spurt that ended on a Hill three-pointer for a 48-35 advantage with 4:03 left in the third period.

The Crusaders pulled within 57-55 on a Ben Ashworth basket with 5:54 left in the contest and the Bulldogs finished on a 19-4 run.

The Crusaders kept it close in the opening half, as Sean Goforth put on a shooting exhibition on in the first half connecting on five three-pointers and 17 points.

Freshman Alex Hale scored a game high 20 points to lead a balance scoring attack for the Guard and Andrew Swink contributed 15 points which 13 came in the third quarter for Brook Hill.

The Guard used 13-2 run midway of the second period when Chase McDermott scored six points and the spurt ended with a Hale basket with a 30-15 lead.

The Cougars cut the deficit to 49-39 when Andrew Melhart hit consecutive three pointers with 2:59 left in third quarter.

Also in double figures for Brook Hill was McDermott with 12 points and Grant Hanks and Phillip Kitt with 11 points each.

Patrick Mahomes scored a game-high 21 points, helping Whitehouse pull away in the second half for a 69-53 win against Terrell in the opening game of the night session.

Mahomes, a junior forward, scored 13 points in the first half alone as the Wildcats built a double-digit lead at the break. He then added eight more points in the third quarter to help increase the advantage to 15 points entering the fourth.

Spencer Shaw contributed 13 points for Whitehouse, which improved to 13-4 on the season and meets North Forney at 6:30 p.m. today.

Court Brown scored 15 points and Mason Terry added 12 as Lindale pulled away in the fourth quarter for a 50-40 win against Bullard in the final game of the night Thursday at Wagstaff Gymnasium.

Brown and Terry helped the Eagles turn a 34-30 lead after three quarters into a 10-point win, which improved them to 6-8 on the season. Kolton Pierce contributed 11 points for Lindale, which faces Terrell at 5 p.m. today in the second round of the Apache Bracket round robin.

Bullard, which fell to 9-9 on the year, is scheduled to face John Tyler at 8 p.m. today.

The Panthers were led by Corbin Howard, who finished with a game-high 17 points. Landen Beckham added 10 points for Bullard, which was limited to three points in the third quarter.

All Saints will meet King’s Academy in the second round at 3 p.m. today, while Carthage will take on Henderson at noon today.