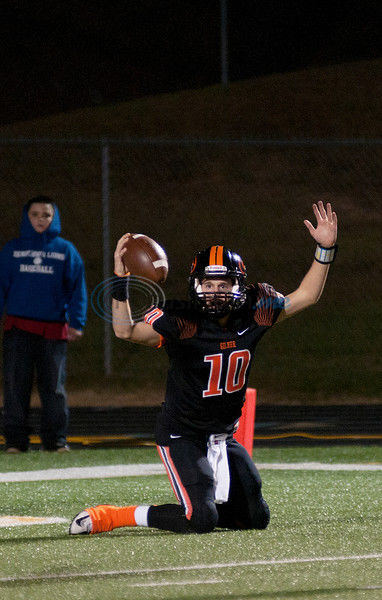 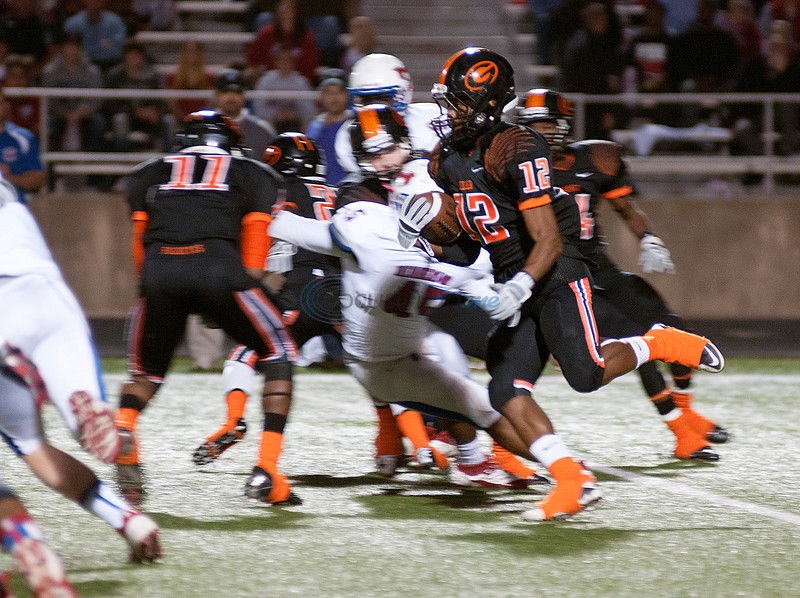 Less than two months after meeting here in a District 16-3A showdown, Gilmer went on a 27-0 run after falling behind big in the first half to set the stage for a 41-34 victory against Henderson in the Class 3A Division II state quarterfinals Friday night before an estimated 13,000 fans at Lobo Stadium.

"It's what our team is all about; we never quit," Gilmer coach Jeff Traylor said. "We take a lot of pride in that and a lot of training goes into that."

The victory advances Gilmer to a state semifinals showdown with Graham (13-1), which beat Gatesville, 40-35, on Friday night in their quarterfinals meeting. The game is set for 7:30 p.m. Friday at Mansfield's Vernon Newsom Stadium.

Gilmer quarterback Tanner Barr enjoyed another big performance in the win, taking advantage of a Lions secondary that lost two safeties to injuries in the opening half. The junior completed 21 of 31 passes for 231 yards and accounted for three touchdowns — one passing, one rushing and one receiving.

Despite being down big, Barr never lost confidence in a game that featured 282 ground yards by the Buckeyes.

"We couldn't put our heads down," he said. "If one guy made a mistake we just had to help them keep their head up. ... It's great (being in the semifinals). I can't even explain it. Our team has come a long way."

Barr helped the Buckeyes take their first lead of the night with 3:28 left in the third quarter, thanks to being on the receiving end of a receiver's pass TD from senior Trey Washington that made the score 35-31. Another off-balance play extended the advantage to 41-31 early in the fourth, thanks to junior receiver DeVondrick Dixon taking an end-around 64 yards to the house.

Gilmer's victory came on another solid night for Henderson seniors Patrick Brown and Diamante Wright, who played their high school game after the Lions won a state title in 2010 and reached the quarterfinals last season. Brown carried the ball 22 times for 134 yards, plus passed for a pair of touchdowns. Wright added 20 carries for 106 yards.

On the Lions' last drive, Brown was on the receiving end of chains-moving pass on fourth down that was pushed out of his grasp by a Buckeyes defensive back. The play capped a second half in which the Lions were held out of the end zone after posting 31 points in the first 24 minutes.

"In games like this, someone is going to lose," said Henderson coach Dickey Meeks, referring to the physicality of both teams and the high levels at which the players perform.

Gilmer closed the opening half with a fury, scoring 14 unanswered points during the final 2:34 to go into the break down 31-28 after falling behind by 17 points earlier in the quarter. The Buckeyes received a gift on their second-to-last possession, when the Lions opted to try and onside kick and failed on the attempt to give Gilmer a short field.

The Buckeyes made the Lions pay for the decision, moving the ball 51 yards in only three plays and scoring on a 10-yard run by Barr with 2:34 left in the half. After failing an onside kick itself but stopping Henderson on downs, Gilmer got the ball back with 1:29 left while hoping to head into the break with the momentum.

Barr, a junior in his first season behind center at the varsity level, recorded five completions on the drive, including a 32 yarder to senior Trey Washington and a 24 yarder on fourth down to senior Slade Morris that resulted in a touchdown with only six seconds left before halftime.

Brown finished the half with 13 carries for 90 yards, but provided his scoring production through the air despite entering the night with only one passing touchdown on the season. He passed for two scores in the half, the first of which was placed perfectly into the hands of junior Tre' Hollins for a 59-yard TD as Gilmer defensive back DeVondrick Dixon stretched out to deny the pass only to come up inches short.

Brown's second passing TD was for 11 yards early in the second quarter to senior J'Korrie Centers, who also returned a lateral-pass fumble 38 yards to give the Lions a 21-7 advantage with 4:41 left in the first quarter.

Henderson's final score of the night, a 40-yard Williams Mann field goal, pushed the advantage to 31-14 with 2:56 remaining in the second quarter. The Lions then attempted the onside kick and failed, and the Buckeyes pulled right back into the game.