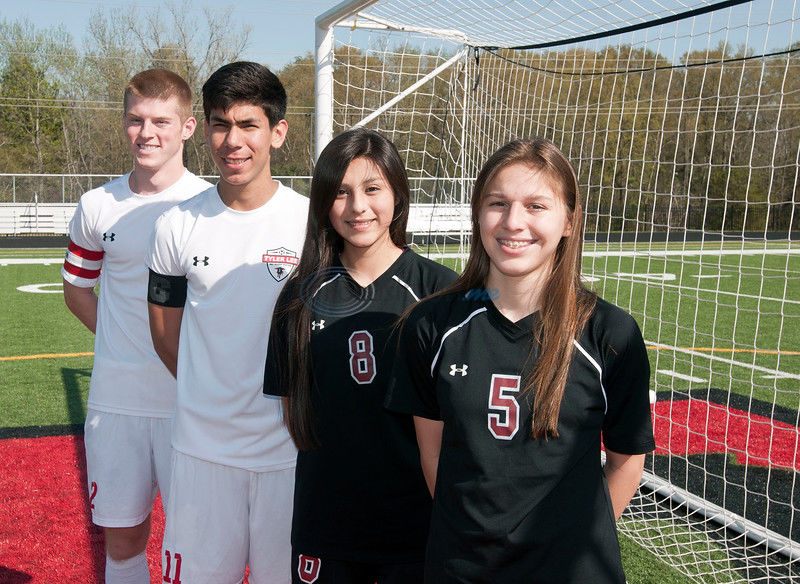 Robert E. Lee Soccer Captains (From Left) Will Arnold, Eric Munoz, Marlen Esparza and Adrianna Perez lead the Red Raiders and Lady Raiders into the postseason Friday with a double header at Ennis' Lion Memorial Stadium. It is the first time both the boys and girls have made the postseason together since 2012. 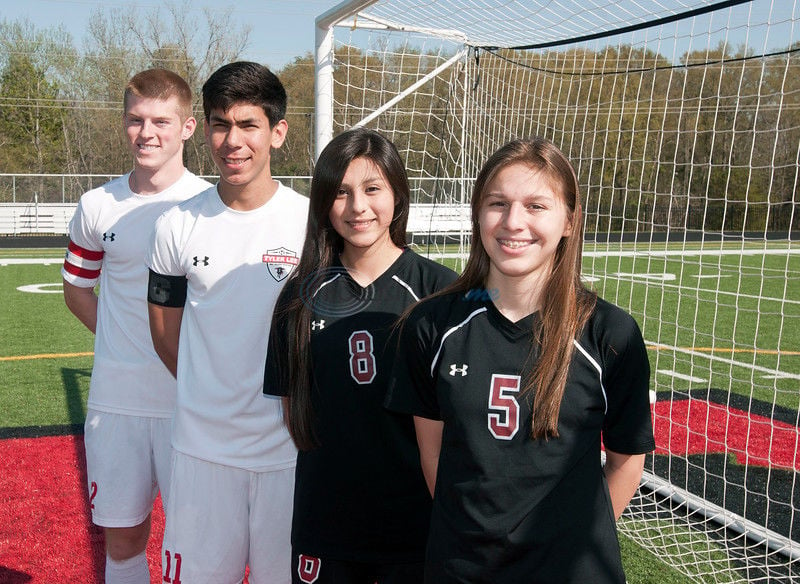 Robert E. Lee Soccer Captains (From Left) Will Arnold, Eric Munoz, Marlen Esparza and Adrianna Perez lead the Red Raiders and Lady Raiders into the postseason Friday with a double header at Ennis' Lion Memorial Stadium. It is the first time both the boys and girls have made the postseason together since 2012.

The Lady Raiders hadn't been in a postseason game in three years, which for a program that went nearly a decade with only a handful of district losses, is saying something.

The Red Raiders have been regular participants in the postseason and reached the regional semifinals under head coach Marty Germany in 2012, but had yet to win a district championship since 2009.

Both teams ended those droughts. The REL girls battled back from a difficult start to grab the fourth and final playoff spot in District 11-6A while the Red Raiders rose to the top of the league standings and stayed there to bring back the league title.

It's only fitting that both teams begin postseason play together. The Lee girls and boys will feature in a Class 6A bi-district doubleheader, beginning at 6 p.m. Friday at Ennis' Lion Memorial Stadium. The Lady Raiders (13-7-1) will attempt to knock off Waco Midway (19-2) first with the Red Raiders (17-3-2) to follow at 8 p.m. as they attempt to stay on a roll vs. Killeen Ellison.

Robert E. Lee has found district wins hard to come by for two years, so when REL started its 11-6A campaign with a 5-2 loss to Garland Sachse and 5-3 loss to Lakeview Centennial sandwiched around a 2-2 tie and penalty shootout success against Rowlett, things were looking bleak.

So, one point from three matches and the Lady Raiders were near the bottom of the standings.

"At the beginning of the year we did have some troubles," Lee junior captain Marlen Esparza said of the Lady Raiders first couple games. "But we got rid of all the negativity really early in the year and we just all played together as a family when we were on the field and connected with each other."

It began with a 2-0 road win over Garland on goals from Hailey Hurst and Alex Bice. The clean sheet was the first of four consecutive shutout victories, one of them by penalties over Rockwall, which quickly vaulted the Lady Raiders up the standings.

Their only two losses the rest of the way came against first-place Sachse (1-0) and second-place Rockwall (4-0). The Rockwall loss occurred in REL's final home game and the Lady Raiders wasted no time making amends by demolishing Garland Naaman Forest 8-1 in their regular-season finale as kind of a tune-up for the playoffs.

REL now turns its attention to Waco Midway. Senior captain Adrianna Perez said the team understands how tough this game will be, but are more than ready to knock off the Lady Panthers.

"It's going to take a lot of hard work and dedication, but I am pretty sure that we can do it," Perez said. "It's really great to get REL back into the playoffs, especially with it being my senior year. I am just really looking forward to it."

Lee sophomore forward Alex Bice leads the team with 17 goals while senior Hailey Hurst has seven goals and freshman Kourtney Hitchcock is coming off a hat trick to give her eight goals for the season.

The Lady Raiders have scored 50 goals this season while allowing 26. REL faces a Midway team that has hit the back of the net 91 times this season. The two teams met in a scrimmage before the season began with Midway winning 4-0, but Esparza is quick to point out, "we're a completely different team now."

The winner of the game will face the winner of Irving MacArthur and Richardson Lake Highlands next week in the area round.

What defines a winning streak?

That is what REL enters the postseason with. Lee lost its first district game on the road to Garland Sachse and hasn't been on the wrong side of the scoreboard since.

"It's been pretty good," Lee senior captain Eric Munoz said of the Red Raiders' string of success. "To start off the season we wanted to be district champs. We knew we were coming into a tough new district, but that was our mindset and that's what we did."

The unbeaten run began with a bit of a heartbreaking result to Rowlett. The Red Raiders led Rowlett until late in the match when an equalizer meant the game ended in a tie in regulation, with penalty kicks to determine the overall winner.

Well, penalties kicks are senior goalkeeper Daniel Abarca's specialty. Abarca beat Rowlett a year ago in PKs in the playoffs and did the same to secure success for REL. The Raiders keeper is 5-0 in his varsity career in penalty shootouts.

After breaking through against Rowlett, REL began to put together win after win, always with the same 2-0 score. The Red Raiders faced off against previously unbeaten North Garland near the end of the first half of district and handed them a penalty shootout loss. Lee later overcame being a goal down and a man down to beat North Garland in regulation.

The Red Raiders never looked back after that and now enter the postseason with plans on staying a while.

"When you win as many games as we have, people kind of put you on a pedestal and they are expecting a lot of you when you get to the playoffs," senior captain Will Arnold said. "Right now we are just trying to take care of our business. We just want to stay focused off the field and on the field."

Lee coach Marty Germans said he believes what has made his team so tough to face its multiplicity. The Red Raiders sport multiple players with five goals or more. Leading the team are Alex Ruben and Collin Berry, who each have found the back of the net nine times.

Twice this season REL has been forced to win games a man down and REL was able to win its final two district games without Munoz, who had to sit because of an accumulation of yellow cards.

Lee has at least reached the area round of the playoffs in eight of the past 10 years.

"It's not tough to look ahead, but right now we have the mindset of only Killeen Ellison," Munoz said. "We are going to take it game by game and hope the road ends (with a state championship)."

Added Arnold: "Any supporters who want to make the drive to Ennis (Friday) and watch us do what we do will be greatly appreciated."

The winner of Lee and Ellison faces the winner of Irving Nimitz and North Mesquite next week in the area round.