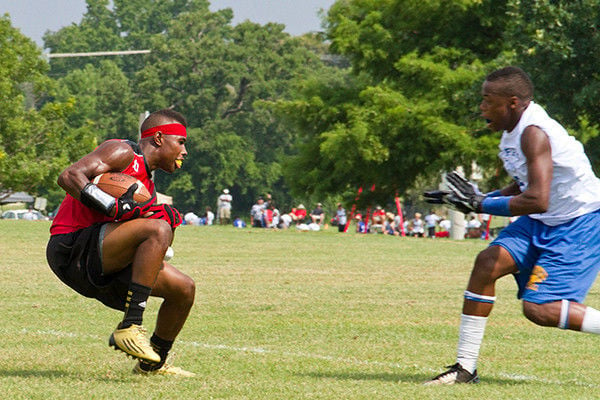 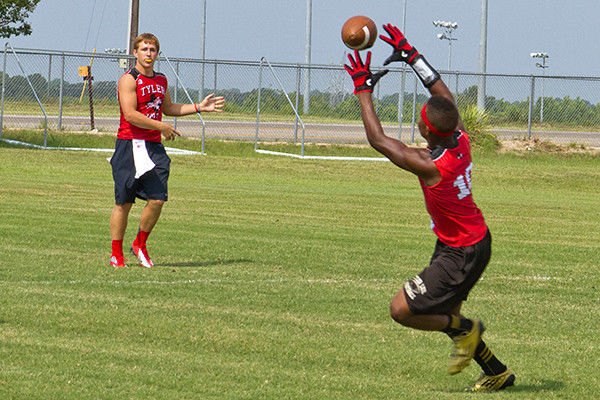 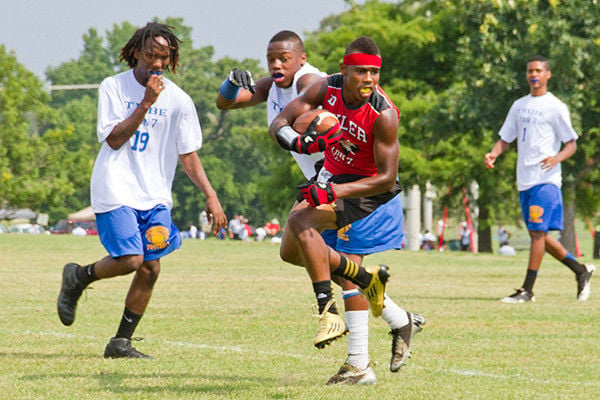 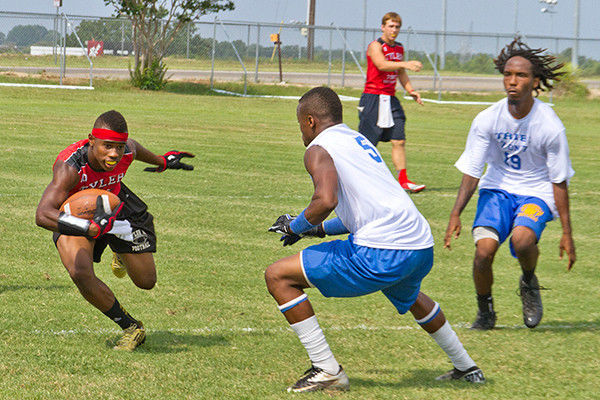 Robert E. Lee has made 14 consecutive trips to College Station for the Fox Sports Southwest 7-on-7 State Tournament.

Marquiston Williams made sure the Red Raiders would be back at state a 15th time.

The incoming senior hauled in a 20-yard touchdown pass from incoming junior quarterback Trevor Carr to give Lee a 27-20 win over Lindale in the semifinals of the Tyler 7-on-7 State Qualifying Tournament Saturday at Lindsey Park.

“At the beginning of the year coach (Randy) Womble always tells us that (Lee) have (never) not (qualified) in like 30 years or something, so it’s a big (deal),” Williams said.

Actually, Williams is half right. The 7-on-7 state tournament has been around for 16 years and Lee began playing 7-on-7 football 15 years ago. The Red Raiders won the 7-on-7 state championship in 2004.

Regardless, the Red Raiders will compete in the 2013 Fox Sports Southwest State Tournament July 12-13, which has a new home at Williamson County Park in Round Rock.

The requirement to qualify for state is to reach a final in a state qualifying tournament, so REL accomplished that with its victory over Lindale. In the other semifinal, Longview held off a late rally from John Tyler to win 26-13.

The two finalists decided not to play the championship.

JT coach Reginald Coleman said the Lions did not put their best foot forward and will look to qualify next week in Rowlett.

“We shut it down, we shut it down in the second half,” Coleman said. “For whatever reason, our guys did not play John Tyler football like we did (in pool play). It wasn’t because it was hot; we just didn’t execute. You have to do the little things and that is something we didn’t do.”

The Red Raiders were denied by Lufkin a week ago in the semifinals, but took care of business on Saturday. Lee went 2-1 in Pool D, falling to Lufkin again, 33-20, but since the Panthers had already qualified for state, they were ineligible for the semifinals.

That left Lee as the second-place team. Lindale successfully navigated Pool C, defeating Pine Tree (40-34) and earning a forfeit win over Alto. Like Lee, Lindale finished second in its pool, but advanced to the semifinals because Pool winner Whitehouse was ineligible having already qualified.

Neither quarterback got off to the start they wanted with both Carr and Lindale’s David Slice intercepted on their first possession.

The Eagles rebounded on their next drive with Slice hooking up with Garrett St. Louis on a 5-yard touchdown for a 6-0 lead.

Lee then took the lead with Carr connecting for a 25-yard touchdown to Diondre Allen. The extra-point pass to Williams made it 7-6. The Red Raiders continued their surge with Carr and Allen going to work for another TD strike to make it 13-6.

With just seconds to play and once more chance in the first half, Carr rolled out and fired a strike to Williams in the corner of the end zone. Williams also caught the PAT to give Lee a 20-6 lead at halftime.

Lindale’s defense turned up the pressure in the second half, with Kolton Pierce intercepting Carr. The Eagles then cut the lead on a 40-yard scoring strike from Slice to Deandre Williams. The PAT made it 20-13.

The Red Raiders went three-and-out again, with Lindale driving back down the field to tie it up. Slice found Pierce for the TD and PAT to make it 20-20 with two minutes remaining.

Lee’s Williams gave the final reply, latching on to a deep TD pass from Carr and catching the PAT.

“We had just changed the play; I was supposed to go outside, but I kept it up because the safety bailed out and (Carr found me),” Williams said. “We had some mess ups, it wasn’t all good, but we came back at the end.”

Longview incoming junior quarterback Dezmond Chumley got the Lobos on the board with a touchdown to 6-4 receiver Dorian Leonard for a 6-0 lead.

The Lions responded with Geovari McCollister hitting Dyran McDuff on a quick pass to the outside and McDuff did the rest en route to a 35-yard catch-and-run touchdown. The extra point gave JT a 7-6 lead.

The Lobos took back the lead with Chumley hooking up with Longview’s other 6-4 target, incoming senior tight end Jordan Whitaker. The PAT pass gave the Lobos at 13-7 lead at halftime.

Longview made it 19-7 midway through the second half on another Chumley TD pass to Leonard. The Lobos looked to potentially put the game out reach minutes later, but John Tyler’s defense made a stand fourth-and-goal to get the Lions the ball back.

JT capitalized on its momentum with McCollister launching a deep TD pass to Andre Crawford. The PAT failed, leaving the JT deficit at 19-13.

Longview reestablished its two-score advantage with Chumley finding Chris Pellum for a TD to put the game away.

“This is a new bunch of kids; they are young but they’ve got the competitive drive in them,” Coleman said about JT’s mindset following the loss. “Going into Rowlett (next week), it’s going to be a pretty competitive pool and we just need to have a good week of practice this week and hopefully have it carry over to (next) Saturday.”

At the Division II State Qualifying Tournament in Gilmer, the host Buckeyes and White Oak Roughnecks booked trips to state on Saturday.

Lee declared winner after both teams agreed to not play.