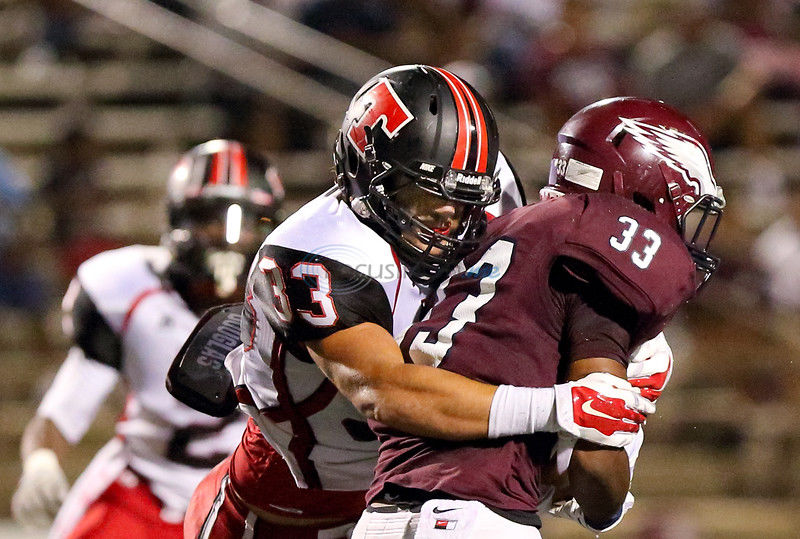 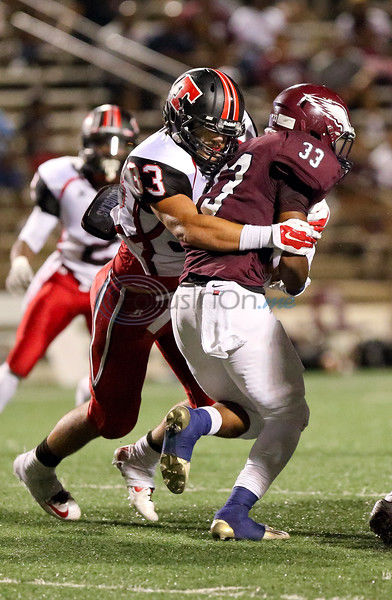 GARLAND — Robert E. Lee coach Darrell Piske calls them "belly flops" and said the players on defense were doing "a lot of them" during the last 10 days of practice.

"Every time a player did not break down on a tackle (in space), the whole defense was doing those belly flops," Piske said.

There is a reason for the extra attention to Lee's tackling woes.

It is costing the Red Raiders games.

In losses to Lufkin (43-19) in non-district and Rowlett (35-30) on Sept. 26, the Red Raiders surrendered big passing plays on quick hitters to a receiver that simply juked past a tackler against a spread-out REL defense and ran untouched either for a touchdown or inside the red zone.

Lee faces another team with a speedster on the outside today in Garland Lakeview Centennial's Nick McLaughlin, who already has 491 yards and five touchdowns on just 29 catches.

"Look at all of our ball games and look where people have scored on us. It has been on the perimeter in one-on-one situations," Lee defensive coordinator Jim Kerbow said. "We have really focused on breaking down at the point of attack. Becoming balanced because we've been getting off balanced and missing the tackles."

The Red Raiders gave up three such plays to Rowlett. Two of them went for touchdowns and the third put the Eagles in the red zone for an eventual touchdown.

Lee senior linebacker Brandon Durman said the defense has been working nonstop on how to fix the problem.

"Coach Kerbow has been on us (for tackling) since the minute we got off Rowlett about tackling," Durman said. "I think we need to realize if you are one-on-one, part of our problem is we fly past trying to make (a solo tackle). But breaking down and tackling them for a 2-yard gain is better than trying to make a big hit.

"We will then rally up and bring the (guy) down."

McLaughlin totaled 104 yards on nine catches in Lakeview Centennial's loss to Rowlett and finished with 91 yards on eight catches against league-leading Rockwall. Lakeview quarterback T.J. Edwards has passed for 1,130 yards and 11 touchdowns with two interceptions so far this season. Edwards is also a threat to run as evidenced by his 327 yards rushing and four touchdowns. Lakeview's lead back is Jamil Linwood, who enters with 60 carries for 437 yards and three scores.

"Really, they remind us a lot of John Tyler on offense," Piske said. "They've got some guys who can go, and a big offensive line who can get after it up front."

The Red Raiders have similar offensive threats, led by junior quarterback Zach Hall who enters today's game with 1,017 yards passing and seven touchdowns and 583 yards rushing and seven scores. Isjuwan Barker leads at receiver with 21 catches for 371 yards and four touchdowns while Tavon Wesley is coming off a two-touchdown performance against Rowlett.

All of that is great, but Piske wants more of those yards and points to come in the first half. In their last three games, Lee has been outscored 66-30 in the first half. REL was able to overcome halftime deficits in wins over JT and Garland Sachse, but lost against Rowlett.

It is an issue Piske said the team is looking to address.

"Our linemen want to be more physical in pregame to get their juices flowing a little bit, and really our offense is just playing like it doesn't have any confidence (to start games)," Piske said. "And then something good happens, and they realize ‘Oh, we can play to win' and then we get after it.

"We've got to win this one. We know how important it is. All we are thinking about right now is Lakeview. If we play a whole game, we have a chance to win, but if we just play a half, we are going to be in a battle."

Where: Homer B. Johnson Stadium, Garland

Quick Slant: This game is all about confidence for Lee. The Red Raiders felt like they were overconfident two weeks ago in their loss to Rowlett. Linebackers Teddy Matlock and Brandon Durman both echoed as much, saying REL needs to treat every opponent like it is a playoff game. Lakeview Centennial and Lee both are looking at this game as must-win. Centennial can ill-afford to go 0-3 in district while Lee wants to make sure that Rowlett's hiccup was just that and the Red Raiders return to the performance that got them a win in their opener over pre-district favorite Garland Sachse.

Quotable: "It's where we are right now as a program; we don't have that swagger. I would bet that the mid-2000s to 2009 or so, Lee guys played with a lot of swagger and expected to win football games. They still lost some games, but they went out (with confidence) that they were going to win. We just have to win enough games to get that swagger." — Lee coach Darrell Piske