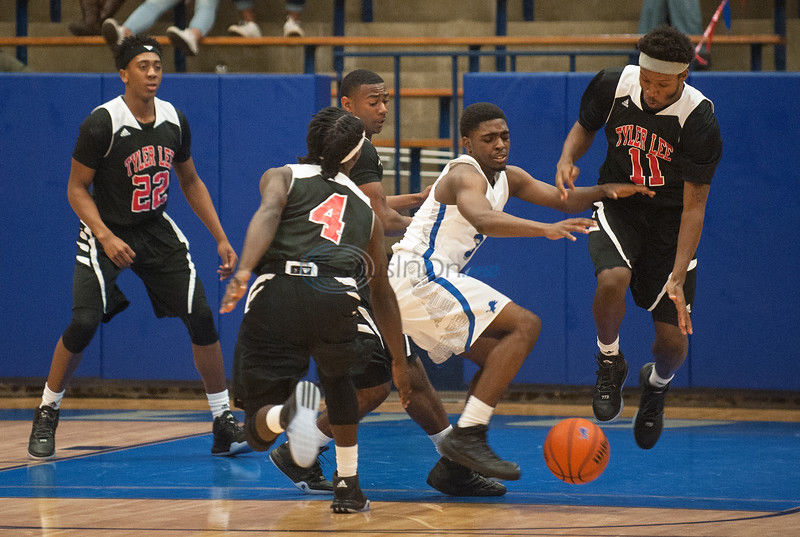 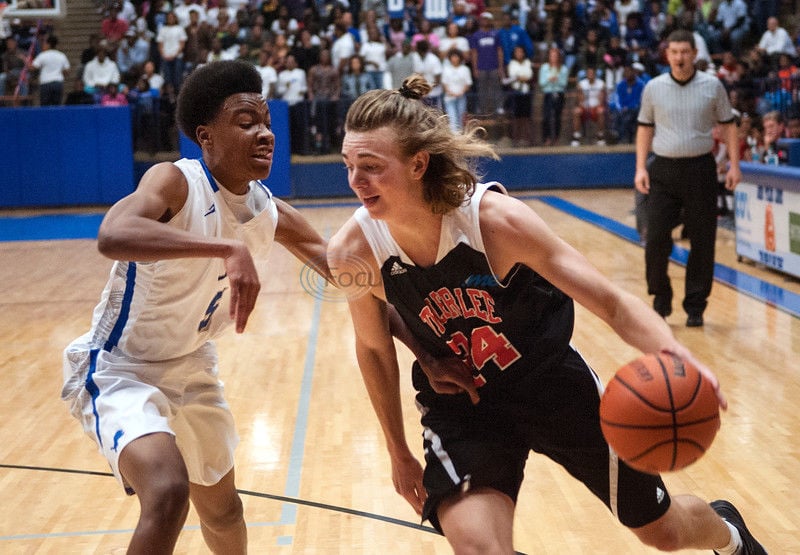 Robert E. Lee's (24) Patrick Pulliam dribbles the ball up toward the basket Tuesday during their game at John Tyler High School. (Sarah A. Miller/Tyler Morning Telegraph) 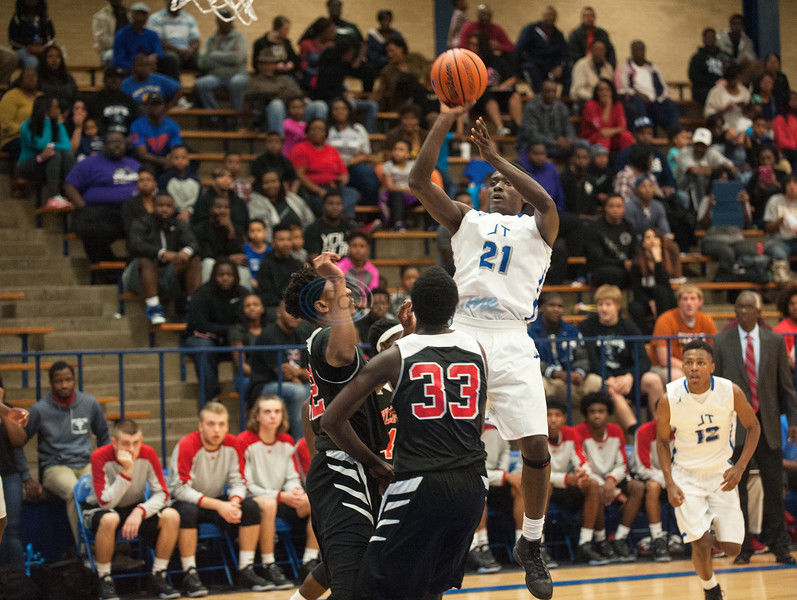 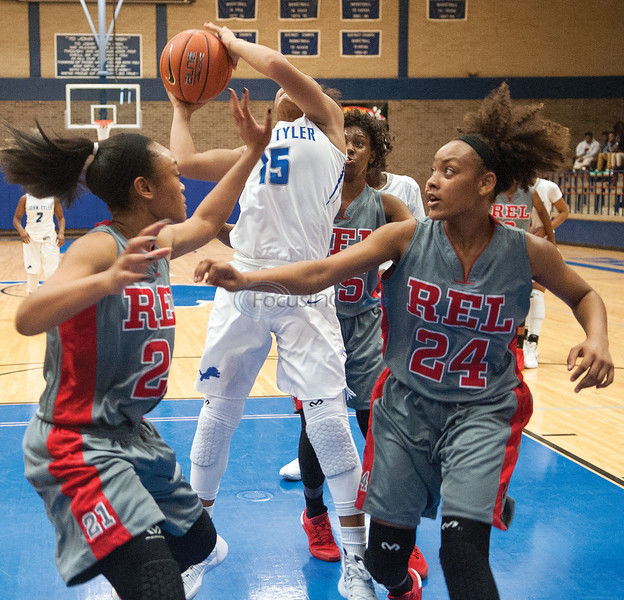 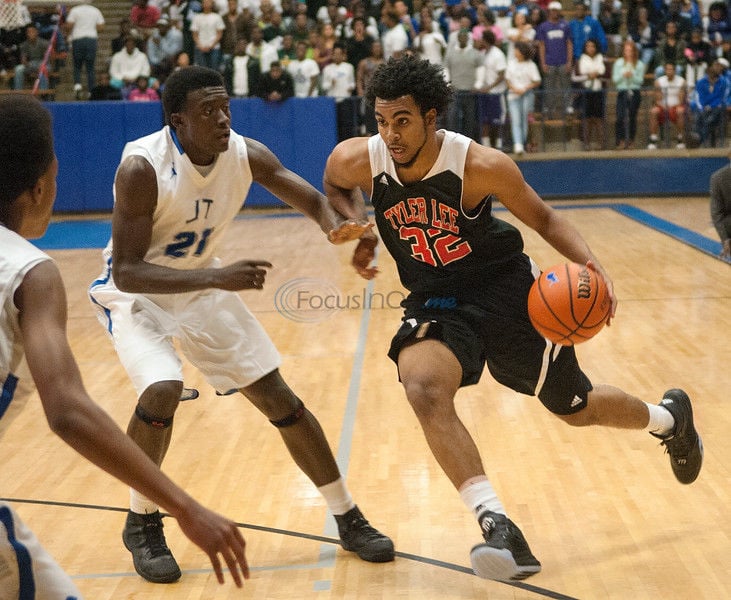 Robert E. Lee's (32) Zach Dunn dribbles the ball up toward the basket Tuesday during their game at John Tyler High School. (Sarah A. Miller/Tyler Morning Telegraph) 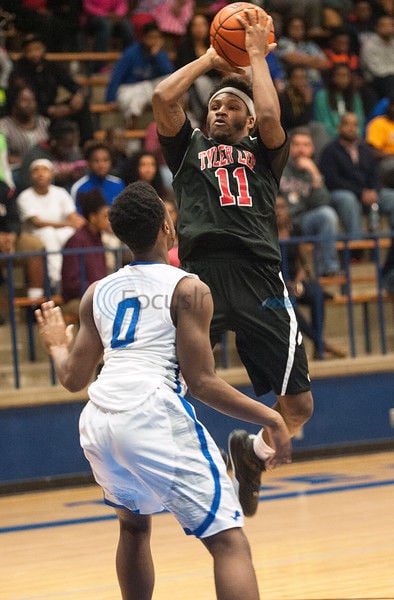 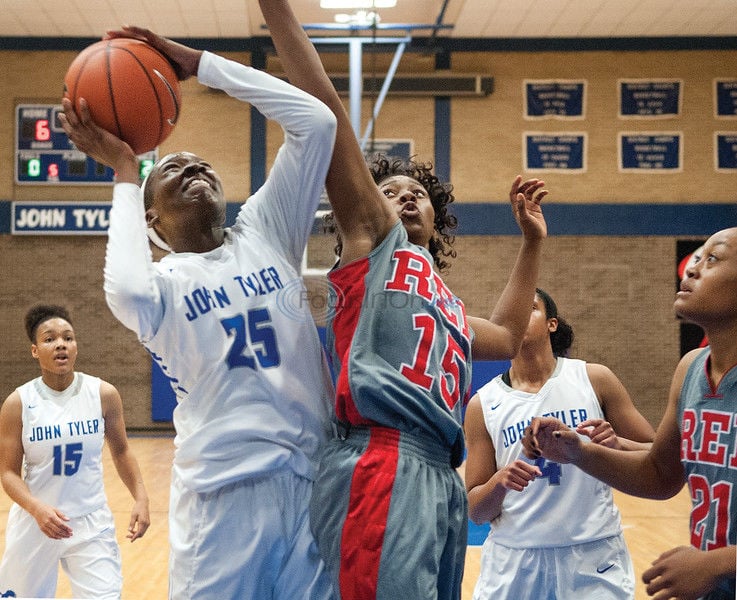 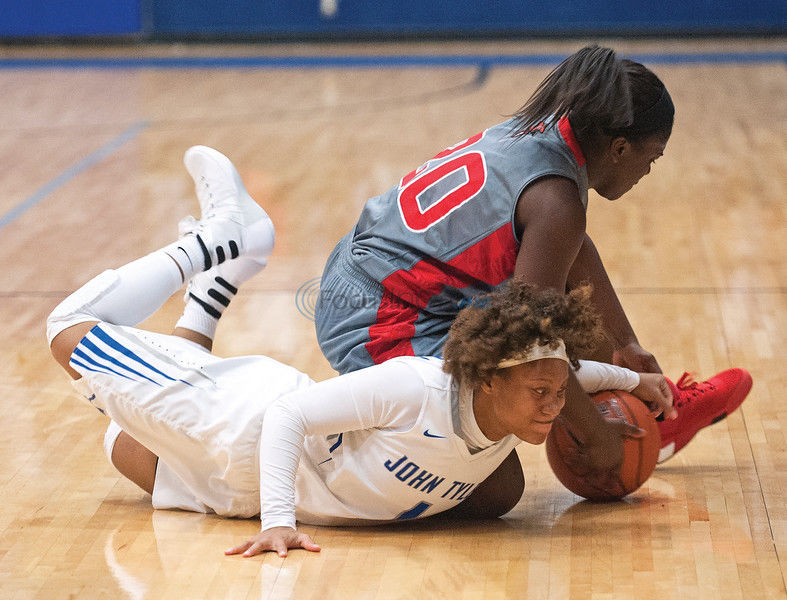 Robert E. Lee's (24) Patrick Pulliam dribbles the ball up toward the basket Tuesday during their game at John Tyler High School. (Sarah A. Miller/Tyler Morning Telegraph)

Robert E. Lee's (32) Zach Dunn dribbles the ball up toward the basket Tuesday during their game at John Tyler High School. (Sarah A. Miller/Tyler Morning Telegraph)

None came in overtime.

The Lions were perfect from the floor and the line in the extra period as JT outlasted cross-town rival Robert E. Lee 59-53 in another classic overtime battle between rivals on Tuesday evening at the Lions Den.

The victory completed a blue sweep for the home team after the eighth-ranked Lady Lions used a big first half to defeat the Lady Raiders 66-42.

All four teams are off until school resumes, with the Lady Raiders playing Monday and the other three squads playing on Tuesday.

In what could be the final non-district clash between the rivals with John Tyler returning to the state's highest classification in February's UIL realignment, John Tyler came up with the biggest plays in overtime to secure bragging rights for another year.

"It's something you remember for a lifetime," JT senior Jacob Owens-Bush said. "We'll be bragging about that forever."

The Lions won their second straight in overtime after defeating Nacogdoches Central Heights 89-87 on Friday.

On Tuesday, Isjuwan Barker, who scored a game-high 18 for Lee, gave the Red Raiders a 51-49 lead early in the overtime period. However Lee didn't score again until Zach Dunn scored with 9 seconds left to make it 59-53.

In between, Owens-Bush and Tavial Teal drilled jumpers and Patrick Williams dished to Mashaud Moore for a 55-51 lead. After milking 50 seconds of clock, Williams was sent to the line with 20 seconds left and drained two free throws for a 57-51 lead that sealed the victory.

"They're fighters," JT coach Cedeno Clark said. "Hopefully we just continue to get better. There's a lot of room for growth.

"I like this group; I like this team. They're showing me they don't give in regardless what situation they're in."

Barker added a game-high seven steals to his points total as Lee had 18 steals while forcing 24 turnovers, but just one turnover came in overtime. Dephen Walker supplied a double-double for Lee with 14 points and a game-high 11 boards.

Walker (with 5:40 left in the fourth) and Barker (20 seconds left in OT) were among three Red Raiders to foul out as Lee committed 27 fouls and sent JT to the line for 31 free throws, 20 of which were made.

"They had some key guys that fouled out of the game, which was good for us," Clark said. "I'm just glad we came out victorious."

The game featured 16 lead changes and five ties. Neither team built more than a seven-point lead, which came when JT led 7-0 after 85 seconds, though Lee erased it with a 9-1 run before the end of the quarter.

The Red Raiders forced overtime when Dunn drained a jumper with 15 seconds to go. After a dribbling violation on JT, Lee had one final shot to win in regulation, but Barker's 3-point attempt clanged off the rim and backboard.

Despite playing their closest game of the season yet on Monday, the Lady Lions showed no signs of fatigue on Tuesday, at least in the first half.

John Tyler opened a 41-21 lead by halftime and cruised in the second half to the 24-point victory in Lee coach Jacquetta Brown's first Rose City rivalry game.

"It always feels good (to win), but especially in a big game like this," Lady Lions coach Mike Smith said. "Robert E. Lee's got a great new coach; she's doing a great job, I think a lot of her. The kids played hard; both groups played hard."

The Lady Lions piled on the pressure with 20 steals to force 32 turnovers while committing eight of their own. JT didn't turn the ball over until 1:30 remaining in the first half, by which point Lee had committed 16 turnovers.

That discrepancy allowed the Lady Lions to attempt 63 shots compared to 32 for the Lady Raiders.

Daz Johnson led the way for JT with 17 points and nine rebounds, doing most of her damage in the first half (16 and seven) while going up against Lee post Erin Brinkley.

"Playing against Erin and knowing that Erin's good, Daz was mentally and physically ready for the game," Smith said. "Just came out tremendous on fire and did some really good things for us and kind of set the tone for the rest of the game for us. What she did was remarkable especially with Erin being as good of a player as she is."

Brinkley paced Lee with 13 points and nine rebounds. Miya Pettigrew and Ja'Kayla Bowie both added 11 for the Lady Raiders, who shot 53 percent for the game, better than the 40 percent shot by JT.