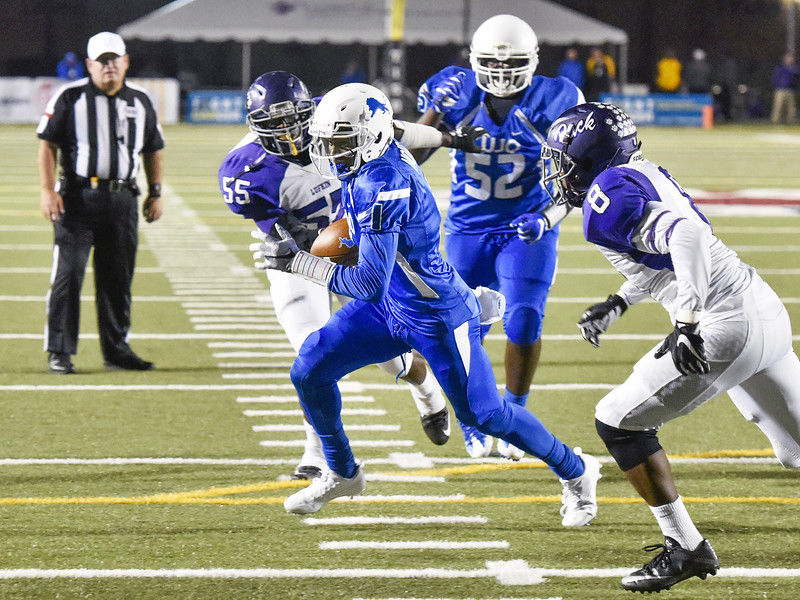 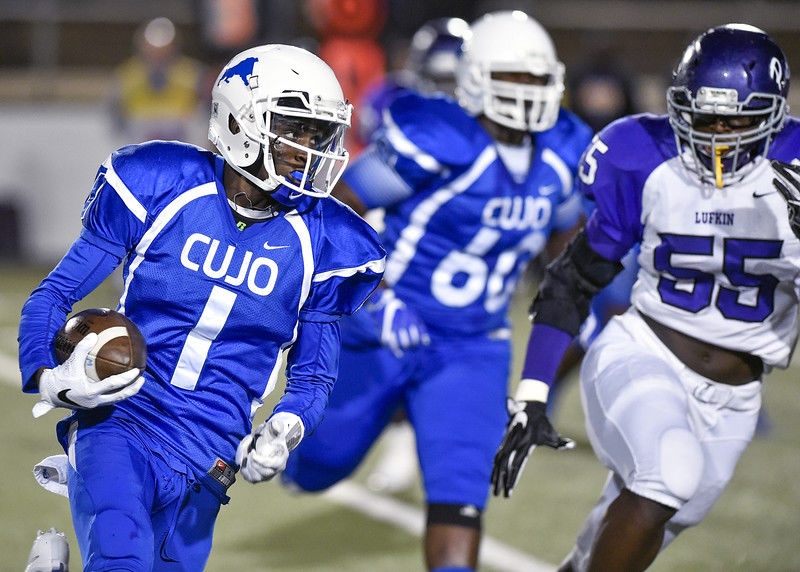 John Tyler quarterback Bryson Smith (1) runs around the right side on a keeper during the first quarter of the Division 2 Class 6A Bi-District playoff game against Lufkin on Friday at Christus Trinity Mother Frances Rose Stadium in Tyler. Andrew D. Brosig/Tyler Morning Telegraph 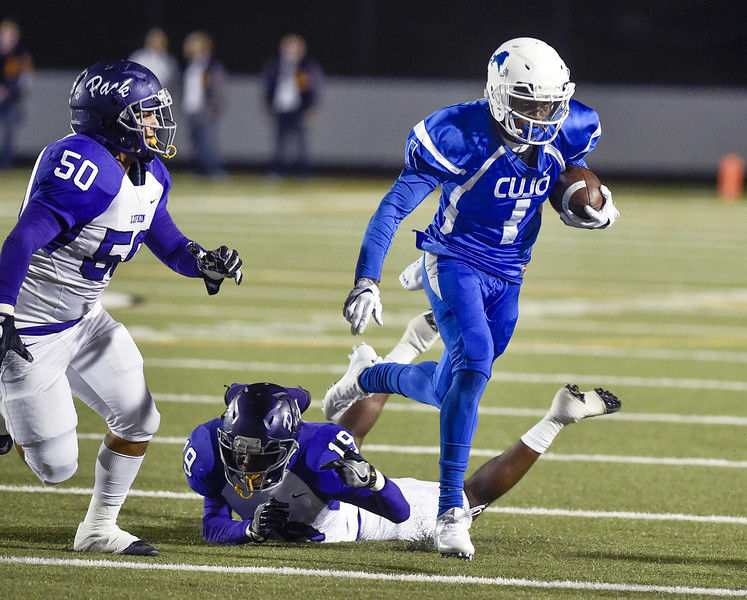 Lion quarterback Bryson Smith, right, slips a Lufkin tackle as he runs toward the sideline on a keeper during the first quarter of the Division 2 Class 6A Bi-District playoff game Friday at Christus Trinity Mother Frances Rose Stadium in Tyler. Andrew D. Brosig/Tyler Morning Telegraph 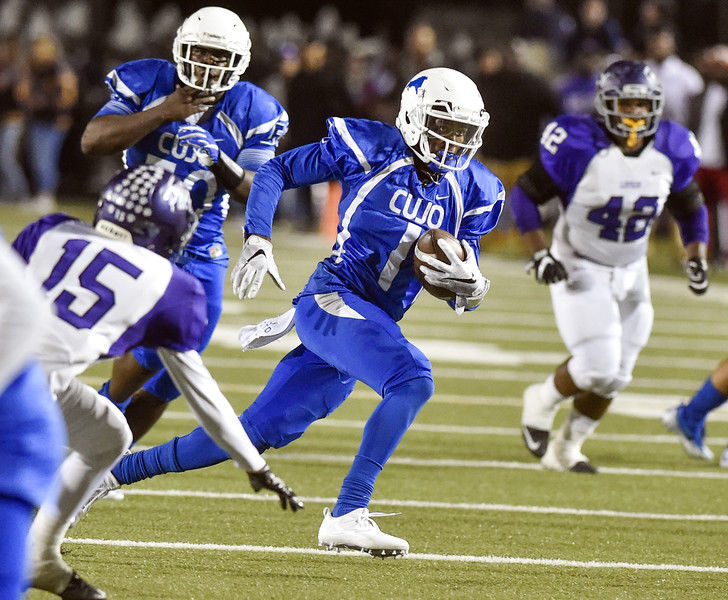 John Tyler quarterback Bryson Smith (1) runs around the right side on a keeper during the first quarter of the Division 2 Class 6A Bi-District playoff game against Lufkin on Friday at Christus Trinity Mother Frances Rose Stadium in Tyler. Andrew D. Brosig/Tyler Morning Telegraph

Lion quarterback Bryson Smith, right, slips a Lufkin tackle as he runs toward the sideline on a keeper during the first quarter of the Division 2 Class 6A Bi-District playoff game Friday at Christus Trinity Mother Frances Rose Stadium in Tyler. Andrew D. Brosig/Tyler Morning Telegraph

Year after year John Tyler has produced precocious phenoms on the gridiron.

The latest just wrote his name down in the record books.

After running for 191 yards in a 50-49 bi-district playoff win over Lufkin, senior quarterback Bryson Smith set the school's career rushing record, breaking a tie between Kendall Hunter and Jeremy Johnson.

"I just owe it all to my teammates," Smith said Friday of his performance, which included 380 yards passing. "Without them I'm nothing so all credit to them and I just do what I do when I'm supposed to."

Hunter, who went on to star at Oklahoma State and in the NFL with the San Francisco 49ers, was a running back from 2004-06 at John Tyler. Johnson played receiver then quarterback from 2007-09 at JT before setting school receiving records at SMU. Johnson is currently the Lions' quarterbacks coach.

Smith, a Houston commit, ran for 88 yards as a sophomore when he was a receiver and backup quarterback. He went for 1,441 yards as the starting quarterback last year and this season he's up to 1,431 and counting. He has 40 total touchdowns on the ground.

In Friday's wild victory over longtime rival Lufkin, Smith did it all.

He averaged 9.6 yards per rush, scoring three times, while completing 71 percent (25 for 35) of his passes and three more TDs. He even returned a kickoff 15 yards.

Smith helped John Tyler (10-1) advance to the area round of the Class 6A Division II playoffs to play Dallas Jesuit. The Rangers beat Garland Naaman Forest 32-6 on Friday and will meet the Lions at 2 p.m. Saturday from Mesquite Memorial Stadium.

John Tyler needed every bit of effort from Smith and the rest of the team to hold on against Lufkin (7-4) on Friday.

The Lions fell behind 14-6 after one quarter but appeared to take control with 16 straight points before the Panthers returned a kickoff 100 yards just before halftime.

John Tyler again looked to be taking over the game in the third quarter with a 43-28 lead heading to the fourth quarter thanks to a big interception from Martrevious Allison, his second of the year.

Allison's first pick came in Shreveport at the Independence Bowl during the Battle on the Border series where, coincidentally, Lufkin quarterback Kordell Rodgers' only other two interceptions all year came in the Panthers' 69-54 loss to Bossier City Parkway moments after JT beat New Orleans Warren Easton.

But Lufkin, as the Panthers always do (remember their comeback from down 42-3 to beat Robert E. Lee last year?), fought back and tied the game at 43-43.

After a Smith TD pass to Michael Givens-Washington, Javontavius Mosley helped the Lions maintain the lead with an interception on the crucial two-point conversion as Lufkin attempted to go for the win instead of force a possible overtime.

It was reminiscent of JT's only loss, 59-58 to Rockwall. The Lions led that game by 17 before the Yellowjackets rallied to tie it up only for JT to retake the lead until Rockwall won on a late two-point conversion.

But ultimately, Friday's game was decided in the hands the man who wears the coveted No. 1 jersey. Facing fourth-and-1 from the 40, Smith ran two yards and slid to a stop in bounds to allow the clock to keep running as it ticked below one minute.

"You gotta do that because you know it's going to put you in position to control the clock and to get this game over with so we can come out with a victory," JT coach Ricklan Holmes said of going for it. "When we're in an adverse situation on offense we know we can call on No. 1 and he can get us out of it."

That left one kneel-down for Smith to end the game and send John Tyler into the area playoffs for a third straight year where Dallas Jesuit awaits.

Quotable: "We're healthy, we've got another week of practice and I'm feeling good about what our team is doing now. I feel good about how they're progressively getting better." – JT coach Ricklan Holmes

Turning point: Down 50-43, Lufkin scored on QB Kordell Rodgers' third TD run with 1:21 to play. Panthers coach Todd Quick elected to go for two and the win, but Javontavius Mosley intercepted Rodgers' toss to the back of the end zone.

The game was over when: After JT's Devlen Woods recovered an onside kick with 81 seconds left with Lufkin in possession of all three of its timeouts, Bryson Smith picked up fourth-and-1 with 1:00 left to allow JT to run out the clock.

Warning signs: John Tyler's defense has allowed 497 and 463 yards in the last two games to raise its season average to 350.6 yards allowed per game. The 33 first downs and 12 of 20 third-down conversions were both season highs allowed by the Lions stop unit.

What this win means: The Lions are back in the area playoffs, which was their stopping point last year, a 77-51 loss to Mansfield Lake Ridge. That game was played in Forney, where two of JT's last three playoff losses were (2013 to Mansfield Legacy). The other was in the 2014 5A state semifinals to Aledo, played in Mesquite but at Hanby Stadium, not the sight of next week's game.

Fast forward: John Tyler (10-1) takes on Dallas Jesuit (8-3) in the Class 6A Division II area playoffs at 2 p.m. Saturday from Mesquite Memorial Stadium. The Lions visited Mesquite once in the regular season, a 49-28 win over Horn at Hanby. The Rangers went 7-0 to win District 9-6A while the Lions shared the 11-6A title with a 6-1 mark. On Friday Jesuit beat Garland Naaman Forest 32-6, the team's eighth straight win.