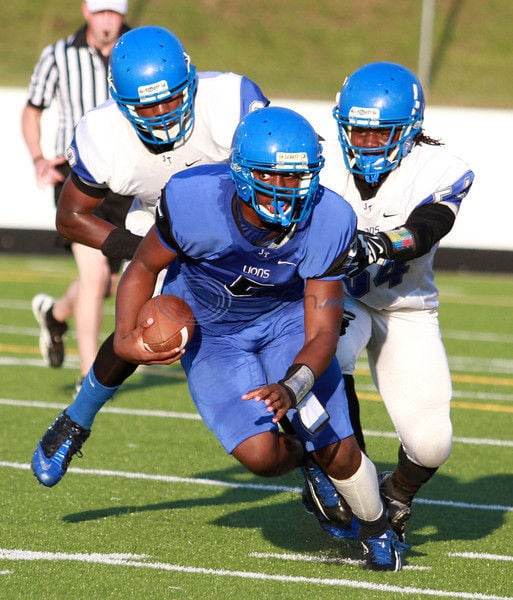 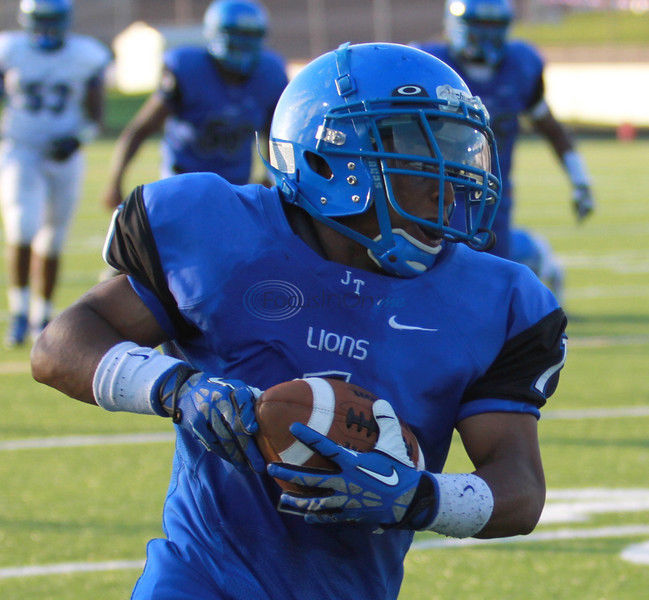 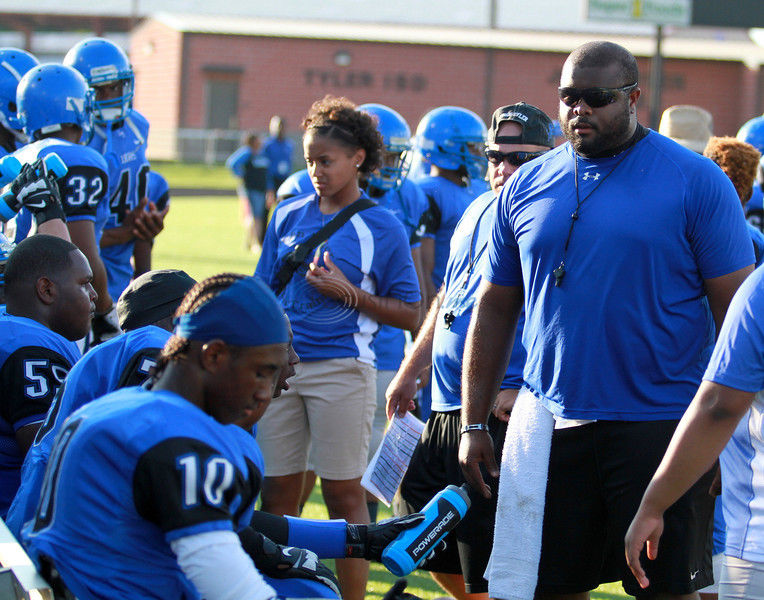 On back-to-back plays late in John Tyler's annual Blue and White Spring Game, Geovari McCollister raced into the end zone, only to have the play brought back.

McCollister, the Lions' colossal QB, would have easily rumbled in for touchdowns in a real game, but JT coach Ricklan Holmes' whistle was quick to ensure the senior-to-be stayed upright, with quarterbacks tagged instead of tackled.

"I kept telling him, just because you thought that you broke that doesn't mean I thought you did," JT coach Ricklan Holmes said. "At the end of the day I'm the one that's got to blow the whistle to make sure he's ready to go for 16 games and not just a scrimmage."

At the end of the day, McCollister stood tall, completing 9 of 15 passes for 96 yards and a touchdown as his Blue team defeated the White 24-13 Thursday at Trinity Mother Frances Rose Stadium.

The spring game capped John Tyler's spring practices; the Lions return to Rose Stadium for the 2014 season opener against Plano on Aug. 29.

In between then, JT will be hard at work hoping to build on a spring that Holmes said was all about improvement.

"This team has grown and they are learning how to practice and they're learning what it takes to compete for another district title and to travel to a state championship game," Holmes said. "We've got a lot of guys with a lot of talent but talent doesn't win football games. I tell them all the time, football players win football games."

The Lions looked to be regressing at the start of the spring game. McCollister was tagged for seven sacks in the controlled scrimmage portion, though he did break free for a 6-yard scoring scamper.

The JT offensive line struggled at times in 2013. Holmes said he'll have the linemen in the weight room every day to make sure the unit will allow skill players like McCollister, Jeremy Wilson, Rodney Bendy, Nick Cain and Duntayviun Gross to produce.

"We've got great skill guys, … they're going to make some plays, we all know that," Holmes said. "We know Geo's going to be able to get them the ball, but it all starts with that front line. How long can they protect him and how many holes can they open?

"Every day in the weight room they're going to be with me and we're going to be hitting it as hard as we did in the offseason. I'm going to really see how important this is to them; I'm going to see how much they really want to get some hardware on their finger. And that goes for the rest of the team."

In the game situation in which the Blue and White teams squared off in two 12-minute halves, McCollister and the first-team offense came to life.

The Lions signal caller found a wide-open Jeremy Wilson for a 35-yard strike for Blue's first score. Following McCollister's two ill-fated runs to the end zone in the second half, Wilson, who could and did shed tacklers, ran in from 5 yards out.

The White team's lone touchdown came on Bryston Gipson's 3-yard haul from Stone Johnson in the second half.

In the scrimmage portion, backup quarterback Bryson Smith threw a pair of touchdown passes, going 64 yards over the middle to Quaylan Brown and hitting Dejuan Beal on a short pass wide for a 3-yard score. Gipson showed his speed on a 64-yard touchdown run while Johnson scored on a 1-yard dive.

Defensively, Isaac Warren had an interception and Jaylon Watson recovered a fumble, both in the controlled scrimmage.

"Towards the end we started clicking," Holmes said of the defense. "That's what you want to see; you want to see that improvement every day leading up to a day like this."

For all the Lions, playing in a game-like atmosphere in front of their cheerleaders, band and a decent crowd was a nice change of pace, even if McCollister was robbed of a couple touchdowns.

"It's always nice to get out here at Rose Stadium when you practice every day at John Tyler," Holmes said. "Don't get me wrong, I love my turf out there, but it's always good to be out here and being able to compete a little bit."