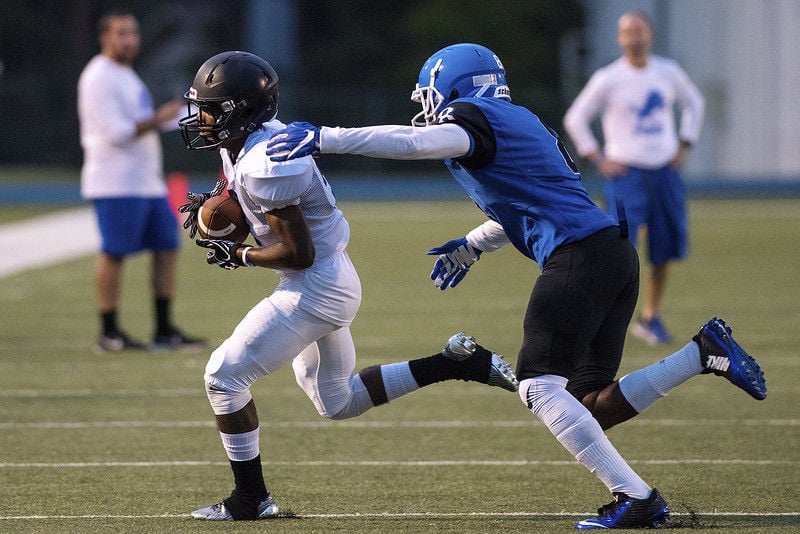 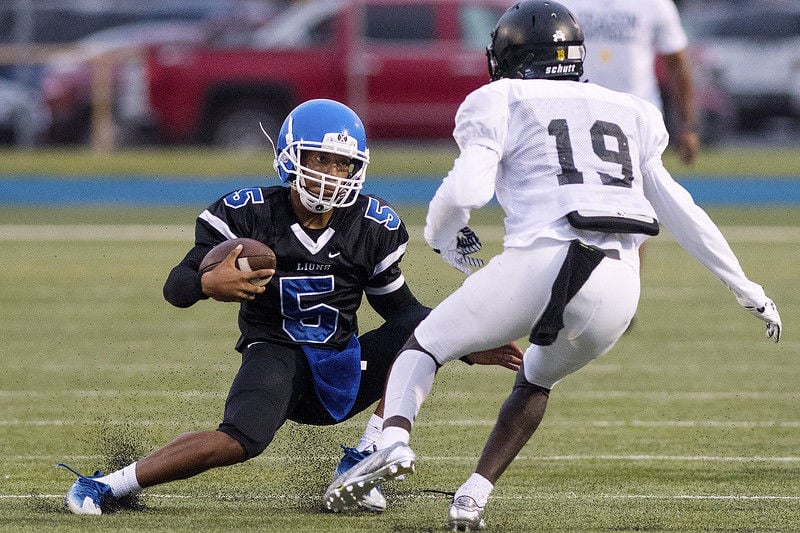 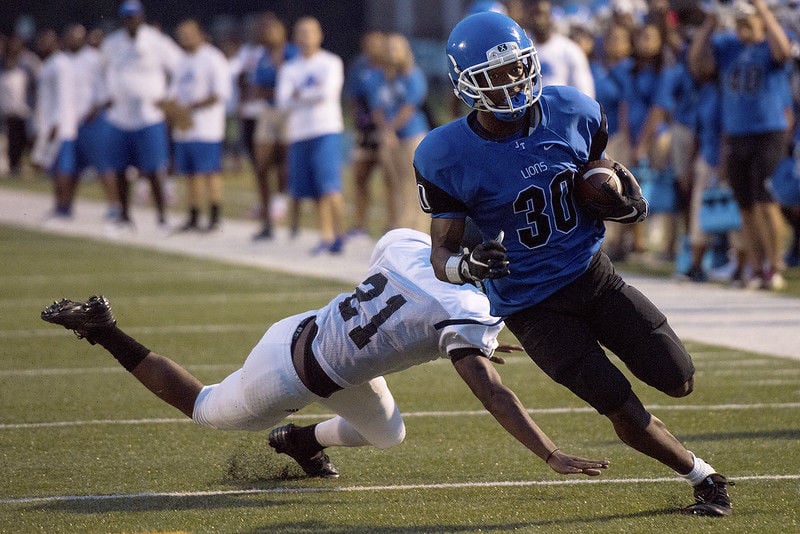 John Tyler running back Kitan Crawford (30) runs past a member of the Nacogdoches defense as he runs the ball into the end zone for a touchdown during a high school football scrimmage at John Tyler High School in Tyler, Texas, on Friday, Aug. 25, 2017. (Chelsea Purgahn/Tyler Morning Telegraph) 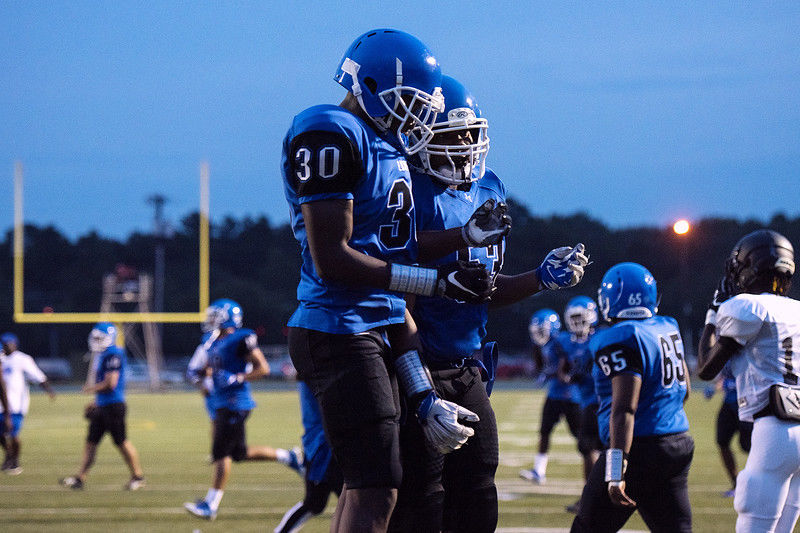 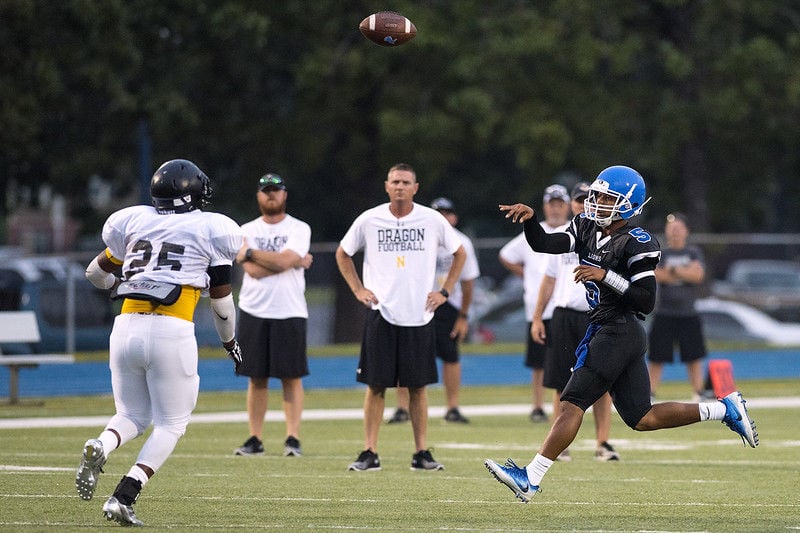 John Tyler running back Kitan Crawford (30) runs past a member of the Nacogdoches defense as he runs the ball into the end zone for a touchdown during a high school football scrimmage at John Tyler High School in Tyler, Texas, on Friday, Aug. 25, 2017. (Chelsea Purgahn/Tyler Morning Telegraph)

John Tyler quarterback Devlen "Cadillac" Woods tossed three touchdown passes and rushed for 107 yards as part of a dominating effort overall for the Lions in a 5-0 football scrimmage win over Nacogdoches Friday at John Tyler Field.

JT scored three touchdowns in the controlled portion of the scrimmage and added two more in the live quarters.

Woods connected on scoring strikes of 15, 22 and 16 yards on the final play of the night to fellow junior Cameron Grant. His 15-yard TD toss went to Jaivon Williams and the 22-yard hookup went to Ke'Andre Street. Woods finished 9 for 11 passing for 100 yards and those three scores with one interception.

Woods' best play of the night went for naught because of a false start penalty. The junior rolled out, and on the run, lofted a perfect pass in stride to Street for what would've been a 49-yard touchdown. Instead, Woods scrambled for 25 yards before later ending things on a high note with the TD strike to Grant.

"Cadillac brings a great aspect to the game with his knowledge of it, and the ability to make plays downfield and having his eyes available to find his receivers," JT coach Ricklan Homes said of his quarterback. "He has all the tools to do it."

The other offensive highlight was Roderick Hawkins going untouched up the middle for a 65-yard touchdown. It was all part of John Tyler totaling 378 yards on the ground and 473 overall.

Nacogdoches was limited to 94 yards rushing as the Lions blanked the Dragons.

JT's stop unit was determined to keep the visitors off the scoreboard, even preventing Nacogdoches from finding success during a session that featured five plays at the goal line.

On all five, JT repelled the Dragons away with a holding penalty preventing the visitors from finally tasting pay-dirt on their fifth and final snap from the 7.

"That is just a continuation of what we had last season. Our front seven is really strong as far as the run game goes," Holmes continued.

Dragons tailback Marcus Sweat paced his team in the loss with eight carries for 52 yards while Isiah Smith finished with 12 carries for 42 yards. Nacogdoches quarterbacks Jake Smith (6-18-0) and Bobby Phillips (5-10-0) combined for 116 yards.

The Lions now turn to Friday, Sept. 1 and the opener with Plano West at Clark Stadium in Plano. Nacogdoches will play Kilgore the same night at Kilgore's R.E. St. John Memorial Stadium.

"We are going to grade this film (Saturday) morning and make sure we are where we need to be depth wise, and there may be some shuffling around of the depth chart," Holmes said. "It's week by week now and starting Monday it's all about Plano West."