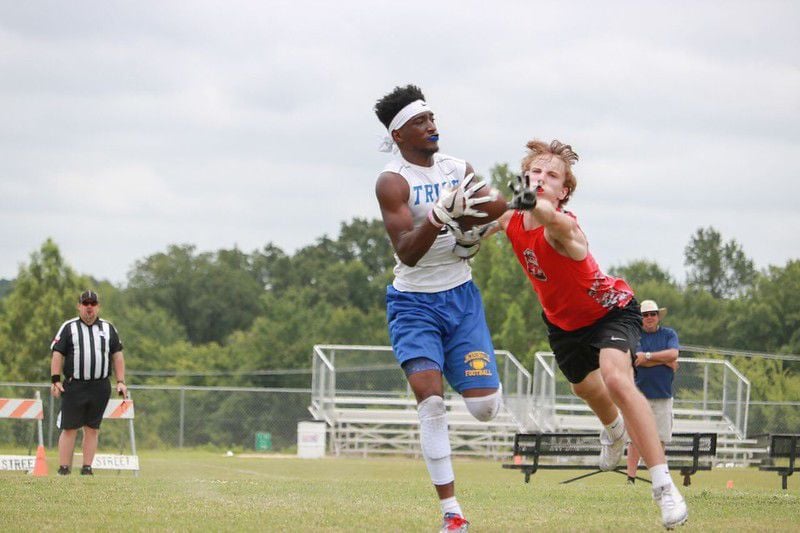 Jacksonville reciever Jaeshun Bush makes a great catch with defender on him during the Tyler 7on7 SQT Saturday at Lindsey Park. (Schuyler Wick/Freelance) 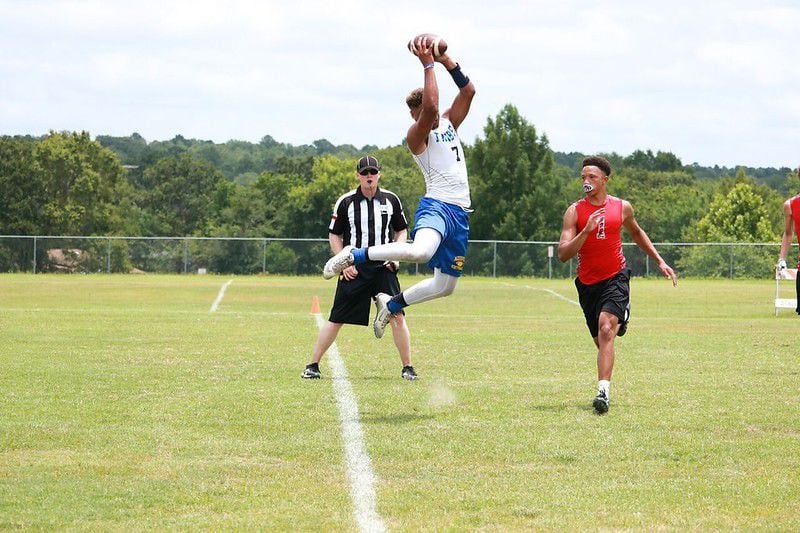 Jacksonville reciever Shiloh Canady makes a terrific catch in the end zone to convert the extra point in the Indians win over Greenville Saturday in the semifinals of the Tyler 7on7 SQT at Lindsey Park. (Schuyler Wick/Freelance) 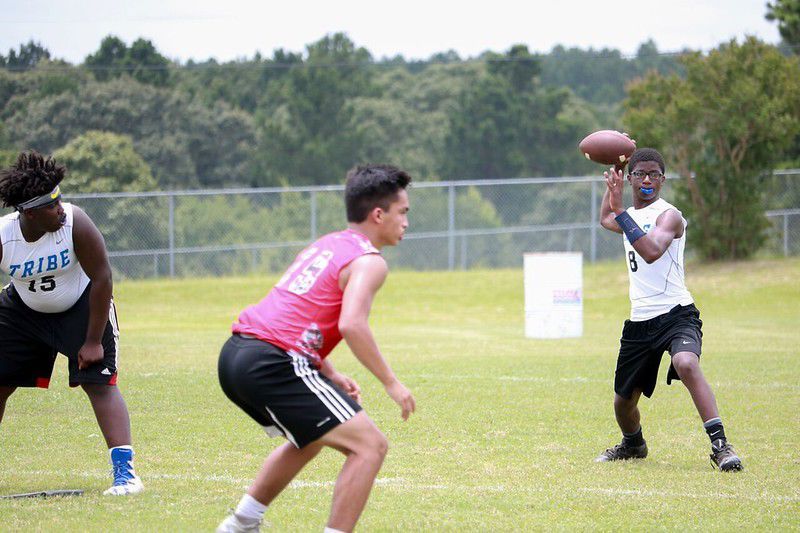 Jacksonville reciever Jaeshun Bush makes a great catch with defender on him during the Tyler 7on7 SQT Saturday at Lindsey Park. (Schuyler Wick/Freelance)

Jacksonville reciever Shiloh Canady makes a terrific catch in the end zone to convert the extra point in the Indians win over Greenville Saturday in the semifinals of the Tyler 7on7 SQT at Lindsey Park. (Schuyler Wick/Freelance)

Jacksonville could get used to this.

For the second-straight year the Indians traveled to Tyler hoping to garner one of two qualifying spots for the upcoming Adidas Texas 7on7 Championships.

And for the second year in a row, the Tribe are going to College Station. Jacksonville quarterback Dontrail Sessions tossed six touchdown passes, three of them to receiver Cade Candler, in a 41-25 win over Greenville on Saturday in their Tyler state qualifying tournament (SQT) semifinal at Lindsey Park.

"It's a good thing because I didn't get to go last year," said Sessions amid the postgame celebrations. "It is good for the team and good for the community."

Added Tribe receiver Luthey Fuller, "It's a good feeling and its playing (right into) the 2017-2018 football season."

While Jacksonville was punching its ticket to College Station in its semifinal, the Longview Lobos left no doubt as to their future plans in the other.

"We've been playing together all (summer) and we just started to connect," Johnson said of the win. "We can go nowhere but up from here. I feel like we are going to make progress and keep going up."

Longview is returning to state for the first time since 2013.

John Tyler and Robert E. Lee were hoping to use the Tyler SQT as their vehicle to reach the state tournament. JT qualified out of Tyler last year, but finished second in pool play to Marshall, falling 39-25 in their game, while REL went winless in its three pool games.

Whitehouse and Lufkin have already qualified for the state tournament with Lindale also dropping its three games in Pool C.

The Indians nearly did not make the semifinals as Jacksonville rallied from a 27-6 deficit to defeat Huntsville in its final pool play game.

In the semifinal, Jacksonville took the lead on its first possession and never looked back.

After a penalty on Greenville gave the Indians first-and-goal, Sessions fired a quick pass to JaeShun Bush with Scooter Baker catching the extra-point pass for a 7-0 lead.

Greenville reached the semifinals by advancing out of Pool A (Lee, Lufkin and Mount Pleasant). The Lions looked to answer, but on fourth-and-goal, quarterback Caleb Jarvis' fade pass to Nick Mapps was knocked away by Jacksonville defender Dallas Mobley. It was one of three pass breakups in the end zone Mobley made in the contest.

Before Greenville could regroup, Jacksonville scored on its first play as Sessions connected on a 40-yard touchdown pass to Candler. Bush made a one-handed catch for the two-point conversion for a 14-0 lead.

Jarvis and Mapps got Greenville on the board with a 4-yard scoring strike. The PAT pass failed to make it 14-6.

Sessions went deep again to answer, this time to Chris Carpenter, who outmuscled two defenders on third down to make it 20-6.

Greenville scored once more in the half to make it 20-12 at halftime.

Any chance the Lions had of making a comeback was dealt a blow in the opening minute of the second half. Jarvis tried a deep pass, but it was picked off by Jacksonville's Carpenter.

The Indians and Sessions immediately made the momentum-swing count with the Tribe QB connecting with Candler for a 39-yard gain and a 1-yard touchdown.

"Me and (Sessions) have been having a connection since eighth grade," Candler said.

Added Sessions: "We were running our man breakers because (Greenville) was staying in man (coverage). Our receivers made me look good today."

A three-and-out by Jacksonville and touchdown pass to Mapps pulled Greenville to within 27-25 with 10 minutes remaining in the game.

Sessions made sure the drama was short-lived, leading the Indians on consecutive scoring drives with the Indians defense forcing a three-and-out in between to seal the game.

Notes: The Adidas Texas 7-on-7 Division I championships are scheduled for June 30 to July1 at Veterans Park and Athletic Complex in College Station. … Whitehouse and Lufkin qualified for state by both finishing as finalists at the Lufkin SQT on June 10. After this week, only three more SQTs are left: Houston Sam Brown on June 18, and Lake Travis and Rowlett on June 23.

(* – Already qualified for state or is a B team, so ineligible to advance out of pool)