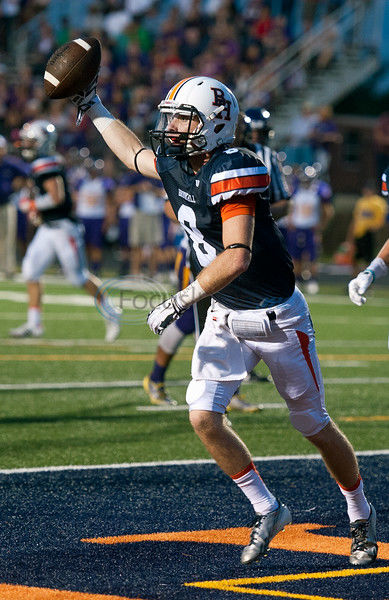 photo by Sarah A. Miller/Tyler Morning Telegraph The Brook Hill School's junior Seth Brasher (8) looks the the sidelines after making a touchdown during the varsity football game Friday night against Edgewood in Bullard, Texas. 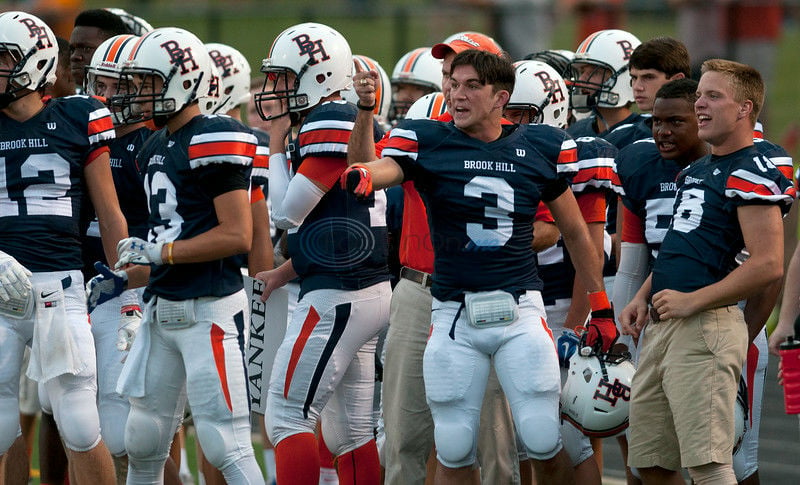 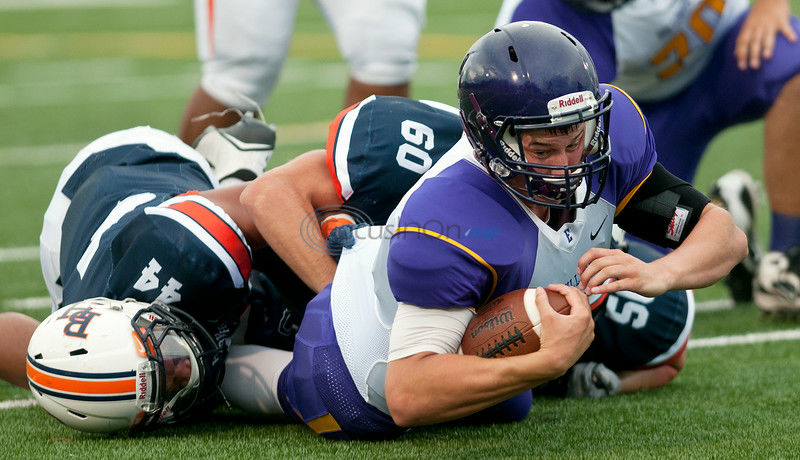 photo by Sarah A. Miller/Tyler Morning Telegraph The Brook Hill School's junior Seth Brasher (8) looks the the sidelines after making a touchdown during the varsity football game Friday night against Edgewood in Bullard, Texas.

BULLARD — Brook Hill and Edgewood combined for 1,036 yards of total offense in a high-octane showing on Friday night in the first game of the Brook Hill Football Classic at Herrington Stadium.

After a sluggish start, the Brook Hill Guard kicked it into gear on the last play of the first quarter and won a 49-42 shootout.

Edgewood had a chance for a win, taking the ball at its own 33-yard line with 2:31 left in the game. However, Alex Hale made his second interception of the game to seal the win for the Guard.

The Bulldogs got on the board quickly when quarterback Jackson Tyner found Kobe Huett for a 27-yard touchdown pass. Tyner then threw to Devin Davison for a two-point conversion for an 8-0 lead with 10:19 on the clock.

Brook Hill had a miscue on the next possession when Guard quarterback Grant Hanks had his first toss of the year intercepted by Trey Erwin. Three plays later, Edgewood’s Ty Elie ran up the middle from 6 yards for a 14-0 Bulldog lead at the 8:40 mark of the first quarter.

Hanks bounced back, throwing for 223 yards and three scores to rally Brook Hill to a 28-22 halftime lead.

The first Brook Hill score came on the last play of the first stanza as Jacob Dumesnil took an end-around from 15 yards out, and Ty Overbeek booted his first of four first-half PATs to make it 14-7.

Hanks then got hot and threw his first TD of the season to Seth Brasher from 27 yards out. The Overbeek PAT kick knotted the game at 14-all.

The Bulldogs answered back with a huge 79-yard pass from Tyner to Devin Davison for the score, and Tyner’s PAT run made it a 22-14 Bulldog advantage.

Hanks jumped back in the game and found Brashear again for an 8-yard TD.

The Guard got two interceptions in the first half. The first pick came from Campbell Fletcher to start the second quarter rally for Brook Hill. Later at the 2:41 mark, Alex Hale turned back another Bulldog drive with an interception in the Edgewood end zone.

Facing a fourth-and-6, Guard running back Gabe Lucio snagged a Hanks swing pass and ran it in from 39 yards. Overbeek’s PAT ended a wild first half.

Brasher paced Brook Hill with five catches for 120 yards and two scores at the half.

Brasher and Hanks continued in the second half, closing out the opening drive with a 9-yard TD for a 35-22 Guard advantage.

Edgewood bounced back with a 61-yard TD hookup from Tyner to Davison. A failed PAT run left the score at 35-28.

Brook Hill took only three plays to answer back with a 70-yard pass from Hanks to Dumesnil, and the PAT kick made it 42-28.

The Bulldogs got an 8-yard TD snag from Trey Erwin to up the score to 42-36 after Tyner ran in the PAT.

Brasher then made his final TD catch of 61 yards from Hanks, and Overbeek remained perfect in PATs as the Guard went up 49-36. Edgewood closed out the scoring at the 2:31 mark of the third period, with Tyner running in from 12 yards out. A failed PAT run left the game at the 49-42 final.

Tyner threw for 295 yards for Edgewood.