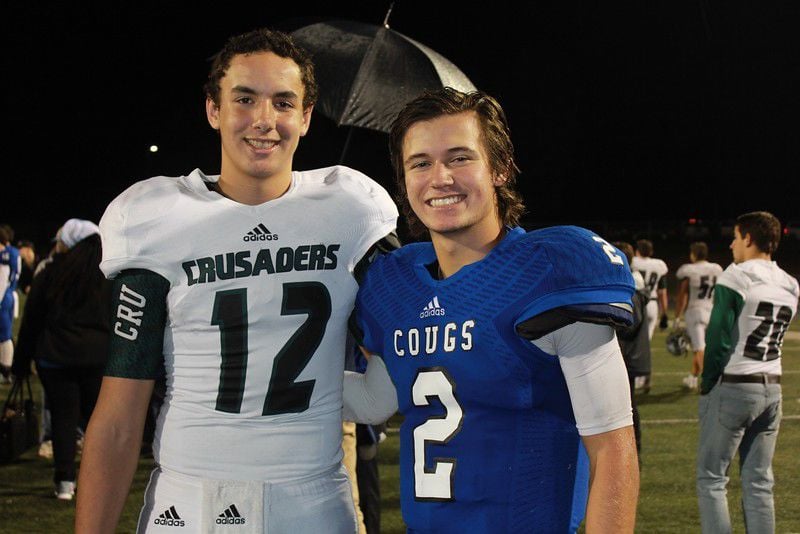 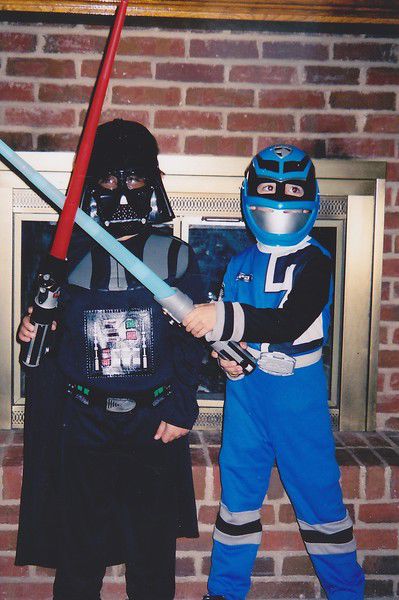 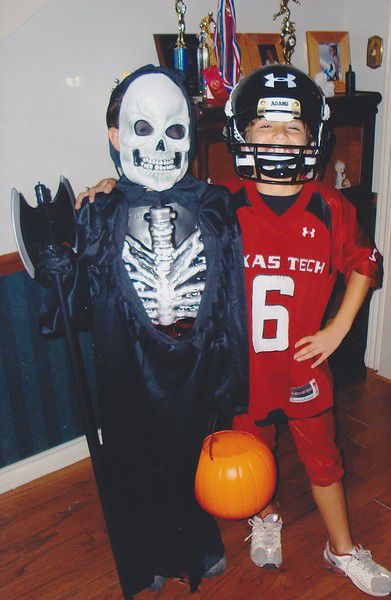 Bishop Gorman sophomore quarterback Jake Smith (left) is dressed as a skeleton and Grace Community senior quarterback Christopher Wilhelmi is dressed as a Texas Tech football player for Halloween one year. The two quarterbacks grew up trick-or-treating and playing football together. On Friday they'll face off head-to-head as starting quarterbacks for the first time. (Courtesy)

Bishop Gorman sophomore quarterback Jake Smith (left) is dressed as a skeleton and Grace Community senior quarterback Christopher Wilhelmi is dressed as a Texas Tech football player for Halloween one year. The two quarterbacks grew up trick-or-treating and playing football together. On Friday they'll face off head-to-head as starting quarterbacks for the first time. (Courtesy)

Year after year growing up, Christopher Wilhelmi and Jake Smith would don costumes and hit the streets together to go trick-or-treating.

Outfits included a "Scream" mask that oozed blood with the pump of a heart, the blue Power Ranger, a scary skeleton, Captain Jack and Darth Vader, complete with breathing apparatus.

This Halloween weekend the friends will once again be dressing up together, only instead of searching for candy in scary disguises, they'll be wearing opposing uniforms searching for a sweet victory.

Wilhelmi, a senior at Grace Community, and Smith, a sophomore at Bishop Gorman, will quarterback their respective schools in the annual showdown between the rivals on Friday at Clyde-Perkins Stadium.

The two have known each other basically since Smith, two years younger, was born. Family friends who live down the street from each other, they grew up playing sports and video games together.

Both Jake and Chris have two older sisters who were friends. When the families would get together, the two younger boys would go off and play football, soccer or basketball outside or "NCAA Football" or "Call of Duty" inside.

Now that both are starting quarterbacks on opposing teams, they'll be competing once again, only with higher stakes.

"It's always fun playing people you know, people you've been friends with," Smith said. "It'll be backyard football again and it'll be fun."

Both Wilhelmi and Smith have had prolific seasons thus far, albeit shortened somewhat by injury. Both were named American State Bank Player of the Week this season.

Smith didn't start until the second game of the season after tearing his meniscus in the spring. Nonetheless through seven games he has completed 155 of 245 passes for 3,106 yards, 29 touchdowns and six interceptions in his first season as the starter for the Crusaders.

Wilhelmi, who threw for 2,000 and ran for 1,000 yards as a junior, missed the first five games of the year with an MCL injury. So far he has 732 yards, eight touchdowns and one interception in about 2.5 games of play, completing 77 percent of his passes.

"It's probably one of your worst nightmares when you start out your senior year (injured)," Wilhelmi said. "It could've been a lot worse and I'm thankful it wasn't any worse."

Friday's meeting between Gorman (4-4, 3-1 TAPPS D-II District 2) and Grace (5-3, 3-1) could determine which team earns a home game in the first round of the playoffs, not to mention plenty of bragging rights.

The Smith and Wilhelmi families know all about the Grace-Gorman rivalry. Smith's sisters Brie (2010 grad) and Danielle (2013) played basketball at Gorman while Wilhelmi's sister Riley (2010) played soccer and Madison (2012) was a cheerleader at Grace.

"When I was in elementary school and hearing my girls talk about the rivalry with Grace, I really didn't understand it," Smith said. "‘It's just another school shouldn't all games be just as fun?' I never really understood it until I got the chance to play against them to see how much fun it is."

Smith saw a little action late in the game against Grace last year, a 34-13 Cougars win in which Wilhelmi ran for three touchdowns.

Wilhelmi said Smith and the Crusaders will provide a big test for the Cougars defense. Gorman is averaging 622.6 yards per game while Grace is holding opponents to 286.1 yards per game.

"It'll be a great game," Smith said. "It's always fun playing in big games like these."

Almost as fun as trick-or-treating.

All growing up, football was a common theme, even on Halloween. Wilhelmi once went dressed as a Texas Tech football player.

Wilhelmi said it was a tradition, which lasted until a few years ago.

"Every year it was: ‘We're going over to the Smiths', get your costume on,'" Wilhelmi said. "We're going to hang out, play some football before and then go out, go around the neighborhood and try to get as much candy as possible and then afterwards making some trades, trading candy."

Once again, Smith and Wilhelmi will be getting their costumes uniforms on and playing some football.

Candy might not be traded afterward, but win or lose it will be a treat to watch for fans of both schools.