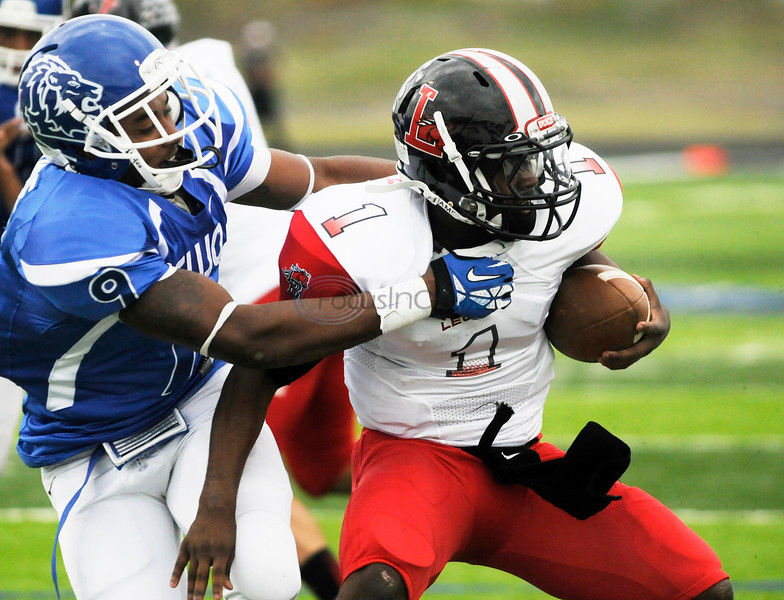 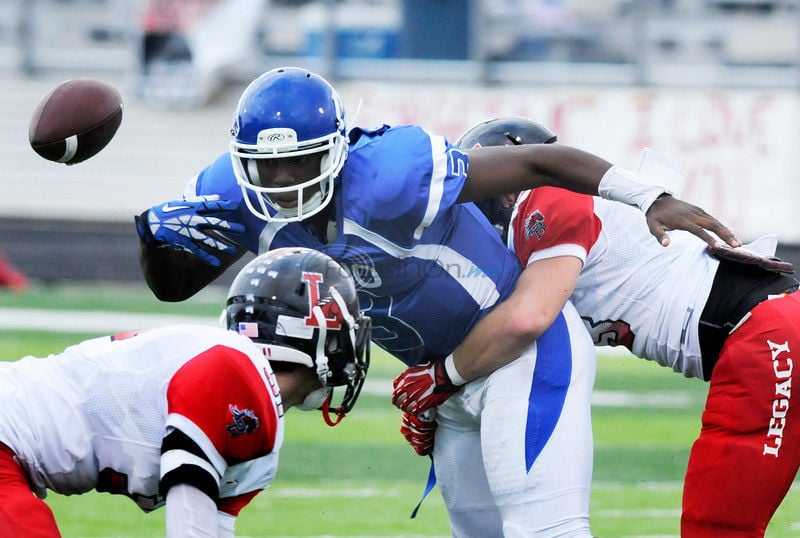 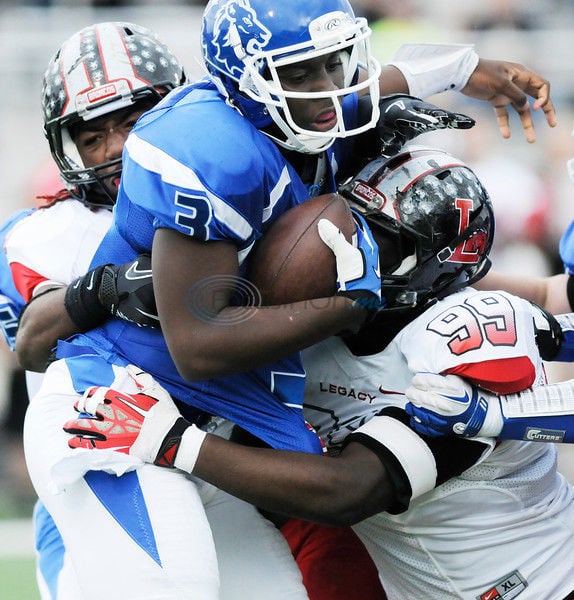 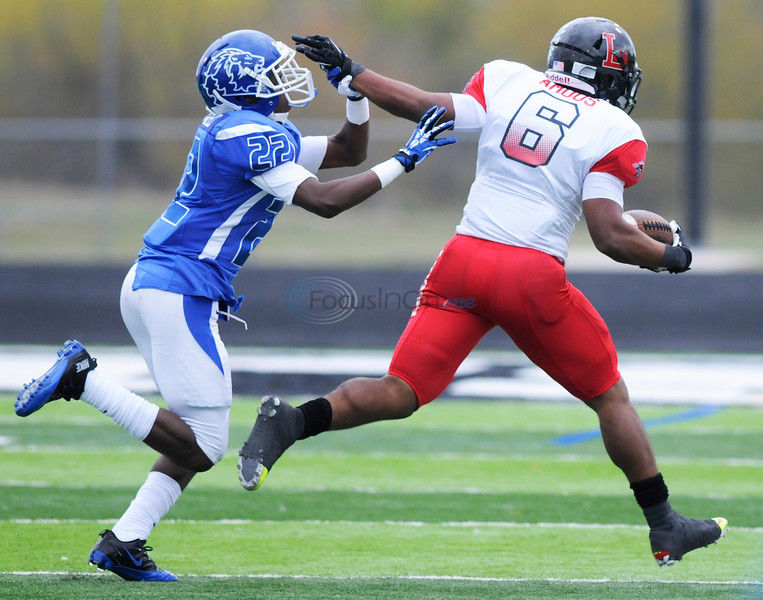 For a young school like Mansfield Legacy, Saturday's bi-district playoff was an opportunity for a program-building victory.

Legacy, in the playoffs for the second time in school history, had three 100-yard rushers and a thumping defense that limited the Lions to their worst performance of the year en route to a 35-14 victory in the Class 4A Division I playoffs at City Bank Stadium.

John Tyler (7-4) was denied in the first round of the playoffs for the first time since missing the postseason in 2007, the year Legacy opened. The Lions' last bi-district loss came in 2006 to Dallas Carter, 31-21.

The Broncos (9-2) set a school record for wins and will play McKinney North (7-4) at 7:30 p.m. Friday from Kincaide Stadium in Dallas.

"(We've) never beat a team like Cujo," said Legacy coach Chris Melson, who's coached the Broncos since the program's inception.

Legacy's Kijana Amous ran for 153 yards and two touchdowns, quarterback Terrance Ivery racked up for 151 yards rushing and second string running back Kenton Mayberry added 107 yards and a score for the bruising Broncos, who ran 66 times on a windy afternoon.

"That's what we do; we run the football," Melson said. "In the wind, it was an advantage for us today — disadvantage for them. We felt like if we could just keep driving into the wind and making them throw into it, we'd have a chance and it just worked out."

The Lions finished with season lows of 14 points and 243 total yards and were shutout in the first half, the first time they went scoreless in a half all year.

With winds consistently blowing from the south end zone to the north end zone at 20 mph, the Broncos tried to keep JT junior quarterback Geovari McCollister in the pocket, Melson said. McCollister ran 26 times for 37 yards and a touchdown, losing two fumbles that were recovered by defensive end Harris Tafah.

"You gotta keep him hemmed in because he's too dangerous outside the pocket, receivers too good on scramble drill and we felt we've got to keep him in there so we can cover them and it worked," Melson said. "(Our) effort was great, our plan worked — they executed it almost to perfection."

Though John Tyler struggled to move the ball, it had plenty of chances to score but was unable to capitalize.

In the first half the Lions turned the ball over on downs at the Broncos 21 and 15 and lost a fumble at the 25, which Tafah returned 22 yards after neither team immediately jumped on the loose ball, assuming the play was dead. Tafah's other fumble recovery came at a pivotal moment in the third quarter.

After Dyran McDuff's 37-yard run set up McCollister for a 3-yard touchdown run to make it 21-7, JT senior Jalen Jones pounced on a high pooch kickoff that Legacy couldn't field at its own 21. Three plays later, however, McCollister was sacked for a 12-yard loss, losing the ball in the process.

John Tyler senior defensive back Jordan Caldwell had an interception and a fumble recovery. Senior linebacker Andrew Clark also recovered a fumble that led to a 16-yard touchdown reception by Nick Cain to make it 28-14 with 8:50 to play, but the Lions went three-and-out on their next possession and never touched the ball again.

Legacy, which averaged 6.4 yards per rush, ran out the final 6:27 with a 13-play drive that started at the 3 and reached the JT 1 before the Broncos knelt twice to end the game.

"I think the passion part is there for my kids. … We're going to come back stronger than we were this year."

Cain led all receivers with eight receptions for 88 yards, more than half of McCollister's 142 yards on 14 of 25 passing. Senior Andre Crawford just about doubled his season totals coming in with two catches for 15 yards.

Ivery didn't have to throw much, but he was effective when he did. He completed 5 of 7 passes for 102 yards and two touchdowns.

After the Broncos started the game with 21 consecutive runs, Ivery completed a screen pass to Gentry Ivery for a 49-yard touchdown to put Legacy up 14-0 in the final minute of the first quarter. On fourth-and-4 early in the third quarter, he found Gentry Ivery again for a 24-yard touchdown and a 21-0 advantage. Terrance Ivery had a key 20-yard pass to convert a third down during a 10-play drive that ended with Legacy leading 28-7.

But it was the Broncos' ground game that was most effective. Amous, who limped off the field early in the fourth quarter and did not return, ran 30 times, Terrance Ivery 20 and Mayberry 15, most after Amous left the game.

The 420 yards allowed on the ground were 109 more than the previous high allowed by the Lions. Legacy's 522 total yards also passed Whitehouse's 514 yards against the JT defense as the most allowed this season.

"I think next year's defense is going to be a lot better," Holmes said.

John Tyler punter Luis Duran had a strong day despite the win, averaging 39.4 yards on five kicks, downing three inside the Legacy 10. However it wasn't enough for the Lions, who averaged 4.1 yards per play, three yards less than their average coming into the game.

"I think we had a lot of success in certain areas (this season) but there's a lot of stuff we need to work on to win a state championship," Holmes said.

Class 4A Division I Bi-District Playoff