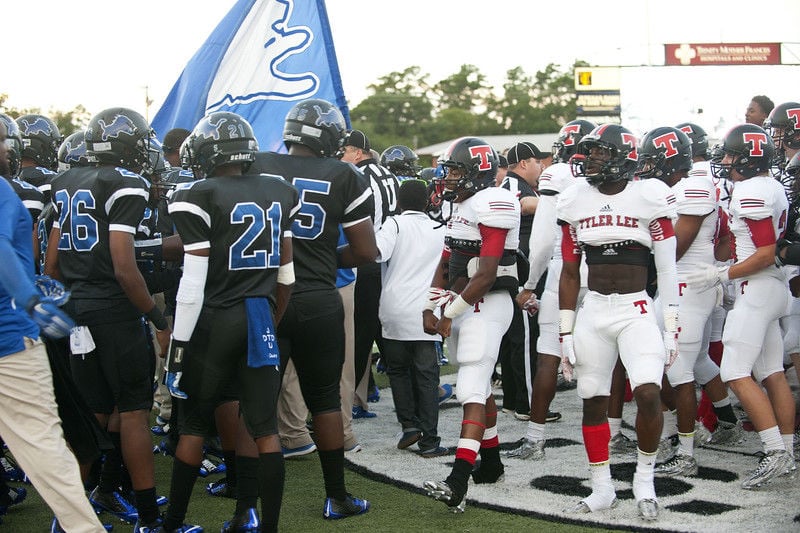 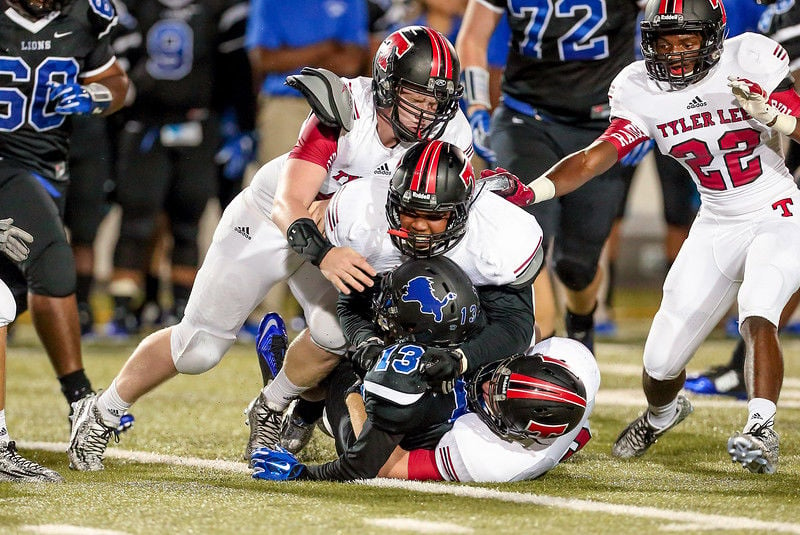 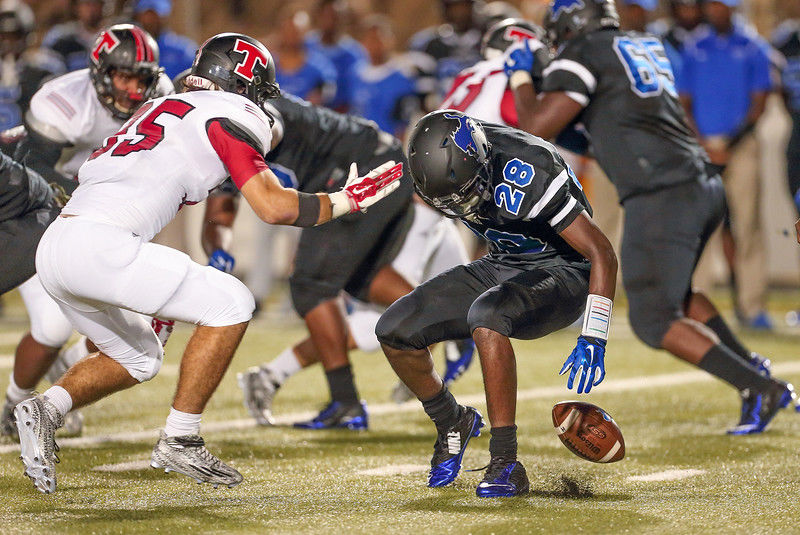 John Tyler's Martavious Allison (28) fumbles the hand-off as Robert E. Lee's Grayson Calhoun (35) scrambles for the loose ball, in the first half of their contest at TMF Rose Stadium. ( Lang white / Correspondent )

John Tyler's Martavious Allison (28) fumbles the hand-off as Robert E. Lee's Grayson Calhoun (35) scrambles for the loose ball, in the first half of their contest at TMF Rose Stadium. ( Lang white / Correspondent )

The hope around town when Robert E. Lee and John Tyler were brought back into the same district and playing on the final day of the regular season was both teams would have something meaningful to play for, be it a district championship or playoff seeding.

In the first district meeting between the Rose City Rivals since 2009, the Lions are a win away from the District 11-6A title while the Red Raiders are still searching for their first league victory.

But that's not to say there isn't anything on the line for Lee.

With a win, Lee could even the all-time series for the first time and, in doing so, deny John Tyler a league crown and a home playoff game.

John Tyler coach Ricklan Holmes, who went 4-0 against Lee as a player is 2-2 as a head coach. He said it's personal when it comes to Lee threatening to tie the all-time series.

"This game right here, this is about righting the ship," Holmes said. "This is about reclaiming our dominance in our city. It's about the takeover. It's about understanding that there are two high schools in Tyler, Texas, but to us, only one matters, and that's John Tyler."

"I know it means a lot to the city and a lot to these kids," first-year Lee coach Clayton George said. "They've grown up playing against these guys. They've played each other since they were in grade school. It's exciting for them and an exciting challenge for us."

The Lions (8-1, 5-1 District 11-6A) are a win away from the district championship. Tied with Longview at 5-1, JT holds the head-to-head advantage that would grant the Lions a home playoff game in the bi-district playoffs, likely back at Rose Stadium against Lufkin. The Lobos host Mesquite on Friday.

The Red Raiders (2-7, 0-6) haven't won since Week 2 against Corsicana, when Lee moved to 2-0. However Lee has been excruciatingly close to wins the last few weeks, losing three games by a combined 10 points.

"We've fallen short several times, but we have one more chance to make it right and play a full 48 minutes," George said.

"They've got a good football team," Holmes said. "They've got some athletes over there that can get it done."

John Tyler had a healthy lead over Lee in the all-time series when Holmes graduated, but after coach Allen Wilson left JT and Mike Owens took over at Lee, the Red Raiders won 12 of 13 from 1999 to 2009.

Lee junior quarterback Chance Amie, who made his varsity debut in this fixture last year in place of starter Zach Hall after he suffered an injury, has 1,174 yards and 17 touchdowns on the ground to go with 1,465 yards and 10 TDs through the air.

Ladarius Wickware has been a powerhouse of late, rushing for 849 yards in the last four games. He has 1,185 yards and 12 TDs on the season, averaging 7.9 yards per tote.

"That's one of our focal points on defense; we've got to make sure that we keep those guys in check," Holmes said. "Guys like that you're not going to be able to stop; they're too talented to just stop. We've got to slow them down just enough to where we minimize their big plays."

On the other side, John Tyler senior quarterback Bryson Smith has thrown for 2,214 yards and 25 touchdowns while adding 1,034 yards and 12 scores rushing.

"He's one of the best we've faced, if not the best," George said. "He's dual threat with a very live arm, very accurate and equally as dangerous with his feet. If the pocket breaks down and he scrambles, he has hurt a lot of teams with his feet.

"That is what the good quarterbacks can do, the ones who are true dual threats. We'll have to try and contain him to be in this ball game."

Texas commit Damion Miller leads the JT receivers with 653 yards and seven touchdowns, averaging 25.1 yards per catch, while sophomore Cameron Grant is the top running back with 659 yards and six TDs, averaging 6.7 yards per carry.

Defensively is where, at least on paper, John Tyler holds the edge.

"If we continue to do what we've been doing these past couple of weeks, we shouldn't have a problem with scoring points and stopping them," Smith said. "Our defense has been playing good defense."

But, like any good rivalry, you can throw out records and previous performance once the teams meet on the field.

"It's not just any game - it's personal because the last previous two games we've lost to them," Smith said. "It's a different meaning behind it and we feel like it's personal this year, more than it's ever been."

That's not to say it's not personal for the Red Raiders. Lee has played second fiddle to John Tyler on the football field since inception, never able to eclipse the accomplishments of the school that has produced three state championships and a fellow by the name of Earl Campbell.

Lee would love to finish the season with a win to take some momentum into the first full offseason under first-year coach Clayton George. Doing so at the expense of an archrival would be almost as sweet as a playoff berth.

"Our kids came in this week (knowing it was our season finale), and were ready to work, ready to prepare for victory," George said. "Their perseverance of staying the course and trying to get a win, I commend them for that."

Either way you look at it, it's a big game. And, for the first time since 2003, the Rose City Rivalry is being played as a district game on the final game of the regular season.

Everything is on the line, from pride to playoffs.

"Tyler's a city and it has two high schools, meaning it's divided," Holmes said. "However y'all want to look at it, it is divided. It's a little different around here, especially when John Tyler and Robert E. Lee get to play each other.

"This year it's personal. It's something we've got to do. We need this victory. … We need to make a statement."

Quick Slant: Ultimate bragging rights in the Rose City are on the line and - more than that - a district championship for John Tyler. The Lions can clinch the title with a victory and in doing so sew up a first-round playoff date back at Rose Stadium next week, likely against Lufkin. The Red Raiders, meanwhile, can even the all-time series, one they've trailed since losing the first five meetings starting in 1958. Smith is averaging 360.9 total offense this year but was picked off by Sanders in last year's meeting. Amie made his debut at QB vs. JT last year, coming in as a sub for the injured starter and totaling 118 yards and a touchdown.

Lee sideline: "We are trying to focus on winning a football game. We always want to win the next game. Its always next game up and this game happens to be Week 10." - Lee coach Clayton George.

JT sideline: "It's how I'm used to it. I'm used to it being the last game of the season with all everything on the line as far as a district title, playoff appearance, moving forward having them bragging rights that really mean something now." - JT coach Ricklan Holmes.