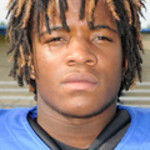 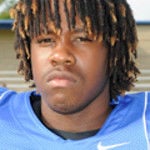 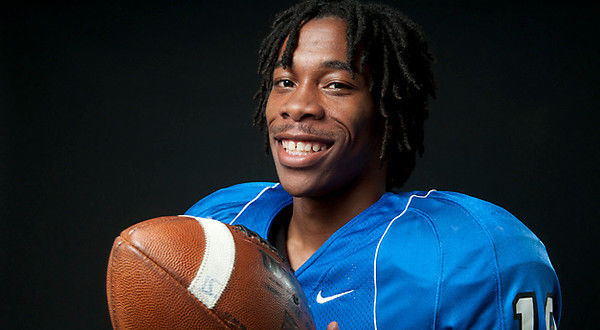 John Tyler calculated a winning formula the past four games, with ‘Devonte X 3’ a big factor in the victory equation.

Just remember to use their last name to avoid any confusion. All three were born the early 1990s, an era when the R&B group Jodeci dominated the music charts, thanks in large part to arguably the group’s most popular member, DeVante Swing.

“We get mixed up a lot at school, and coaches get us mixed up,” Jones said. “It’s fun.”

Of the trio, only Haggerty started last year. Now each plays a key role for a team starting barely a handful of seniors.

“Not that many seniors are playing on varsity,” said Black, JT’s reigning homecoming king. “We have to be leaders on the field, classroom and in public.”

Haggerty leads JT in all-purpose yards per game (153.4) while lining up under center, behind the quarterback, split wide and deep on returns.

“Haggerty’s a young man that loves the leadership role on the offensive side,” JT head coach Dereck Rush said. “He’s a real fun guy to be around. He’s been doing it all this year. He’s the total package.”

Black tops the team in takeaways (five) while Jones came into his own last week with eight tackles, a sack and a forced fumble. Both Black and Jones switched to the middle unit after playing other positions the past three years.

Their progress proved much-needed for a JT unit saddled with injuries in non-district, starting with the season-ending loss of promising sophomore Jorean Jackson, a projected starter, and continuing with the absence of two other starting linebackers for two games.

“Jones and Black have definitely had to step it up playing new positions,” Rush added. “Black has been on offense since he walked on campus. He had to adapt to the scheme of things and he’s doing a great job of being a vocal leader. Same thing with Devonte Jones. He walked in as a running back and defensive back. He’s another guy who had to adjust in a short period of time. He’s one of our top linebackers now.”

Black, the starting weakside linebacker, ranks second on the team in tackles (53) and rotates at inside receiver.

“You have to be open-minded and just do your best (wherever) they put you,” said Black, who has recovered a team-best three fumbles along with tying for the lead in interceptions with two. “We’ve been more determined on our goal: to get a district championship.”

Jones starts at strongside linebacker and doubles in the kicking game, where he averages a solid 11.5 yards on punt returns. He also ranks third on the team in tackles (42), with six stops behind the line of scrimmage.

“You have to be open-minded and do whatever you have to do help your team,” said Jones, who has played varsity baseball since his freshman season, and everywhere in the outfield, infield and catcher. “It’s a big difference between DB and linebacker. I’m starting to get a feel for it.”

Haggerty helps an already explosive offense with his ability to play any skill position.  He scored a season-best four TDs in the district opener, then missed two games to injury. JT averaged 574 yards and 53 points during his brief absence.

“With me being out, I was really able to watch and see what we can do,” said Haggerty, who has scored six TDs. “We’re ready to play. People have started buying in to what coach Rush has been preaching every day. At first it was (us making) assumptions instead of asking questions. Now we’re coming together and communicating better.”

JT (4-3, 4-0 in 14-4A) resumes its quest toward a district championship on Friday at home against Marshall (2-5, 1-3). The Lions learned from the last four weeks not to “get too laxed, just because we’re the (front) runners,” Haggerty said.

“We have to do the little things. If not just like (we lost) the first three games, it’ll happen again. As long as we listen to the coaches and do what they tell us to do we’ll win.

LIONS’ TALES: John Tyler, unbeaten within its classification, is ranked No. 13 by TheOldCoach.com and No. 19 by TexasFootball.com. According to pressboxservices.com, the official statistics website for the Texas High School Coaches Association, JT junior receiver Fred Ross ranks fifth in the state in total receptions (48) with junior quarterback Greg Ward sixth in the Lone Star State in total offense (2,363). Marshall quarterback Alandric Tutt tops the district in rushing (783), with Ross the 14-4A leader in TDs (14).