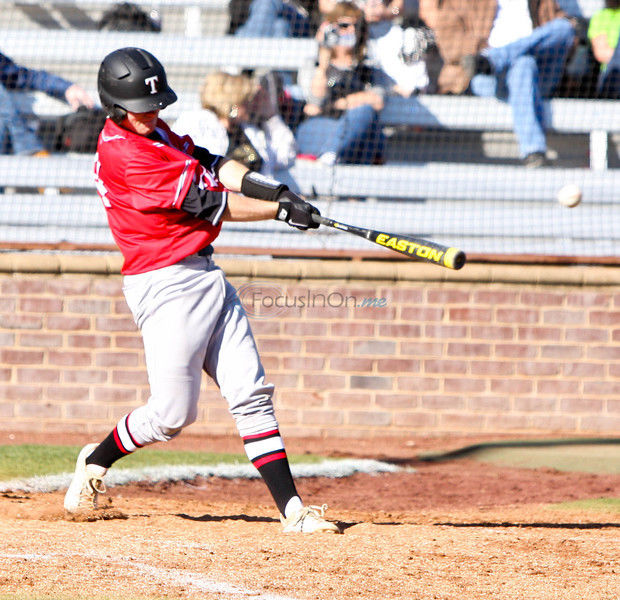 Lee's Marty Antilley tries to get back to third ahead of the tag of Nacogdoches third baseman Bryce Matthews Saturday during the Rose City Classic at Mike Carter Field. He was out on the play. Photo by Jake A. Waddingham

Lee's Marty Antilley tries to get back to third ahead of the tag of Nacogdoches third baseman Bryce Matthews Saturday during the Rose City Classic at Mike Carter Field. He was out on the play. Photo by Jake A. Waddingham

The Red Raiders trailed 4-0 to Nacogdoches in the top of the second and Dragons' Brigham Hill had just doubled to lead off the inning, prompting the pitching change.

The righty reliever's first pitch went to the backstop, enabling Hill to go to third. A long sacrifice fly then made it 5-0.

Carter did not allow another hit and ended up as the winning pitcher.

Lee erupted for 12 runs in the bottom of the third to defeat Nacogdoches 12-5 in five innings in REL's final game of the 22nd Annual Rose City Classic at Mike Carter Field.

The game was called after Nacogdoches batted in the fifth because of the two-hour time limit.

"We talked about keep it there and give our offense a chance and that is exactly what he he did," said Lee coach David Howard about Carter's outing.

"I thought he did a fabulous job."

Despite those unflattering statistics, Lee coach David Howard is only concerned with two — a 12-5 victory and 4-0 start to the season.

"It's late in a tournament on a Saturday and it was just one of those games," Howard said. "Four and 0 is a good first week and you take the positives out of that."

Nacogdoches led 5-0 with Dragons starter Reed Watson escaping a second-and third situation in the first inning and set Lee down in order in the second inning.

The third, however, was a different story altogether.

Carter took it from there, allowing one batter to reach base on a walk in the remaining two innings.

"We've got a great team coming in here on Tuesday," Howard said. "It will be a good challenge for us."