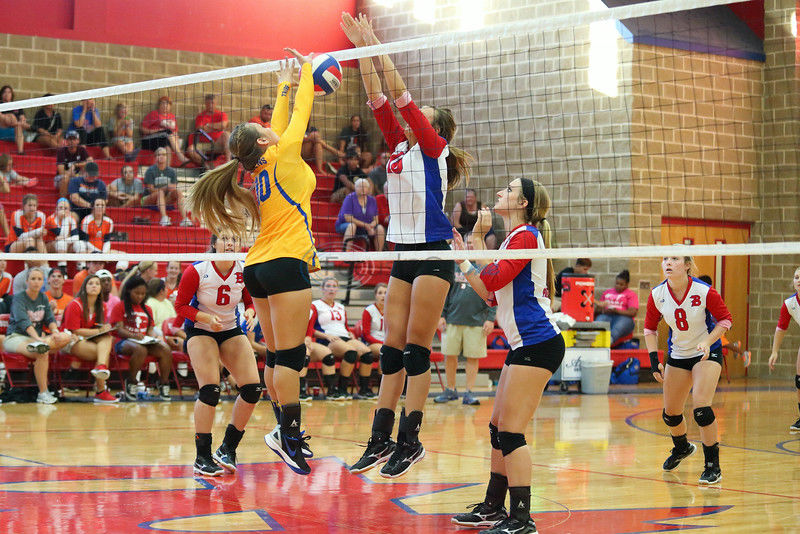 Bullard's Ashtyn Zamazal (10) goes up for the block against Jacksonville on Tuesday in Bullard. (Lang White | Correspondent) 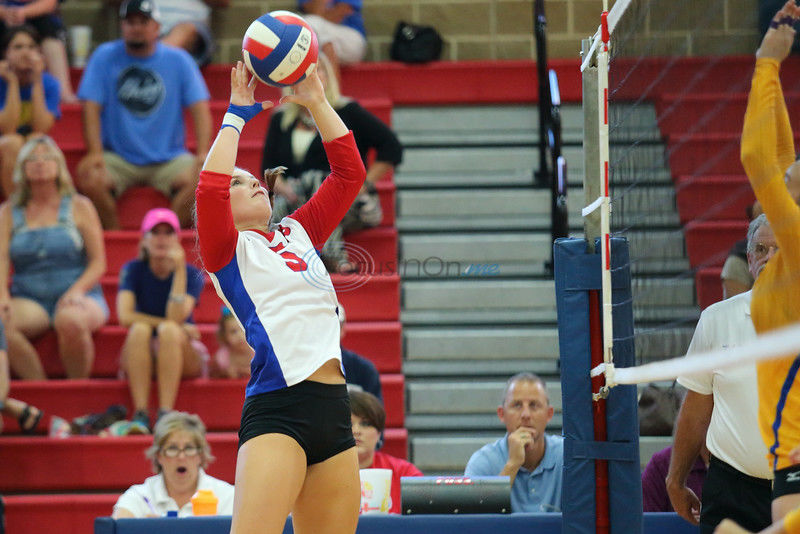 Bullard's Ashtyn Zamazal (10) goes up for the block against Jacksonville on Tuesday in Bullard. (Lang White | Correspondent)

BULLARD — The Bullard Lady Panthers hosted to a tri-match Tuesday against Brook Hill and Jacksonville. The hosts enjoyed themselves too, posting victories over the Lady Guard and Maidens to begin their season at 2-0. Brook Hill bounced back from its season-opening loss to Bullard to defeat Jacksonville in three games in the final match of the night.

Bullard is back on the floor Thursday at the Gary Tournament while Brook Hill and Jacksonville have a week to prepare for the next opponents. The Lady Guard is at home to Carlisle with Jacksonville at Palestine Westwood on Tuesday, Aug. 19.

Brook Hill will entertain Carlisle next Tuesday at Herrington Sports Complex. Bullard will next play a tournament in Gary beginning on Thursday.The Fightin' Maidens next play at Westwood next Tuesday.

Brook Hill put the hosts under a little pressure by taking the opening game of the match, thanks to Lady Guard senior Samantha Anderson, who had seven kills and two stuff blocks in the first game alone. Megan Moss's seven-straight service points and Charlie Niles net play were also key for Brook Hill.

Fish continued her roll with a seven-point service run in game three while Kennedy Key provided numerous digs and outstanding hustle plays to keep the ball in play, resulting in a Bullard game-three win.

The fourth game was a Bullard runaway at first, 18-8, before the Lady Guard regrouped. Behind Anderson (five kills), Niles (four kills, block), Lexi Crenshaw, Avery Langemeier, and Moss, the Lady Guard fought back to make their deficit 18-12, but that was as close as Bullard would allow.

Bullard started slowly, but rebounded fast to put Jacksonville away in three games (27-25, 25-19, 25-17) in their second match. Jacksonville raced out to a 7-2 lead, thanks to the frontline play of Whitney Robinson, Sophia Clater and Janzen Terry.

Neither team blinked as the opening game featured ties at 23, 24 and 25 before a Mackenzie Fish kill helped Bullard emerge with a 27-25 win.

The teams continued their back-and-forth play in Game 2 as Jacksonville's Mosely Shay, Clater and Robinson helped make the score 7-7.

Bullard used strong serving by Sami Sandoval to take control as she reeled off seven straight service points, including two aces, as the Lady Panthers pulled out to a 16-9 advantage and never looked back.

Again Anderson led the way. The senior put down the game-winning kill in the first game and proved tough to stop throughout the match. With Anderson controlling the net (10 kills in Game 2), Mady Parker took advantage to win 14-straight service points and quickly close out Game 2.

In Game 3, Parker and Megan Moss took turns racking up service points while the frontline dominance of Anderson, Charlie Niles and Lexi Crenshaw put the game and the match away.