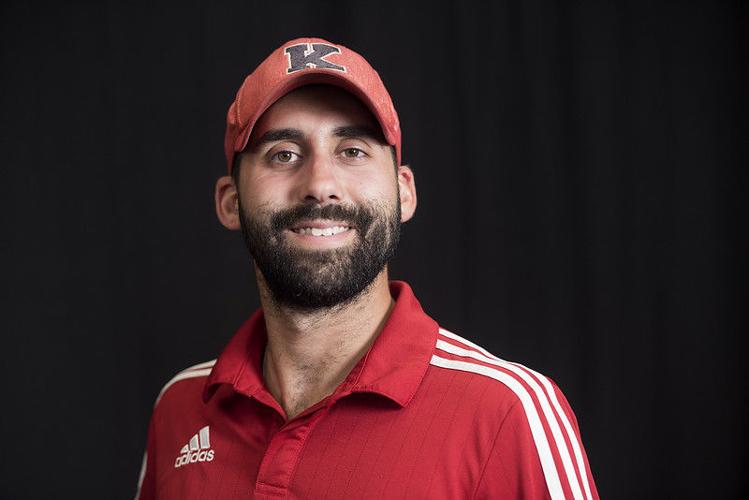 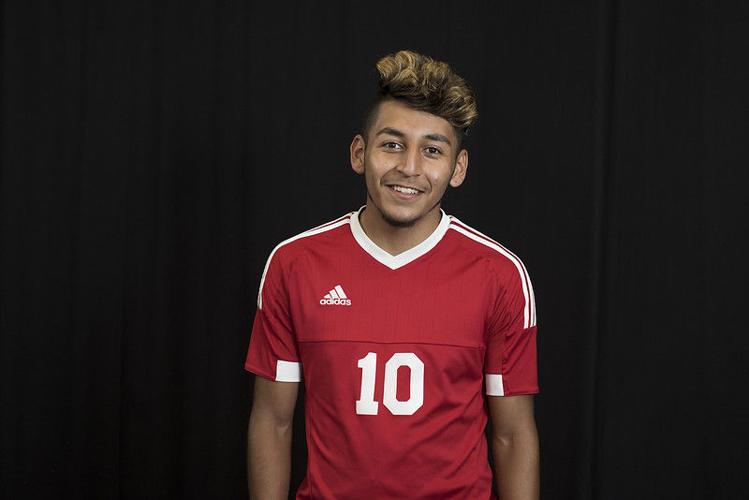 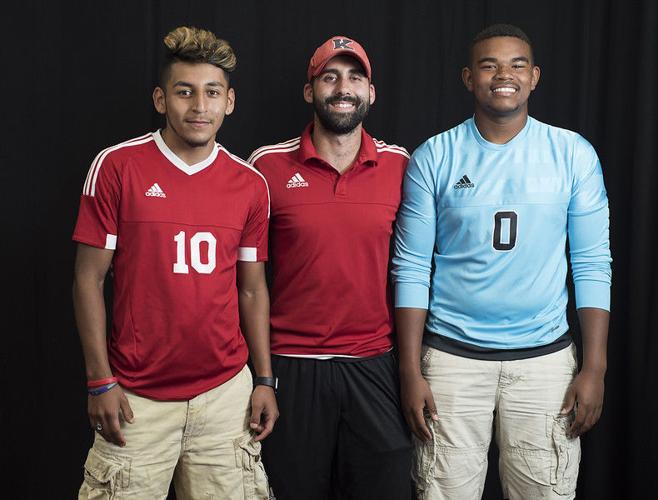 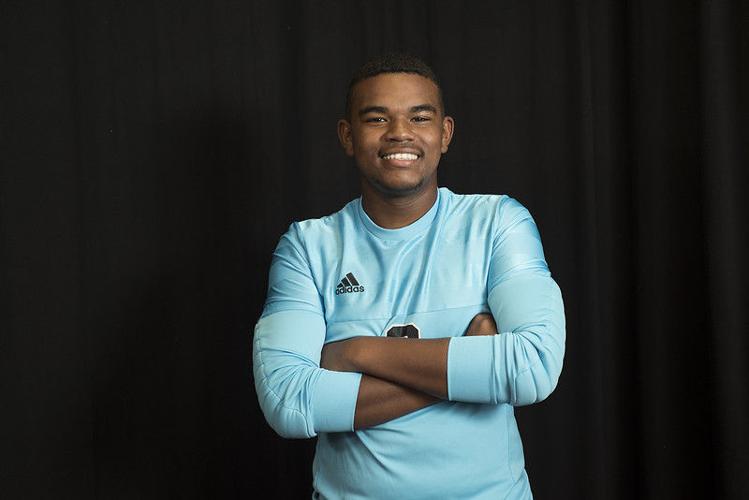 And now Contreras adds his name to the list. The senior is the Player of the Year for the Tyler Morning Telegraph and ETFinalScore.com All-East Texas Boys Soccer Team. He follows Palestine's Bennett Gierkey, who received the honor last year.

Barron was a two-time player of the year in 2010 and 2011 with Perales taking the top honor in 2013 as the Bulldogs goalkeeper.

Contreras did something that neither of those two accomplished to put himself in special company, along with this award. Kilgore captured the program's first state soccer title this year by defeating Bridgeport in penalty kicks.

It was a clean sweep for the state champs this year in superlative awards.

Kilgore's Austin Walker was named Coach of the Year for the second time. He received the honor also in 2015. Walker follows Palestine's John Absalom, who received it last year.

PLAYER OF THE YEAR

Teammate Jett sums up what Yonatan Contreras has meant to the Kilgore soccer program.

Contreras debuted on the All-ET team as a sophomore, earning first-team accolades at midfield. He followed that up in 2016, again as a first-team midfielder.

"It was awesome (to get this award)," Contreras said. "I am just glad I am one of those players who (finished) at the top."

The senior produced a team-high 19 assists to go with 21 goals. He provided the game-winning goal in the 4A regional championship and had one of the Bulldogs four goals in their state semifinal win over Houston Washington. He did not score a goal in regulation over the state final, but may have provided something more important - a successful penalty take during the winning shootout.

"Yoni is a special player, and I knew that when I got (to Kilgore) when he was a sophomore," Walker said. "He scored like 27 goals in his sophomore year or something like that. Once you make that statement, the expectation is how are you going to follow that up as a junior and senior.

"One of the more impressive things I thought Yoni, no matter what situation was thrown his way, he ended up rising to the challenge. He scored a goal or had an assist in every single playoff game we had this year."

The senior said he and the entire Kilgore soccer program was performing for more than just themselves and the school.

NEWCOMER OF THE YEAR

Kaleb Jett has a T-shirt from Kilgore's state tournament appearance in 2015. It says: Best Ball Boy at State.

"When I was a freshman, I asked coach if I could be a manager for the team," Jett said of his introduction to Kilgore soccer.

The junior, in his first year as a varsity goalkeeper, was the shot stopper Kilgore needed to bring back the title.

"My life has improved, I can tell you that," Jett said of receiving the newcomer honor. "I went from being a ball boy as a freshman … a backup's backup as a sophomore; I was a third-string goalie to now junior year starting, a state champ and (tournament) MVP. You couldn't ask for anything more."

Walker said the goalkeeper position was not solidified at the start of the season with Kilgore doing as much as trying out a football player for the position. Through it all, Jett kept working.

He won the job and was in net for pre-district. He made a decent impression, but it wasn't until a 2-1 win over district rival Henderson that Walker knew Jett was the choice going forward.

"He had a couple real good saves in the Henderson game and I remember looking at my assistant and saying, ‘I wasn't sure, but I think he could do this for us,'" Walker said.

Jett saved his best for last. He made a game-winning save in the final minute in Kilgore's regional final victory over Carrollton Ranchview to put the Bulldogs into the state semifinals. He posted a clean sheet in the semifinal win over Houston Washington.

"He stepped it up," Contreras said of his keeper. "He did his job. He went out there and did his thing and saved us."

Jett's biggest "thing" was being prepared for a penalty shootout.

"I can't tell you how many times we're warming up and he's like, ‘Hey coach, come take PKs on me because I want to do it,'" Walker said. "It got him so comfortable, so that when that moment came, he was like, ‘It's fine. I've got (this).'"

The moment was the state championship game. Kilgore and Bridgeport had battled through regulation and overtime and were knotted at 2-2.

A penalty shootout would decide state.

A year ago, Jett watched as a backup when Kilgore lost to Palestine in the state semifinals in a penalty shootout.

Now it was his chance to deliver and bring back a title.

"When we went to PKs, I knew we were going to win," Jett said. "We practice PKs every single day."

Jett saved the final two attempts to clinch the title.

COACH OF THE YEAR

Kilgore's Austin Walker is moving to the Dallas-Fort Worth area and leaving a lasting legacy. Walker coached the Bulldogs to state in all three of his years at Kilgore, and is departing as a state champion.

A two-time coach of the year, Walker admits to not knowing what to expect when the season began.

"We lost in the state semifinals (last year) and graduated 11 seniors," Walker said. "But even with the guys I'd lost, there was a good core group that was there like Yoni, David, Jaime (Veloz), Jesus (Gonzalez) and Jose (Gonzalez). … You had a lot of people who had been there and experienced it."

Before a ball was kicked, the team's focus was forever changed after the sudden death of Samantha Watkins. She was a member of the Kilgore girls' soccer team and someone the players knew well.

"Sam passed and it was devastating for the girls' team, the guys team and all of us," said Walker, who still wears a bracelet in honor of Watkins with the hashtag #SamStrong and #21 on it.

"She'd impacted every person in both programs in some way, form or fashion. Even the young ones on the boys team kind of understood. … It was one of the more difficult things I have ever had to go through as a coach."

Walker said Kilgore began the 2017 season wanting to get back to state and finish the job. Now the team had something much more important inspiring their play: winning for Sam.

"When the girls got knocked out (of the playoffs), it wasn't like it just disappeared," Walker said. "Sam's mom was still at all the guys' games. It really was a pushing force for us."

Kilgore did not go far in the playoffs before a rematch with Palestine, the reigning state champs, in the regional quarterfinals. In a tightly contested match, Kilgore broke away in the second half to deal Palestine its only loss of the season, 4-2.

Contreras's goal-scoring and Jett's goalkeeping continued to push Kilgore along until the players were celebrating a state title while Garcia, who had suffered an injury in the semifinal and was on crutches, held Watkins' jersey aloft.

"That was something that the guys really wanted to do," Walker said. "We talked about ‘This season is going to be about her.' Not only was it just such an unreal moment working for three years to get there, you throw that on top of it and it was just crazy.

"You couldn't write a movie and have it end any better."