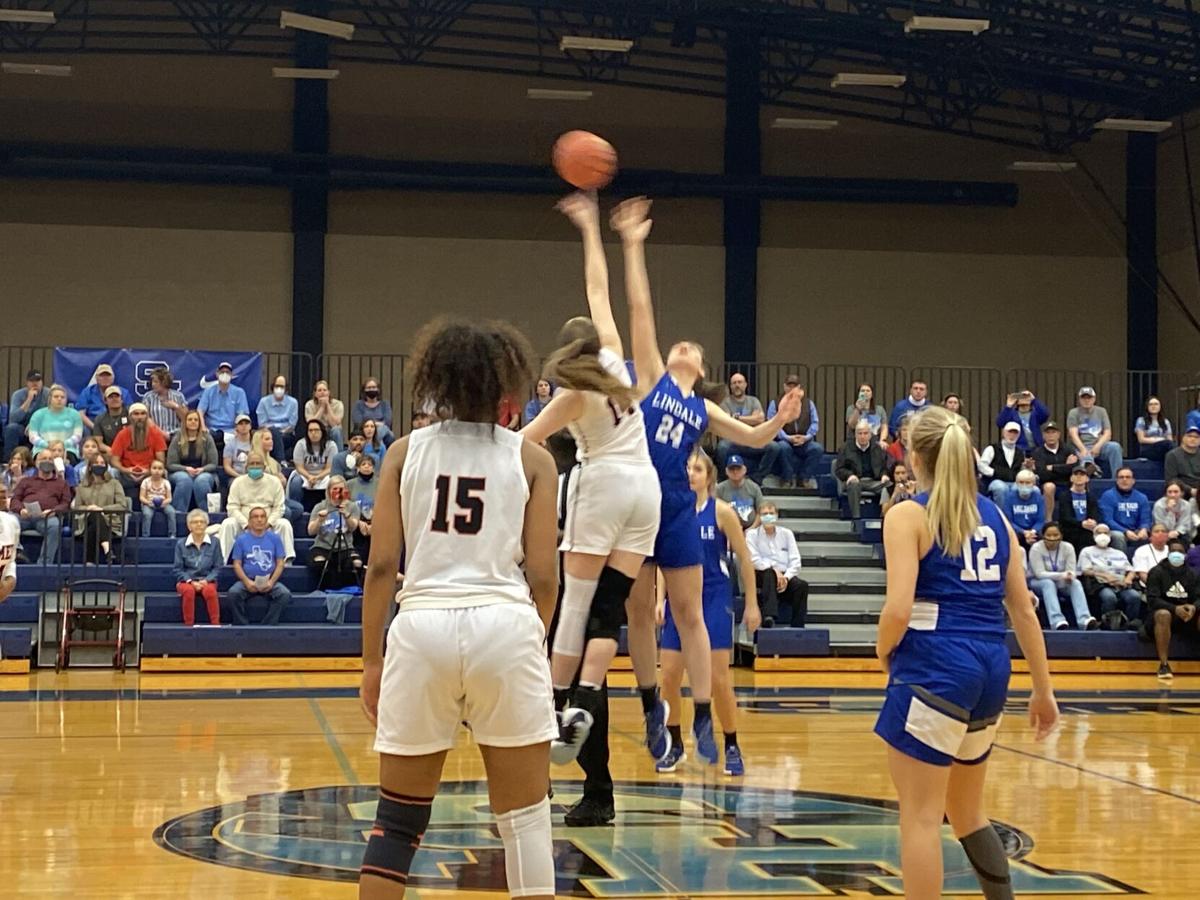 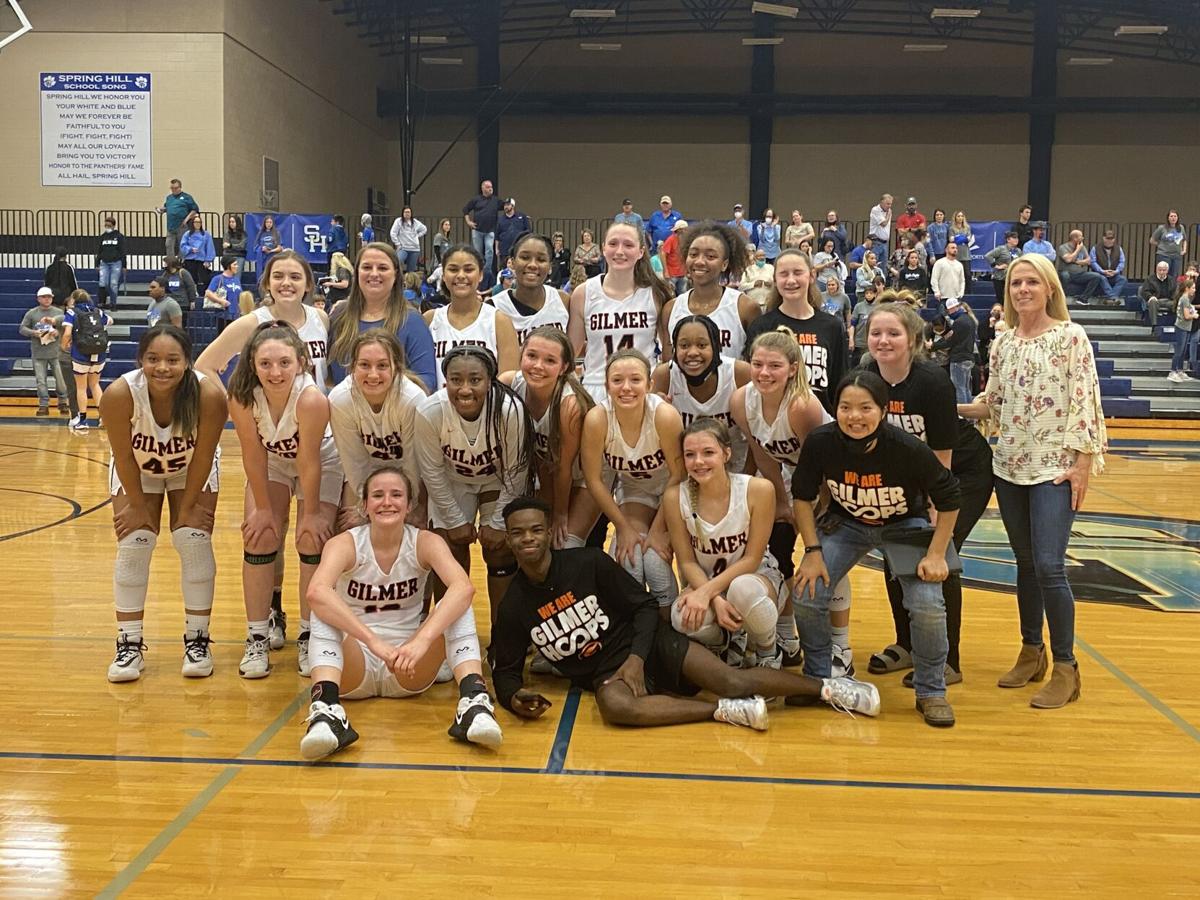 Gilmer celebrates a 37-34 win over Lindale on Wednesday.

Gilmer celebrates a 37-34 win over Lindale on Wednesday.

LONGVIEW — Lindale overcame a cold shooting night to put itself in position late on Wednesday night.

But in the end, Gilmer held on for a 37-34 win in the Class 4A Region II girls basketball quarterfinals at Spring Hill’s Panther Gym.

The win sends Gilmer to the regional semifinals for the first time since 2018.

“I am very proud of this team,” Gilmer head coach Mandi Simpson said. “These seniors have been with me for a long time. We went to regionals my first four years in a row. And then the last two, we got beat out in the third round and then got beat out in the second round right after my dad passed away last year. It just feels good for our program to get back there. Of course, we want more.”

The Lady Eagles were 0-for-19 from 3-point range through the first three quarters.

That first made triple came with 4:54 left in the game as Lily Chamberlain connected from way downtown to cut the score to 30-27. With 2:55 remaining, Brooke Everest got a steal and got the ball to Kalaya Pierce, who converted a layup to make the score 30-29 as part of an 11-0 Lindale run.

On a baseline inbounds play, Raeven Harris found a wide-open Haylee Jordan in the corner for a three. Jordan had made the game’s first 3-pointer in the third quarter, as well. Madyson Tate then came up with a steal and sank two free throws to give the Lady Buckeyes a 35-29 lead with 2:20 to play.

Freshman Marley Keith then hit a stepback three in the corner to cut the score to 35-32 with 2:09 on the clock. Gilmer turned it over. Jordan and Keith traded blocked shots and then Chamberlain missed a tying 3-point attempt. Following another Gilmer turnover, Keith’s attempt from three was no good. Gilmer got the rebound, but gave the ball right back to Lindale with 27 seconds to play.

With Lindale looking to tie, Gilmer’s LeLe Morton stole the ball and took it the other way for a layup with 12 seconds on the clock, making the score 37-32. Keith quickly sprinted the ball down the court for a layup to put the score at 37-34 with 2.4 seconds remaining.

After a timeout, Lindale forced Gilmer to lose the ball out of bounds with just 0.4 seconds left. With one final opportunity, Pierce inbounded the ball to Chamberlain, who fired from the volleyball line, but the shot was off the mark.

“Their pressure gave us a lot of trouble clearly, and the referees were letting us play, which was fine because it was both ways,” Simpson said. “But we struggled with that. We just came up with it at the right times. We had a lot of opportunities. There’s no telling how many turnovers we had, but it just happened at the right time for us to find a way to win.”

Jordan, a 6-2 senior, led all scorers with 14 points while also adding 14 rebounds and six blocked shots. Addison Walker had 7 points off the bench for the Lady Buckeyes, and Tate and Morton each added 6 points. Tate had five steals, and Abbey Bradshaw grabbed nine boards — eight in the first half.

Lindale was unable to get shots to fall early in the contest. Brooke Everest made two of her four attempts in the first quarter, but the rest of the Lady Eagles were 0-for-12 from the field in the opening eight minutes. Shelbi Steen knocked down a free throw in the final minute, but Gilmer held an 11-5 lead after the first quarter.

After Gilmer stretched its lead to 16-5, Chamberlain got a steal and assisted an Everest layup with 4:44 left in the half. Gilmer led 20-9 when the Lady Eagles got their first bucket from someone other than Everest as Steen scored inside. Chamberlain then had a layup to make the score 20-11. Bradshaw hit two free throws in the final minute to give Gilmer a 22-11 halftime lead.

Lindale was 0-for-13 from 3-point range in the first half, and Gilmer was 0-for-5 from deep in that span.

The first points of the second half came nearly three minutes in as Jordan knocked down a three from near the top of the key. Everest answered with a layup for Lindale on a long pass by Chamberlain.

With Gilmer leading 27-13, Brenley Philen had a putback, and Steen was fouled on a three and made all of the free throws to trim the deficit to nine, 27-18.

After Addison Walker connected from downtown for Gilmer with 59 seconds on the clock, Philen scored in the lane, and Chamberlain made a layup just before the buzzer to cut the score to 30-22 heading into the fourth quarter.

Everest opened the fourth quarter with a steal and layup before assisting on Chamberlain’s triple that ended an 0-for-19 drought on 3-point attempts for the Lady Eagles.

“We were definitely out of sync at the beginning of this game,” Lindale head coach Daniel Devisscher said. “That kind of threw us off. The ball just didn’t go in. I’m just proud of the way the girls continued to fight and give us a chance, but we still struggled to put the ball in the hoop. The defense was there. Our offense was not.”

Everest led Lindale (24-5) with 10 points, and she had six steals — five in the fourth quarter. Chamberlain had 7 points and also recorded six steals. Steen finished with 6 points, 12 rebounds, four blocks and four steals.

“I am proud of this group of seniors,” Devisscher said. “I wish they were juniors.”

Gilmer (24-2) advances to face either No. 12 Midlothian Heritage or Melissa.