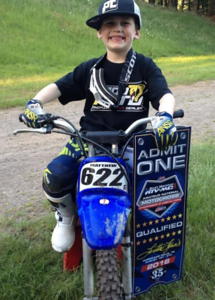 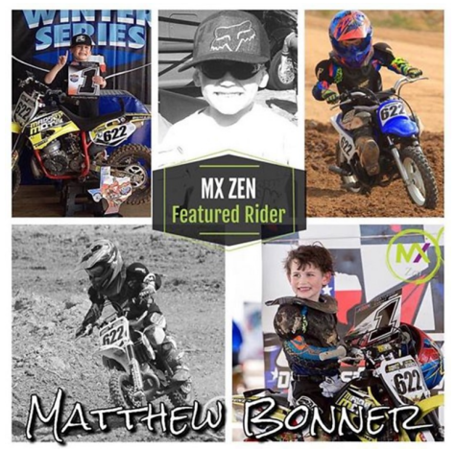 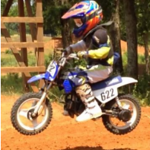 The event is scheduled for August at the historic Loretta Lynn Ranch in Hurricane Mills, Tennessee.

The young Bonner took on over 22,000 hopefuls from across America to earn one of the 1,482 qualifying positions.

"The Amateur National at Loretta Lynn's is the event every motocross racer in the country wants to compete in," Tim Cotter, event director, said. "A win at Loretta's gives a racer instant national notoriety and can serve as a springboard to a lucrative professional motocross career."

Matthew will make the journey to Tennessee, along with his biggest fans - his family. The race runs Aug. 1 to 6. He has spent the last four months qualifying for the event. The top finishers in area qualifiers and regional championships earn a gate position in the national championship race at Loretta Lynn's. In total, there are 38 different classes of competition.

After having taken a qualifying journey that saw him compete in six states, Matthew will compete as a 5-year-old (age as of Jan. 1) alongside 29 of the fastest 4 to 6 year olds in the highly competitive 50cc shaft drive class.

The track is built on the Loretta Lynn Ranch and Campground in Hurricane Mills. The course contains a variety of jumps, corners and other obstacles designed to test the skills and stamina of the racers. The motocross track is used only once a year for motorcycles, so there is no hometown advantage. Racers compete in three 15- to 20-minute races over the course of the week per class, sometimes in grueling temperatures. Proper training and preparation are paramount.

Matthew, who will start kindergarten in the fall, has been riding dirt bikes since he was 3 and started racing at age 4. With the generous help of sponsors, Matthew will have the opportunity to pursue his dreams.

He has raced many events in the last two years and competes nearly every weekend at many surrounding tracks, including Swan MX Raceway Park near Tyler.

He got into motocross because his family loves motorcycles. His dad and uncle used to race.

"My family inspires me the most because they love me and encourage me to be my best and have fun," the youngster said. "I think it's so cool to go to nationals in Tennessee, and this year I will be chasing after a national title at Loretta Lynn's Ranch."

Matthew's mother, Kari, added, "No journey of this size can be made without support. As such, we are looking for sponsors who would like to contribute to support Matthew's journey. You will be recognized on our team shirt and on all social media and press contributions that involve Matthew. Any amount or gift is a blessing to him. Thank you in advance, and we appreciate you for considering contributing."

For more information, contact the Bonner family at 903-780-0074 or email JBMotorsportstx@gmail.com