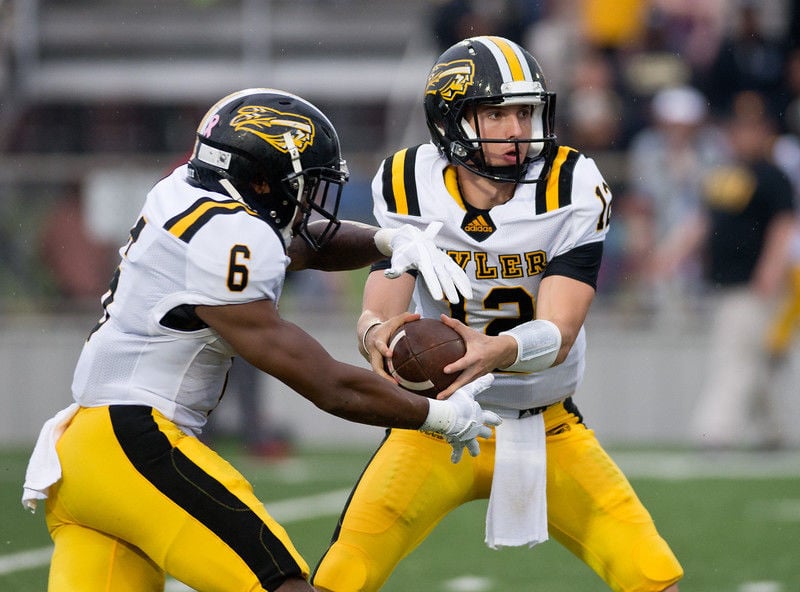 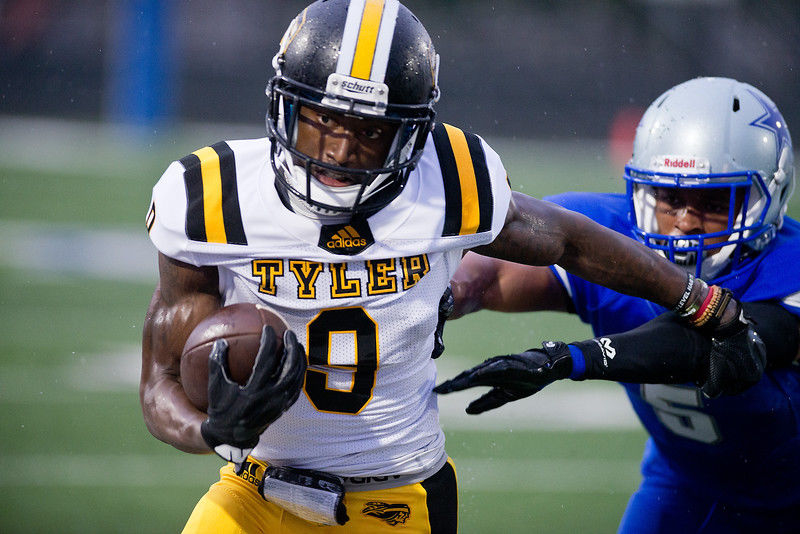 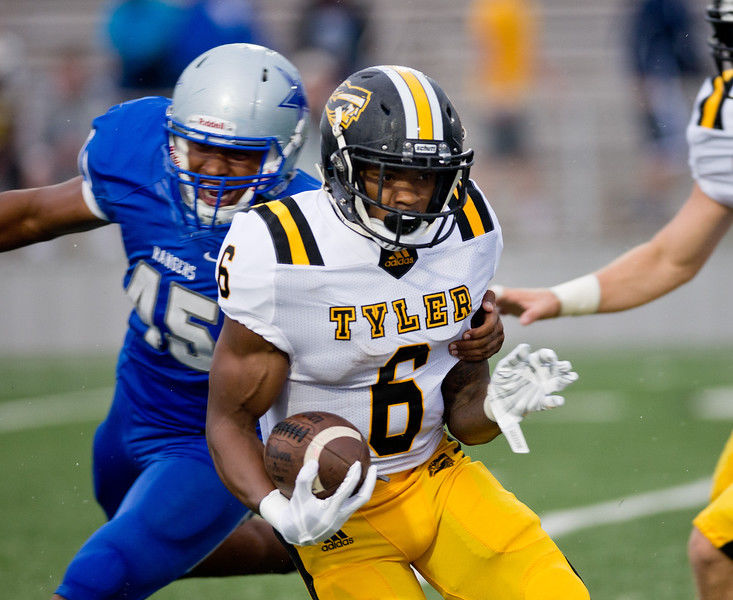 KILGORE — TJC went old school in Saturday's football opener on a rainy night in the heart of the East Texas oil belt.

The No. 16 Apaches used a powerful offensive line, a stable of running backs and a stingy defense en route to a 22-8 victory over rival Kilgore College before about 4,000 fans at R.E. St. John Memorial Stadium.

Tyler Junior College coach Danny Palmer said his defense would be better this year, and if the first game is any indication, he is correct. The Apaches, led by two fumble recoveries by Ethan Rose, limited the Rangers to 239 yards of total offense.

"That was one of the best defensive performances since I've been here," said Palmer, who is entering his 11th season as chief of the Apaches. "I remember against Navarro in 2013 (17-10 Tyler win) we played good defense, but I think this was the best."

On the offensive side, the Apaches used a ground-oriented attack for 285 yards rushing, paced by JT Smith's 107 yards on 14 attempts. Shannon Vaughns added 85 yards while former John Tyler standout Jeremy Wilson, who was key on the clinching TD drive, contributed 67 yards and a 20-yard touchdowns dash. Logan Fuller, of Athens, added 27 yards on five attempts.

"I was really pleased with the poise of both Brennen Wooten and Nicholas Gerber at quarterback in rainy conditions," Palmer said. "We didn't take advantage of some early turnovers, but in the fourth quarter when we needed a drive the offensive line took over."

The Apache defense added a safety when the ball slipped through the KC punter's hands for a safety for the first score of the season.

TJC led 8-0 at halftime and 15-0 in the third, but KC scored with 13:52 left in the game when De'Montre Tuggle dashed in from 7 yards. QB Roger McCuller, a freshman from Hallsville, had a two-point conversion pass to Jonathan Mackey to put the Rangers within 15-8.

The next drive the Apaches, under Gerber, marched 63 yards in nine plays for the game-clincher. Wilson, a transfer from Henderson State, carried the five plays while gaining 40 yards, including the 20-yard TD dash.

The Apaches are scheduled to meet Texas A&T, which is from the Houston area, on Thursday at Christus Trinity Mother Frances Rose Stadium. However, playing on Thursday is in doubt, said Palmer, who said thoughts from the Apache family were with the people in the Houston area that has been devastated by Tropical Storm Harvey. He said his daughter and her family are in League City, but they are safe.

Palmer said if the game is not played on Thursday, it could be played either Saturday, Sunday or Monday. The Apaches have a bye on Sept. 9. Texas A&T's game against Blinn in Brenham was cancelled on Saturday due to the hurricane and flooding.

Palmer said a decision should be made by Tuesday. Both Tyler high schools are out of town this weekend. Texas College is scheduled to play Lane College at noon Saturday at CTMF Rose Stadium.

SMOKE SIGNALS: Palmer is 9-2 in season openers for the Apaches. … Kilgore is off until Sept. 9, hosting Arkansas Baptist. … Two TJC players were ejected from the game – one for an unsportsmanlike foul and another for targeting. Palmer said both plays will be reviewed. If the penalties stand, both players will miss the next two games under junior college football rules. … Along with the two fumble recoveries by Rose, a sophomore defensive back from Lafayette, Louisiana, Glenn, the Apaches standout DB from Klein, added a fumble recovery.