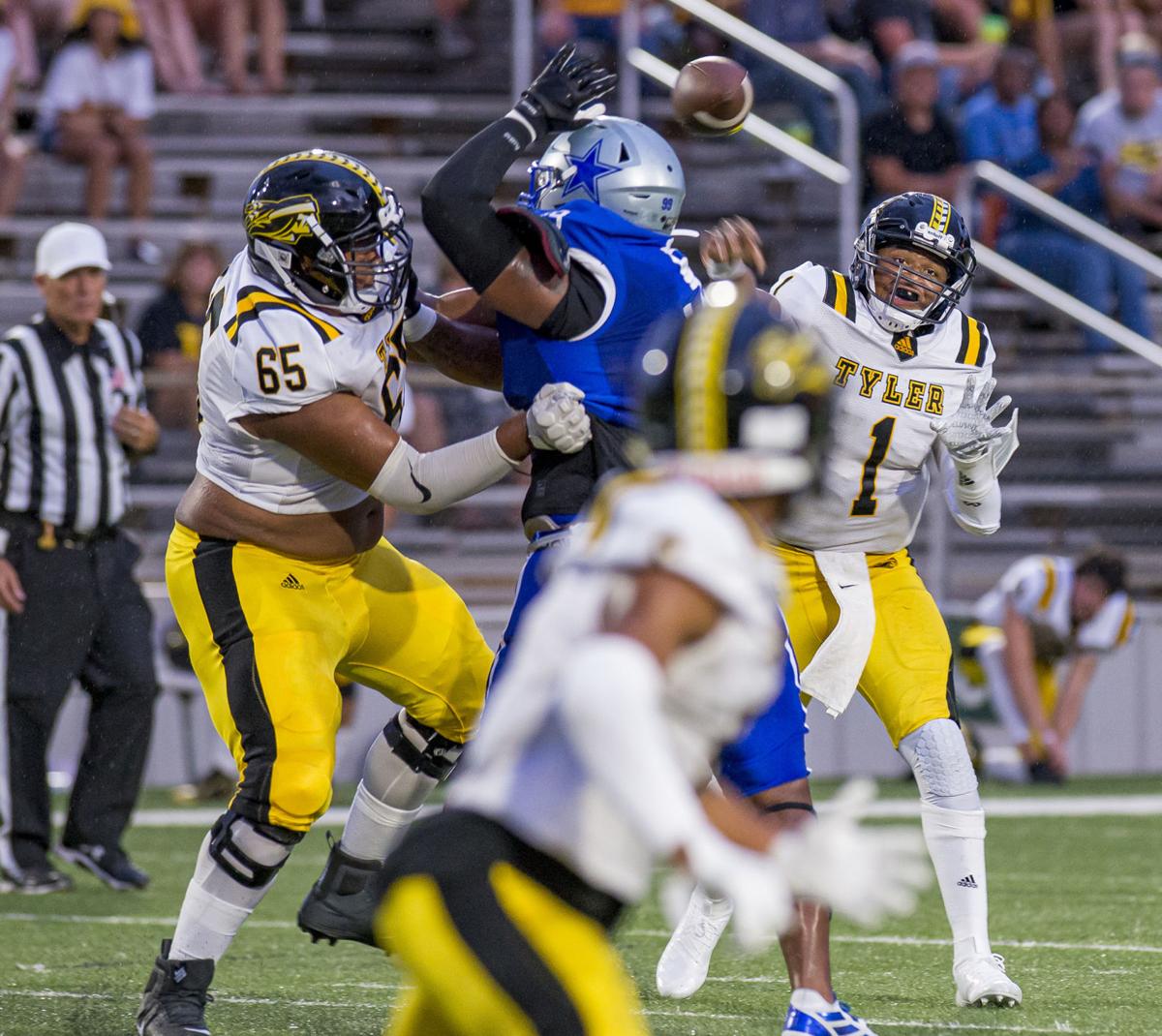 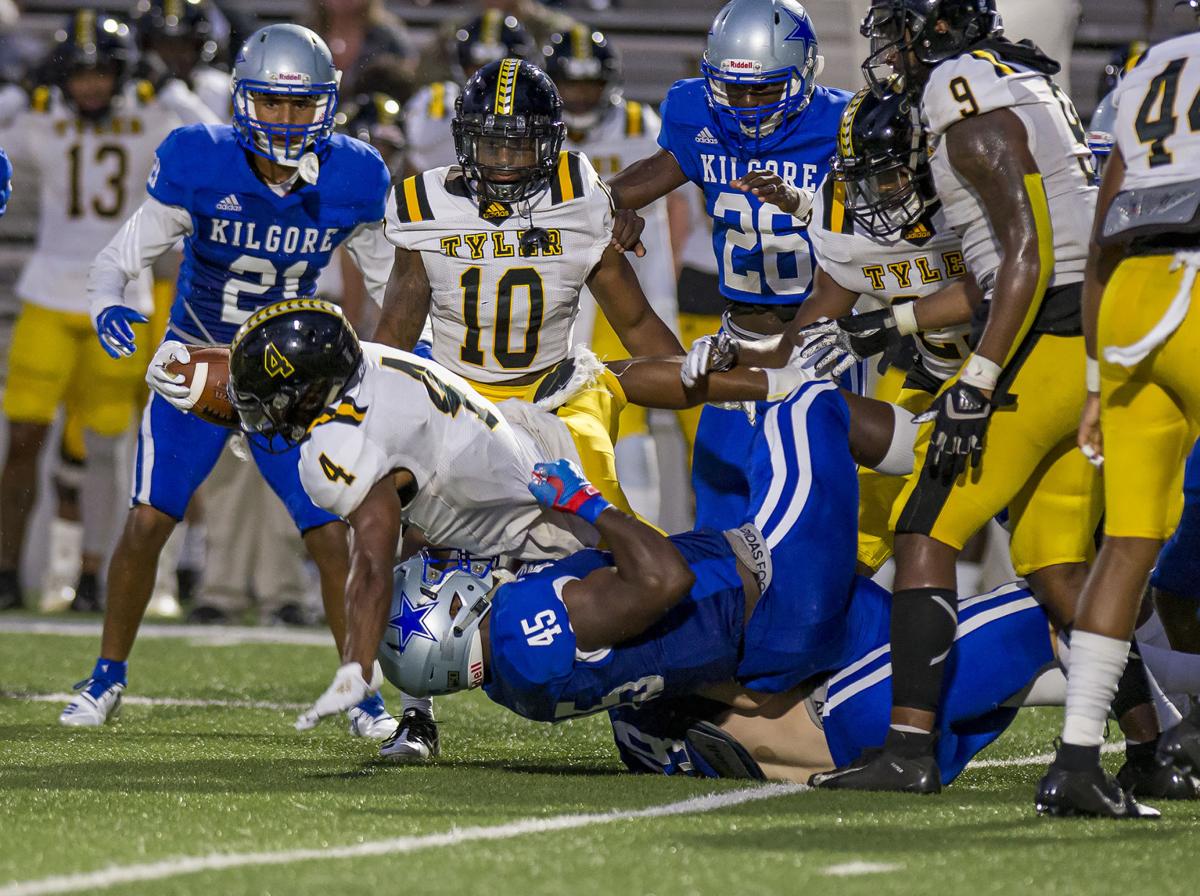 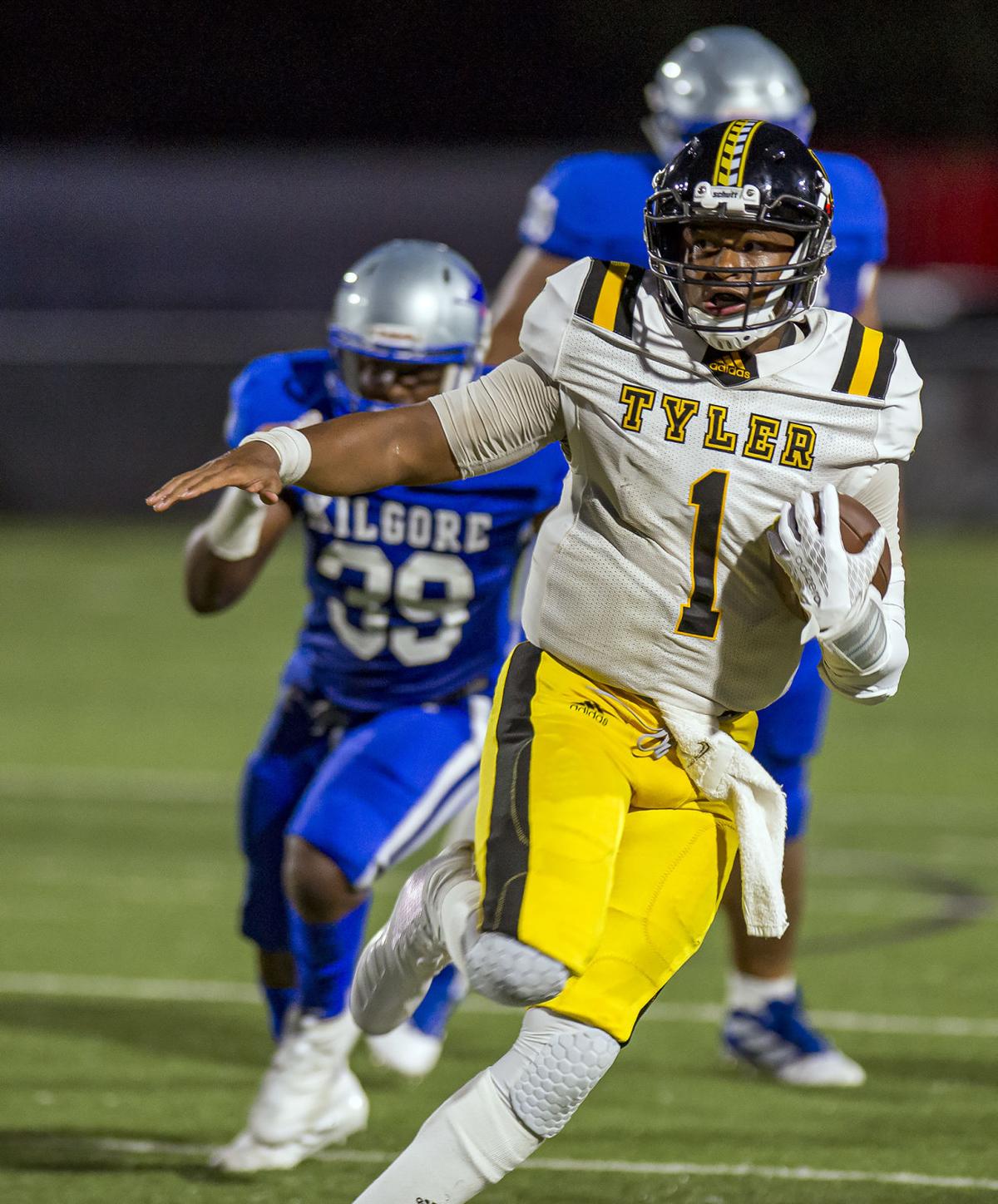 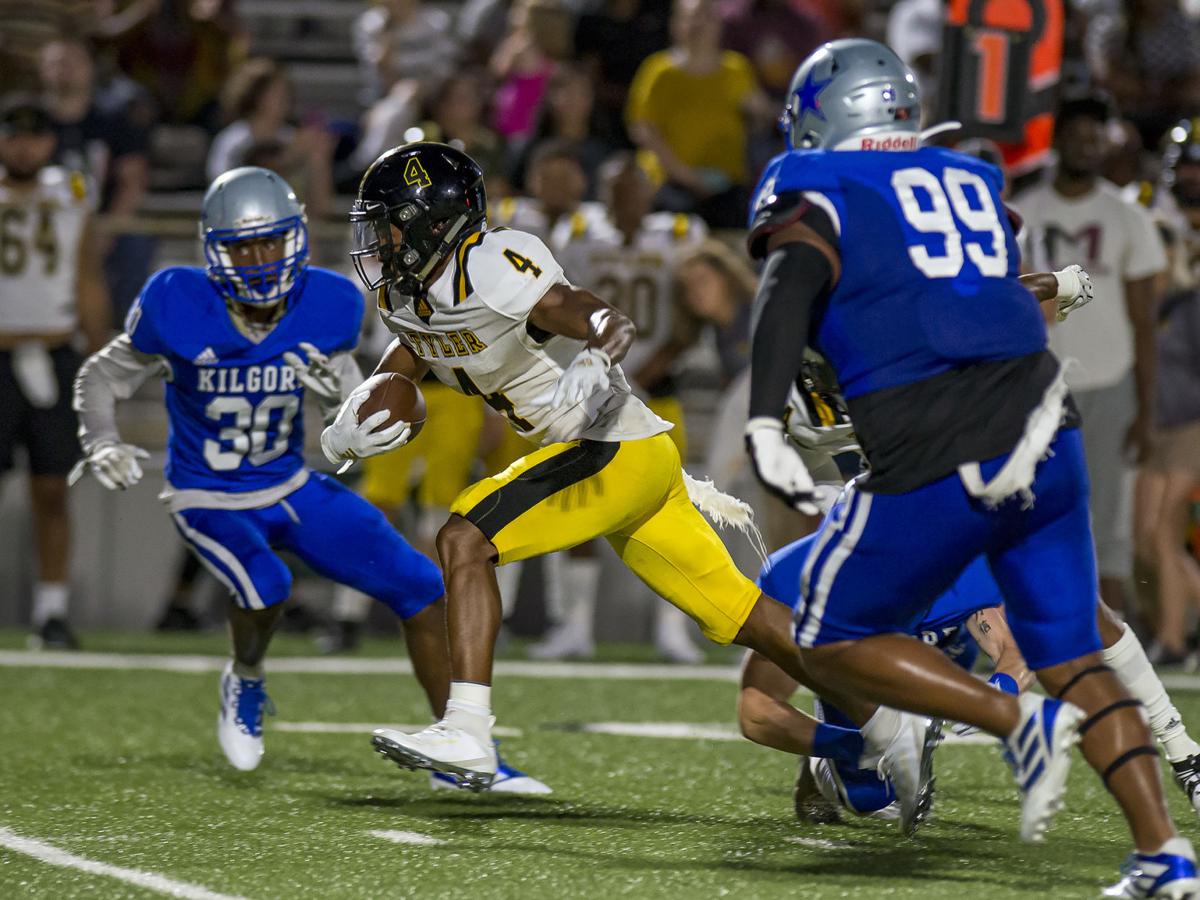 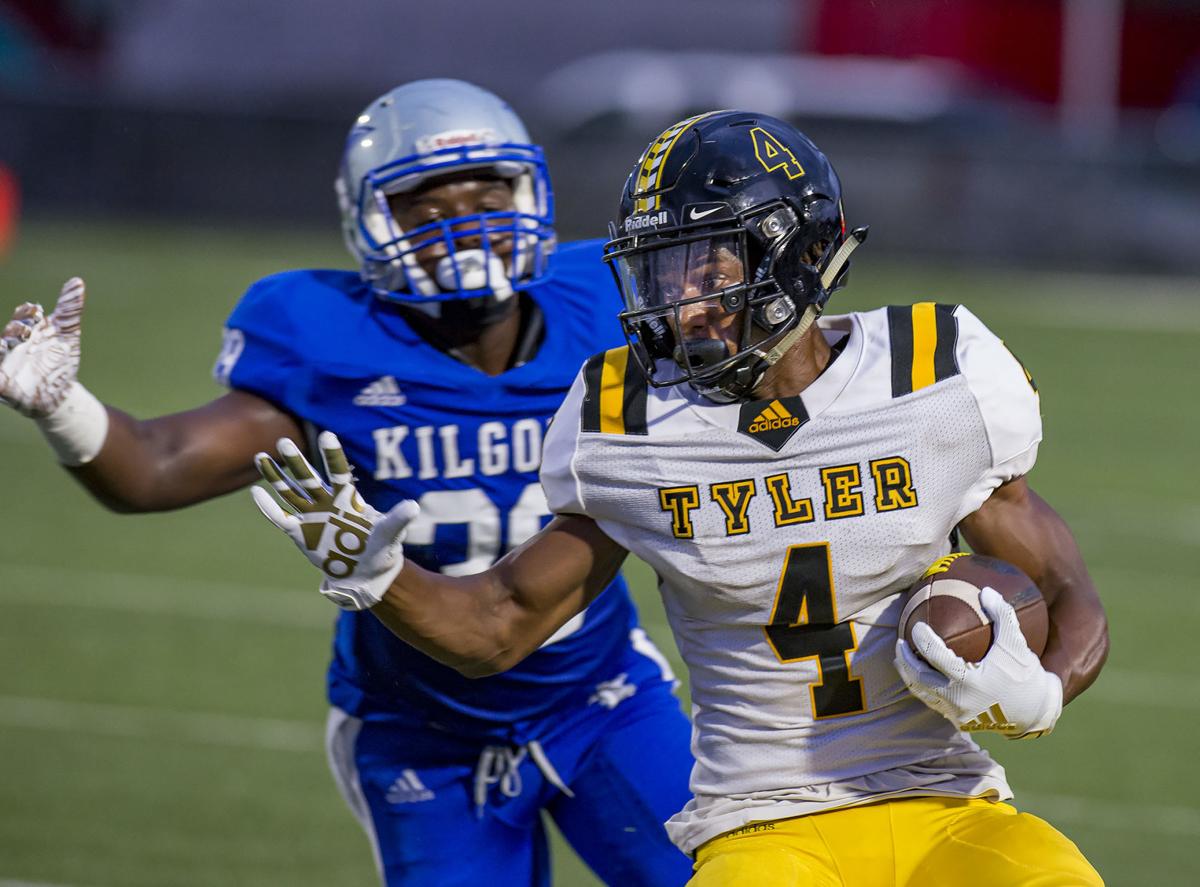 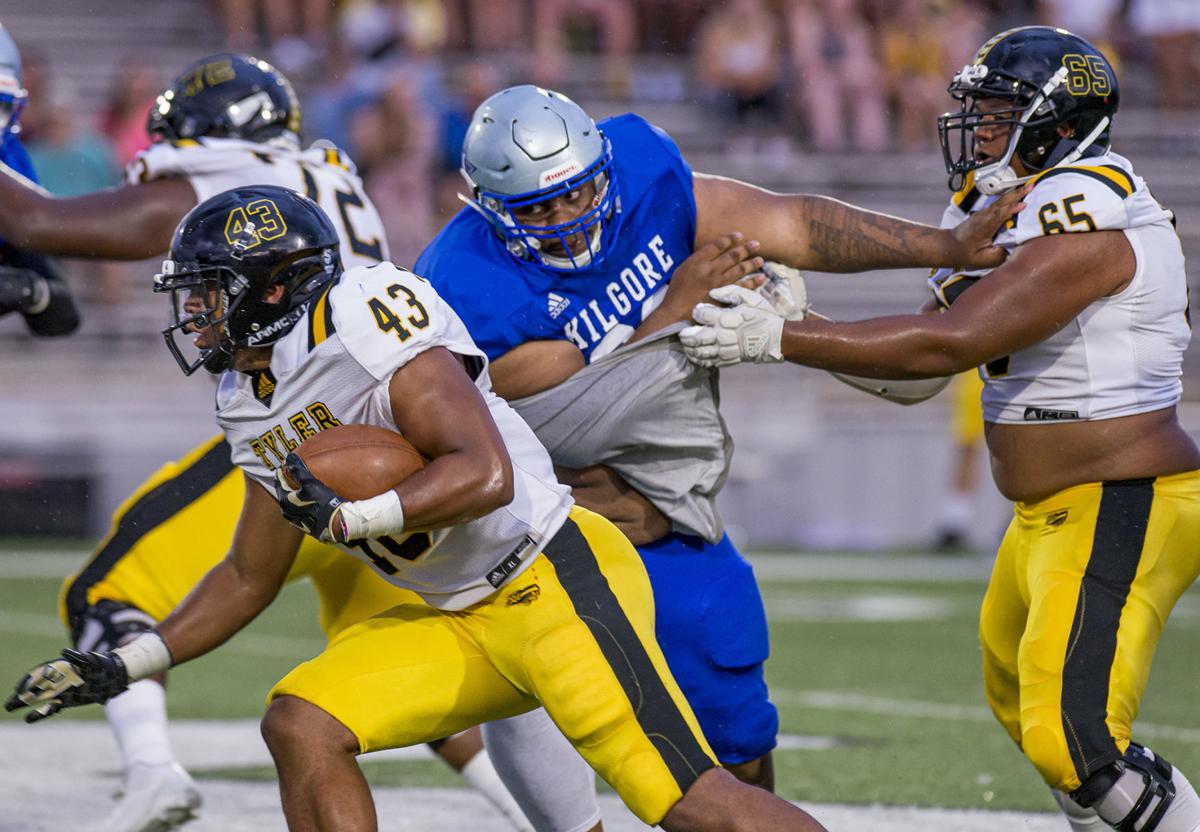 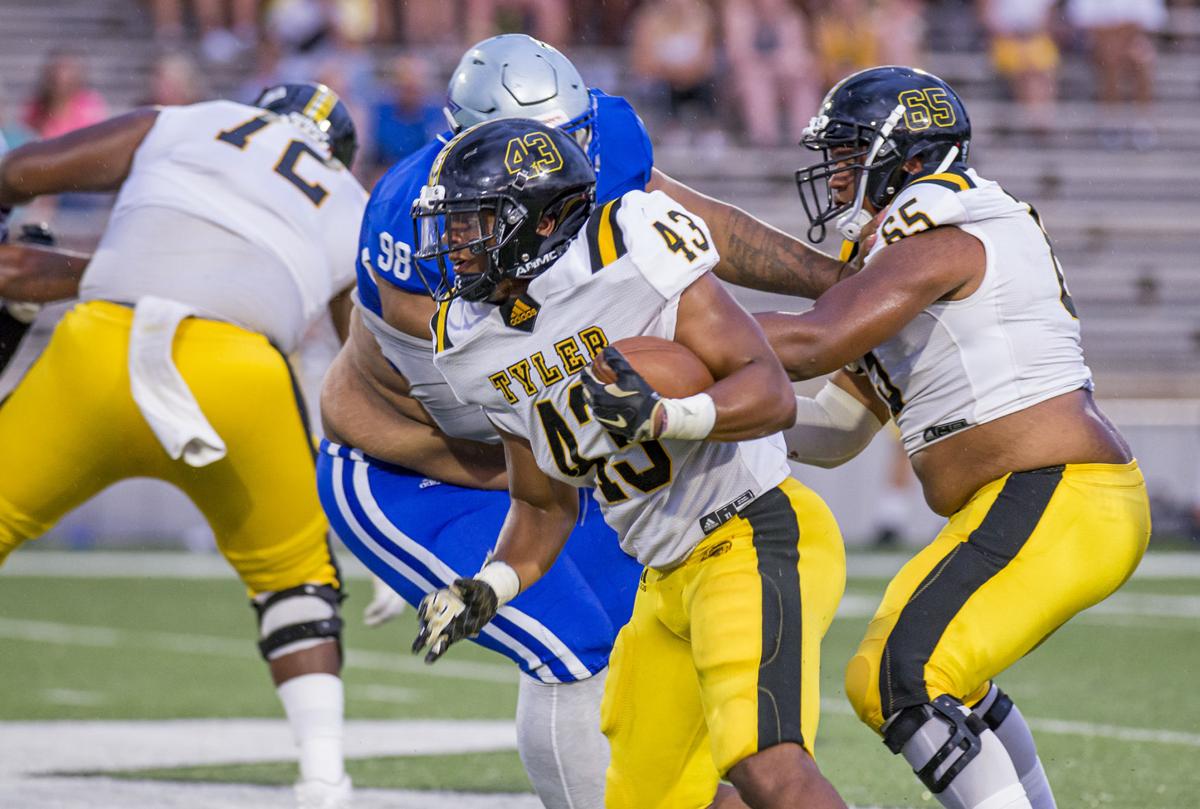 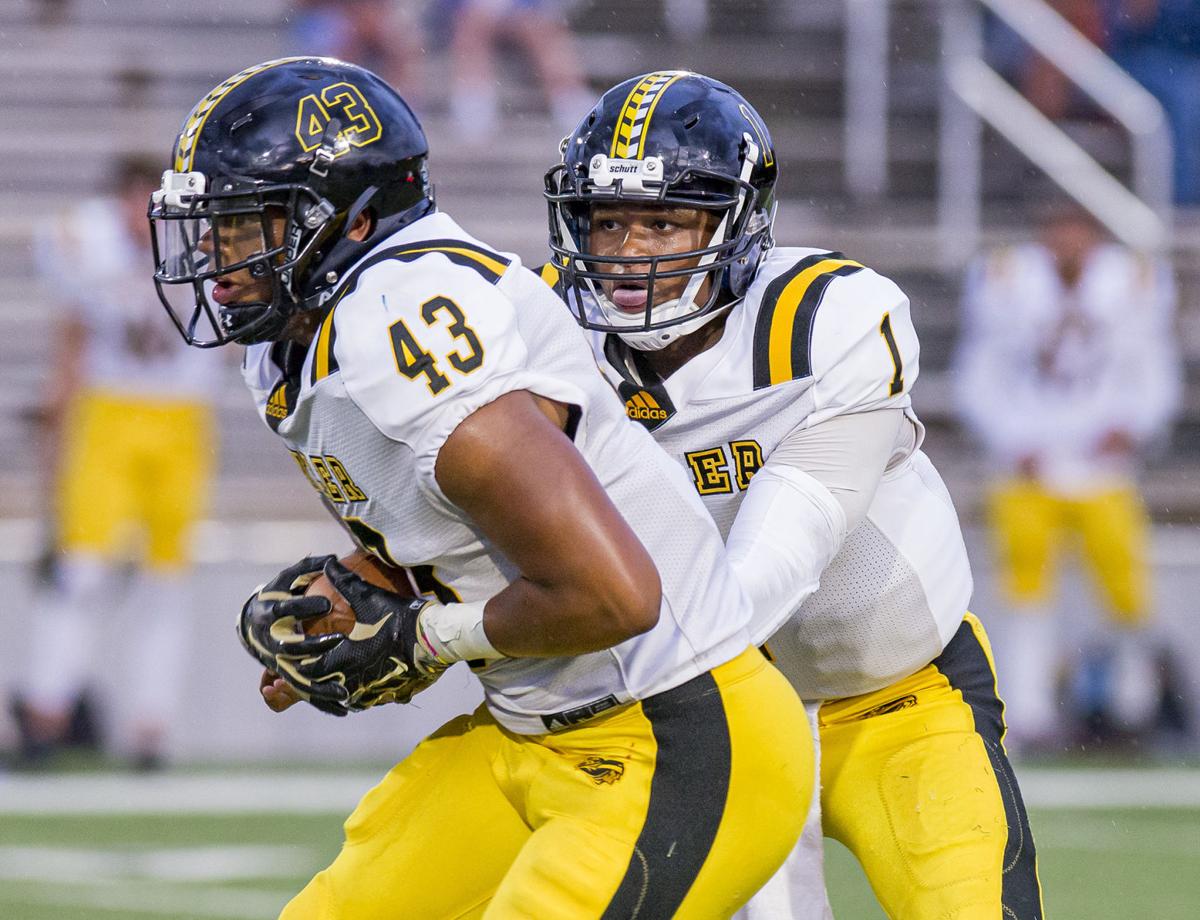 KILGORE — TJC grabbed the momentum in the third quarter with a recovery of an outside kick and 10 quick points, but Kilgore College dashed the Apaches’ hopes of a comeback.

Rangers quarterback Jacob Frazier and wide receiver Omar Manning were unstoppable as KC defeated Tyler Junior College 35-10 in the football opener for both teams on a sometimes rainy night before a nice crowd of 5,000 at R.E. St. John Memorial Stadium.

Manning, a sophomore from Lancaster, grabbed six passes, three of which were acrobatic catches, for 182 yards and two touchdowns. The Apaches had good coverage, but Manning put on a show. Frazier, a sophomore QB from Magnolia who was coming off a broken leg last year, connected on 16 of 23 passing attempts for 239 yards and four touchdown passes.

After falling behind 14-0 at halftime, thanks in part to an interception by Kilgore defender Geovante Howard that set up a Ranger TD with 1:00 showing before intermission, the Apaches surprised KC with an onside kick to begin the second half. Kicker Yovannie Garcia bounced the ball high off the turf and Collin Loftis caught the ball in mid-air for TJC at the KC 39.

Eight plays later, backup QB Nate Overholt, who came into the game the previous play when starter David Johnson had a leg cramp, scrambled 12 yards through the middle of the KC defense on third down and scored from the 12. Garcia’s PAT pulled TJC within 14-7 with 10:35 showing.

The Apache defense then forced a Ranger punt, that traveled 36 yards. TJC moved to the KC 22 before facing a fourth-and-2. Garcia came on and booted a 39-yard field goal and the Apaches pulled within 14-10 with 4:40 on the clock in the third.

On the ensuing kickoff, Loftis came through again and recovered a fumble at the 22. But three plays saw the Apaches lose three yards and Garcia’s field goal attempt from 42 yards was short.

The Rangers then took the momentum back in two plays as Kevon Latulas jetted 44 yards on a reverse, followed by Frazier hitting Gabe Douglas with a 31-yard TD pass. Luis Reyes’ PAT put the Rangers in control 21-10.

The Apaches rushed for 208 yards, but could only muster 67 yards passing. Kilgore totaled 425 yards.

Kilgore has now beaten TJC four straight and six of seven. The Rangers have won nine consecutive games, dating back to last season.

Tyler has the second of four straight road games to open the season when the Apaches travel to Brenham to meet Blinn Saturday, Aug. 31. Kickoff is scheduled for 7 p.m. The Rangers will be home that same night against Navarro College. Kickoff is 7 p.m. It is the Southwest Junior College Football Conference opener for both teams.