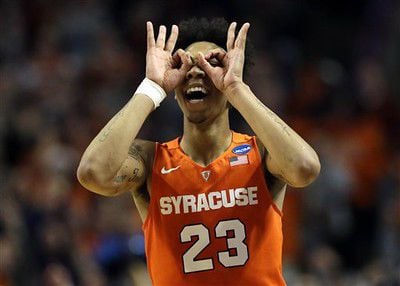 Syracuse's Malachi Richardson (23) celebrates after making three point basket during the second half of an NCAA college basketball game against Virginia in the regional finals of the NCAA Tournament, Sunday, March 27, 2016, in Chicago. Syracuse won 68-62. (AP Photo/Nam Y. Huh) 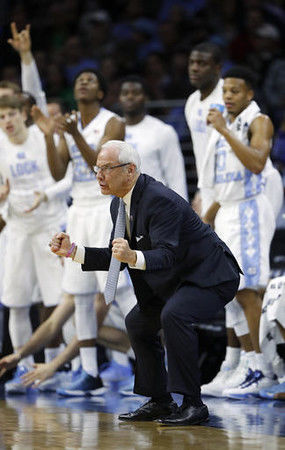 Syracuse's Malachi Richardson (23) celebrates after making three point basket during the second half of an NCAA college basketball game against Virginia in the regional finals of the NCAA Tournament, Sunday, March 27, 2016, in Chicago. Syracuse won 68-62. (AP Photo/Nam Y. Huh)

When the word "Syracuse" popped up on the bracket for the first time, most of the so-called experts were crying "foul," not shouting "Final Four."

So much for that.

Coach Jim Boeheim's "I Told You So" tour will travel all the way to Houston. The 10th-seeded Orange became only the fourth double-digit seed to make the Final Four. They aren't the only surprise out of Syracuse. The Orange women's team also shocked the basketball world by advancing to their first Final Four, though the ladies were a four seed.

They'll be joined by a blue blood (North Carolina), a scrappy squad with no stars (Villanova) and the team with the tournament's best player in Buddy Hield (Oklahoma).

Though it's been hard to find many genuine surprises in this, a season full of unpredictable twists and turns, Syracuse making the Final Four would certainly fit that category. This was a program under duress, one that lost Boeheim for nine games early this season while he served punishment for NCAA violations.

This was a program that gave St. John's one of its eight wins this season; a program that dropped five of six heading into Selection Sunday. Hardly any bracketologist had the Orange making it into the field of 68. The NCAA selection committee didn't agree. And shortly after Syracuse beat Dayton 70-51 in the first round, Boeheim was at his cranky best, saying, anybody "that said we didn't deserve to be in obviously doesn't know anything about basketball."

Syracuse trailed Virginia by as many as 16 before Boeheim switched out of his trademark 2-3 zone and into a full-court press. That helped the Orange outscore the Cavaliers 29-8 down the stretch to win 68-62.

"We had a lot of doubters," freshman Tyler Lydon said. "A lot of people who believed we shouldn't even be in this tournament. I'm sure there are still a lot of people who think that. But we know what we can do as a team and that's all that matters."

The first semifinal pits Oklahoma against Villanova. Oklahoma won a meeting in December, 78-55.

A quick look at the teams and their roads to the Final Four:

The Coach: Lifer Lon Kruger is back in the Final Four for the first time since he took Florida in 1994.

The Star: That would be Hield - aka "Buddy Buckets" - who averages 25.4 points a game and cracked 35 twice in the four tournament games.

The Story: The Sooners were ranked No. 1 in February before losing three of four. Another loss, in January, was a triple-overtime setback to Kansas in the best college basketball game of the year.

The Coach: Jay Wright, who led a turnaround at Hofstra before getting the Villanova job in 2001. He has taken the Wildcats to the tournament 11 of the last 12 seasons.

The Star: The stat sheet says there isn't one. But let's go with senior guard Ryan Arcidiacono, a 12-point-per-game scorer who celebrated his 22nd birthday by making four clutch free throws to seal Saturday's win over Kansas.

The Story: Seeded 1 or 2 the two years before this, the Wildcats didn't make it out of the first weekend either season. Now, they're back at the Final Four for the first time since 2009.

The Coach: Jim Boeheim, in his fifth Final Four. Served a nine-game suspension for NCAA violations.

The Star: Michael Gbinije leads the team at 17.6 points a game. But the star, really, is that ultra-nuanced 2-3 zone that Boeheim wins with in an era in which most sought-after recruits have zero interest in those kind of details.

The Story: So many to choose from, most centered around this team's ability to get to the Final Four when nobody gave it a chance.

The Coach: Roy Williams, now taking the Tar Heels to the Final Four for the fourth time, to match the number of times he reached it with Kansas.

The Story: Only No. 1 seed to make the Final Four. The program is in its record 19th Final Four, but first since 2009. No surprise considering the Tar Heels won the ACC regular-season and tournament titles, and that conference had four teams in the Elite Eight.