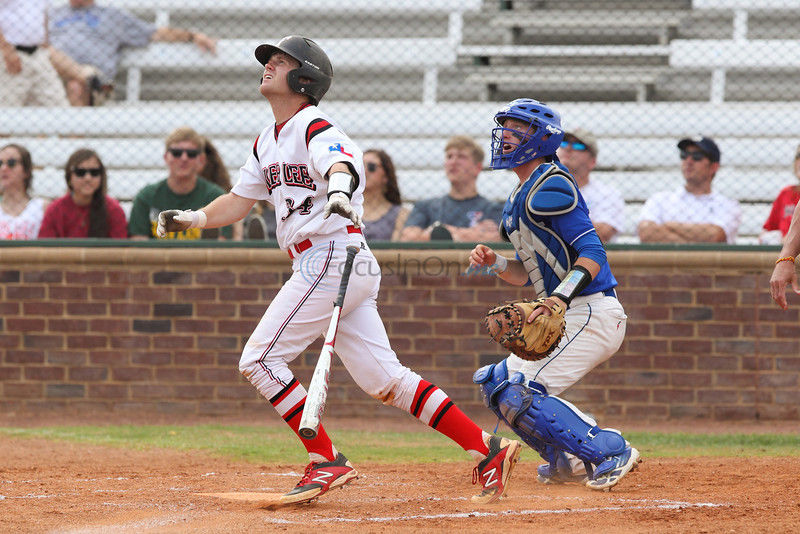 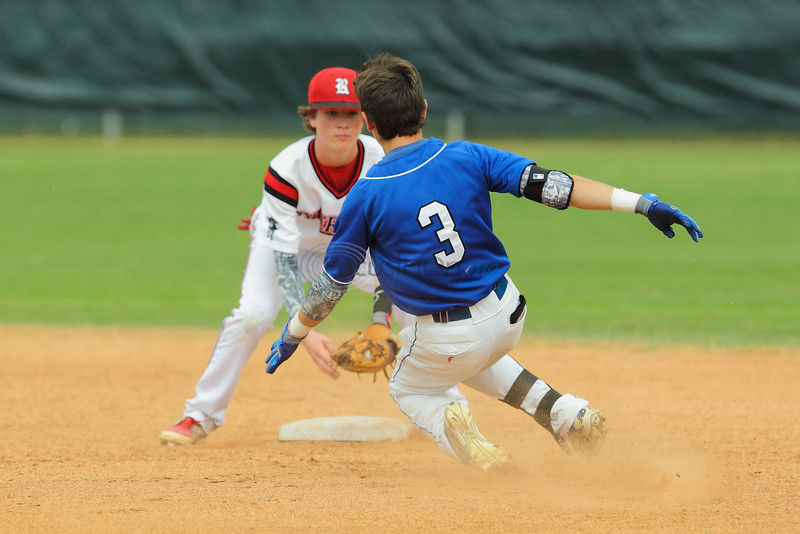 Robert E. Lee shortstop Parker Bramlett puts the tag down on North Mesquite's Tyler Starks for the out in the third inning of Saturday's game at Mike Carter Field. (Lang White | Correspondent)

Robert E. Lee shortstop Parker Bramlett puts the tag down on North Mesquite's Tyler Starks for the out in the third inning of Saturday's game at Mike Carter Field. (Lang White | Correspondent)

Robert E. Lee needed five innings to settle the question of who deserved third place in District 12-5A baseball.

The Red Raiders rocked North Mesquite for 10 runs on 14 hits in a 10-0 win Saturday afternoon in their district third place game at Mike Carter Field.

The game was halted in the fifth inning due to the 10-run rule.

The victory means Lee (14-12) now faces Rowlett, the second-place finisher in 11-5A, next week in a bi-district best-of-three series.

Game 1 is scheduled for 7 p.m. Thursday at Mike Carter Field, while Rowlett will host at 5 p.m. Friday. If a third game is needed it will be played at 1 p.m. Saturday at a location to be determined.

North Mesquite (13-14), which defeated Mesquite Horn on Friday night to set up the district-seeding playoff, will face 11-5A champion Garland Sachse next week in bi-district.

It was the second time in five days for REL to romp over an opponent in a clinching victory. On Tuesday, the Red Raiders routed Longview 13-1 in five innings to clinch a playoff spot.

"The kids came out today and responded really well," REL coach David Howard said. "The way we've played in the second half of district with five wins in our last six games, that's a pretty good (momentum) heading into a playoff run."

Daniel Bogue went five innings for the victory, allowing just two hits. The junior lefty got out of a bases-loaded one out situation in the first and overcame a leadoff double in the second.

Every player in Lee's starting lineup reached base and/or registered at least one hit in the contest.

Senior infielder Chandler Hill was 2 for 4 with an RBI, Tyler Jones singled twice, Jacob Kuehn had three singles, Parker Bates singled and doubled and Ryan Rendon doubled and drove in three runs, including the game clincher on a sacrifice fly.

"The past couple games we've gotten a lot better offensively," Hill said. "We are staying solid and working through the at-bat and not getting ourselves out."

A fielding error by Hill enabled North Mesquite to load the bases with one out in the top of the first. Cameron Henderson then hit a pop fly to right field and the Stallions tested Parker Bates' arm and lost with the North Mesquite runner thrown out at home to end the inning.

Lee loaded the bases in the second, but came away empty against North Mesquite starter Trevor Welton.

The Red Raiders got runners in scoring position again in the third, but this time cashed in, thanks to an RBI double by Hill. That started a four-run inning with Lee sending 10 batters to the plate.

REL did not let up in the fourth, highlighted by Rendon's two-run double to push its lead to 7-0.

The Red Raiders ended the contest in the fifth with the first four batters reaching on hits, highlighted by a two-run double from Bates. All that was needed then was the game-clincher and Rendon provided it, lifting a ball high enough to score Bates on a game-winning sacrifice fly.