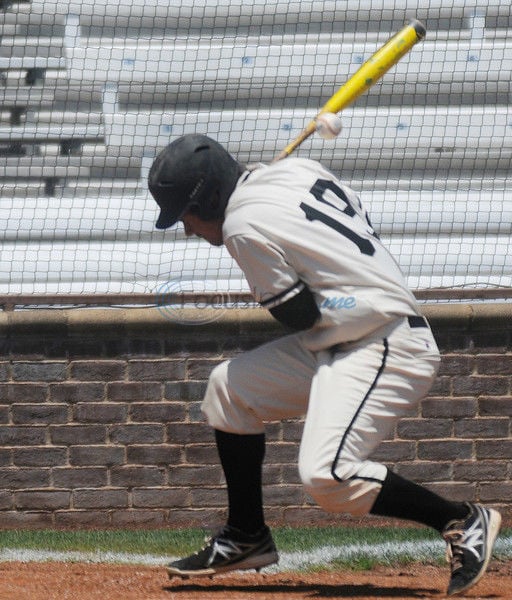 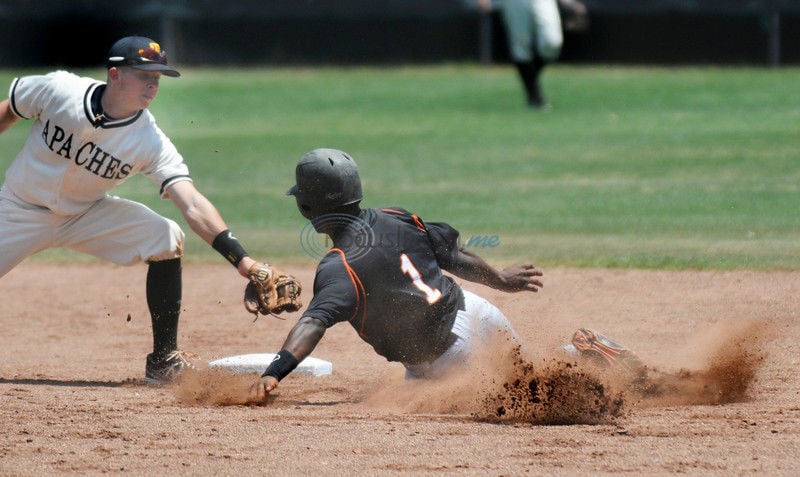 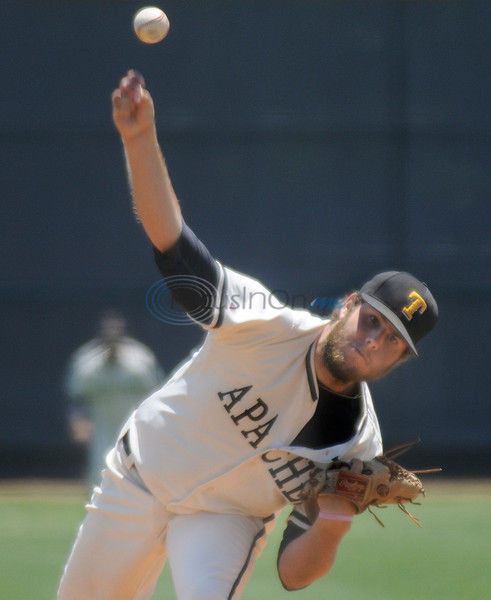 Tyler Junior College pitcher Jacob French throws to the plate against Cedar Valley on Saturday afternoon at Mike Carter Field. He had a no hitter through 6 innings. (Herb Nygren Jr. | Tyler Morning Telegraph)

Tyler Junior College pitcher Jacob French throws to the plate against Cedar Valley on Saturday afternoon at Mike Carter Field. He had a no hitter through 6 innings. (Herb Nygren Jr. | Tyler Morning Telegraph)

The Tyler Junior College Apaches rode the arm of Jacob French’s near no-hitter to advance to the District C Tournament next week in McKinney.

Tyler scored five runs in the top of the seventh inning en route to defeating Cedar Valley 5-0 and thus clinching the best-of-three Metro Athletic Conference Play-In series on Saturday at Mike Carter Field. The Apaches won the series 2-0 as they took Game 1, 5-4, in 12 innings Friday night.

No. 2 ranked Tyler (36-17) will be the No.3 seed in the double-elimination district tournament and will play No.2 seed North Lake College on Friday. The winner of the district tourney advances to the NJCAA World Series May 25-30 in Tyler.

French, who threw 125 pitches, no hit the Suns through 8 1/3 innings before giving up a hit to Cody Brown to right field.

“Jacob was nearly unhittable and that was exactly what we needed,” Tyler coach Doug Wren said. “He kept putting up zeros before we could break through with some runs in the seventh inning.”

With the run support, the Apaches looked to close it out.

The TJC defense answered the call for the first out of the ninth inning when shortstop Jacob Soisson charged the ground ball and played the short hop and threw to first just nipping speedy Devante Lacy. Brown followed with his hit and the Apaches replaced French, a sophomore from Kingwood, with Nick Johnson, who got the final two outs.

The only runs of the contest came in the seventh as the Apaches connected on three consecutive doubles by Kyle Sargent, Justin Monsour and Connor McMullin.

Sargent’s one-out double started the rally. Monsour laced a double to left center field to score Sargent and McMullin’s two-bagger down the left field line plated Monsour to give the Apaches a 2-0 lead.

“Sargent has provided a spark since we have inserted him into the lineup and he continues to grow at his position,” added Wren, whose Apache will try to repeat as District C champions.

The Suns brought Luis Davila-Rivera in to pitch and he proceeded to hit Anthony Soriano in the head to load the bases.

Back to back walks by Davila-Rivera forced Sutton and Stegent in and the Apaches led 5-0.

“We kept it clean on the defensive side until we could get some hits to fall in the seventh,” said Wren, whose team hit multiple line drives but seemed to go directly to Cedar Valley defenders during the series.

But pitching was the key to the victory with French, who will pitch for Tarleton State next fall. He set the Suns down in order five innings while striking out four.

McMullin had three hits for the Apaches

NEXT UP — Tyler vs. North Lake, Friday in NJCAA Regional District C Tournament at The Ballfields at Craig Ranch in McKinney. Cedar Valley season complete.