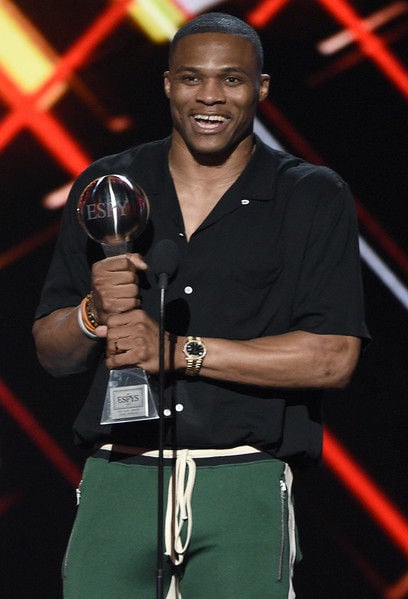 NBA basketball player Russell Westbrook, of the Oklahoma City Thunder, accepts the award for best male athlete at the ESPYS at the Microsoft Theater on Wednesday, July 12, 2017, in Los Angeles. (Photo by Chris Pizzello/Invision/AP) 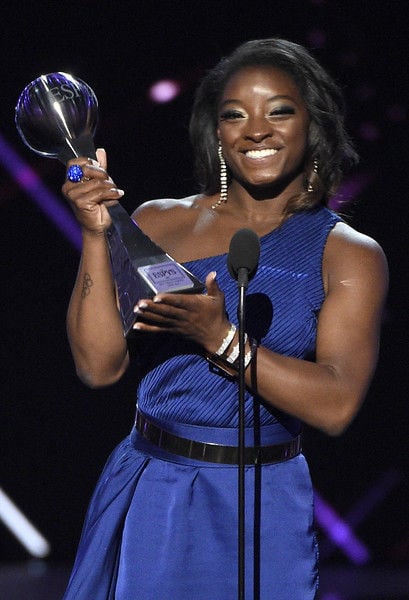 Gymnast Simone Biles accepts the award for best female athlete at the ESPYS at the Microsoft Theater on Wednesday, July 12, 2017, in Los Angeles. (Photo by Chris Pizzello/Invision/AP)

NBA basketball player Russell Westbrook, of the Oklahoma City Thunder, accepts the award for best male athlete at the ESPYS at the Microsoft Theater on Wednesday, July 12, 2017, in Los Angeles. (Photo by Chris Pizzello/Invision/AP)

Gymnast Simone Biles accepts the award for best female athlete at the ESPYS at the Microsoft Theater on Wednesday, July 12, 2017, in Los Angeles. (Photo by Chris Pizzello/Invision/AP)

The 25th annual show honoring the past year's top athletes and sports moments was hosted by Peyton Manning, who humorously mocked his reputation as a control freak and an overexposed commercial pitchman in the retired NFL quarterback's opening monologue.

Westbook was the NBA MVP, led the league in scoring and set a record for most triple-doubles in a season with 42. The Oklahoma City Thunder star won the trophy over Kris Bryant of the Chicago Cubs, Sidney Crosby of the Pittsburgh Penguins and Olympic swimmer Michael Phelps.

“It's been an unbelievable journey for me,” said Westbrook, a fashion fiend who adjusted his black shirt and green pants with wide white stripes before he spoke. “I want to make sure I look good first.”

Biles became the most decorated U.S. Olympic gymnast at the Rio de Janeiro Games, winning five medals, including four golds and a bronze. She beat out Olympic swimmer Katie Ledecky, WNBA star Candace Parker and Serena Williams for the honor.

“Ever since Rio it has been an amazing year,” Biles said. “I want to thank you all for believing in me.”

The biggest ovation of the night belonged to former first lady Michelle Obama, who posthumously honored Eunice Kennedy Shriver with the Arthur Ashe Courage Award for championing the rights and acceptance of people with intellectual disabilities through her founding of Special Olympics. Her son, Tim Shriver, accepted the trophy.

The Patriots and Falcons shared the best-game award for the Super Bowl, won in a furious comeback by New England.

Wearing a red party hat on top of a backward Cubs cap, Murray cracked, “One hundred eight years of waiting is hardly a moment. This is the culmination of 108 years of momentum by momentous men.”

The actor and comic plucked a bottle of champagne out of a mop bucket being pushed by retired Cubs catcher David Ross disguised as a janitor. Murray used a sword to open the bottle and took a swig. He gave presenter Nick Offerman a bottle to open with the sword, and the longtime Cubs fans toasted and drank.

Ross eventually shed his disguise and writhed on the stage mimicking moves from his “Dancing With the Stars” appearance. Ross opened his own champagne bottle with the sword and chugged as Cubs owner Tom Ricketts watched from the audience at Microsoft Theater. The trio then poured champagne on each other's heads.

“It was an unbelievable year,” Warriors guard Stephen Curry said. “A lot of noise and hype around it from the beginning of the year, but we tried to keep our head down and focus on the process. Hope to represent exactly what a team means.”

Actor Bryan Cranston presented the Icon Award to 89-year-old Vin Scully, who retired in October after a record 67 years broadcasting for the Dodgers.

“Hi everybody and a very pleasant good evening to you,” Scully said, drawing cheers at his signature greeting. “I hope you don't mind, but I wanted to hear it one more time.”

Comedian Jon Stewart gave the Pat Tillman Award for Service to Air Force Master Sgt. Israel Del Toro for his strength through adversity and continued service to his country.

The Jimmy V Award for Perseverance was given to 15-year-old New Orleans Saints superfan Jarrius “JJ” Robertson, who is fighting a rare and chronic liver disease.