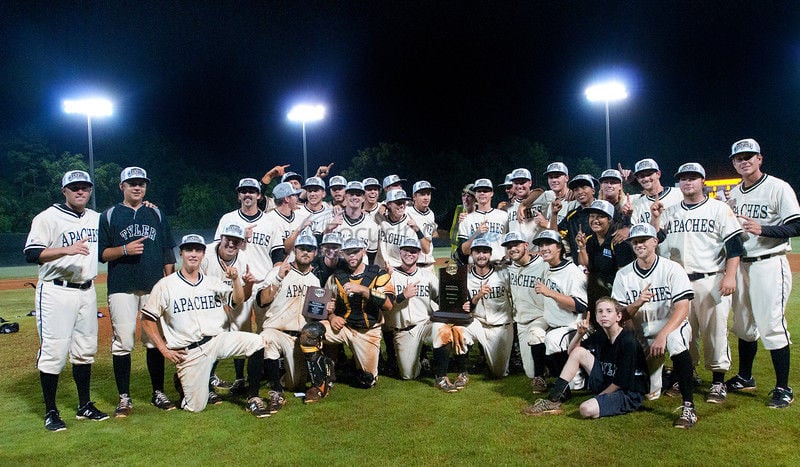 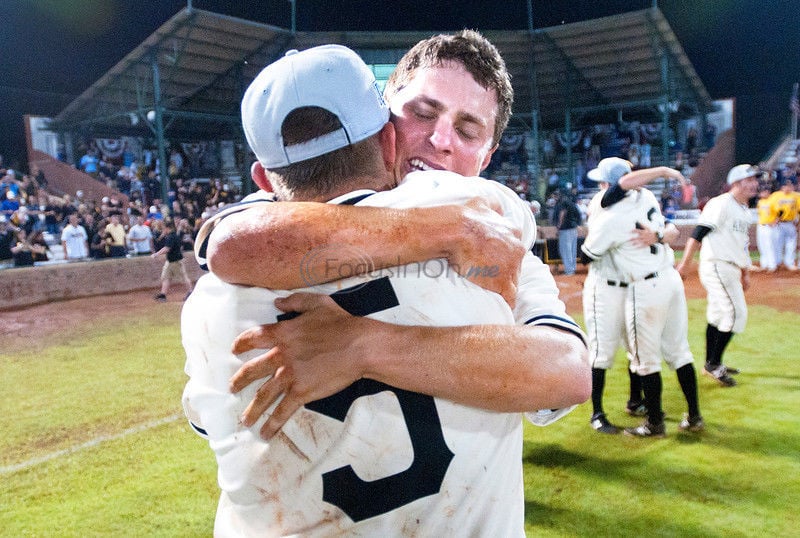 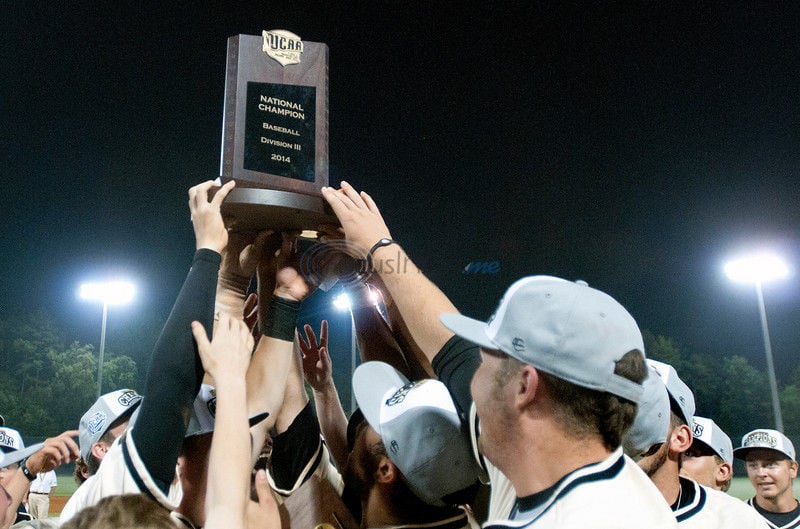 Not only did the Apaches win their second national baseball championship, but it was also the athletic program’s 50th national title.

TJC, behind the pitching of reliever Jarrett Dooley and triples from Zane Otten and Cody Broussard, scored a 6-3 win before a wildly enthusiastic crowd in the championship game of the NJCAA Division III World Series early Thursday morning at Mike Carter Field.

In a game that was delayed 2 hours and 28 minutes by rain, hundreds of fans stuck around for the contest that ended after midnight. More than 1,000 fans were on hand for the start and upwards of 800 were there to celebrate at the conclusion.

Before the tournament, TJC coach Doug Wren said he would love to bookend it with another title.

“This is so surreal,” said TJC’s Anthony Soriano, the tournament’s Most Valuable Player.

TJC coach Doug Wren was elated with the title. In 2010, the Apaches finished second and he felt much better this time.

“I’m just so proud of these guys and all the hard work they have put in — it makes it special,” said Wren, who was named Coach of the Tournament.

He noted “the good kids on the team. Combine good people with hard workers and baseball talent and this is what you get.”

Cumberland was making its first appearance in the World Series.

“We’re disappointed,” Dukes coach Keith Gorman said. “I told the guys don’t be ashamed of what you’ve done here. There is only one winner at the end and we got as close as we could get. Obviously it does not sit well with anyone. We felt like we were as good as anyone here, but we didn’t do it at the time when it was needed.

“Hats off to Tyler. They are a good ballclub and I’m happy for them and coach Wren.”

Broussard and shortstop Tim Hunter led the charge offensively for the Apaches. Broussard was 2 for 5 at the plate with a triple and two RBIs, while Hunter went 2 for 3 with a double, two runs scored and two RBIs of his own.

Dooley came into a tough situation with the bases loaded in the third inning for starter Eric Polivka. It was a tough start as the sophomore walked home Cody Stashak to give the Dukes a 2-1 lead.

However, Dooley pitched 5 1-3 innings, giving up just two hits to the Dukes.

Travis Johnson came on in the ninth to get the save and clinch the title.

Sophomore Soriano was named World Series MVP after going 7 for 15 at the plate with four RBIs during the tournament.

The Marucci Elite Hitter Award was presented to sophomore first baseman Eric Stegent, who went 8 for 17 with four doubles and five RBIs for Tyler.

They were joined by Dooley, Broussard and freshman center fielder Zane Otten on the all-tournament team.

Broussard, Otten, Soriano, Collin Lawrence and Hunter all had two hits for the Apaches. Broussard and Hunter had two RBIs each. Otten had a triple, while Lawrence had a double.

Earning all-tournament for the Dukes were Jordan Glover, Josh O’Neill and Anthony Lopez.

Glover led the Dukes with two hits, including a blast that hit the scoreboard for a homer.

Tyler went ahead 4-2 in the bottom of the fourth on Hunter’s RBI double to score Connor Wrye.

Cumberland led 1-0 in the bottom of the first when the rains came at 7:17 p.m. The Dukes took the lead on an RBI fielder’s choice by Jose Martinez that plated Anthony Lopez, who reached when he hit a shot off pitcher Polivka’s leg. Lopez went to third on Glover’s single.

After an out in the bottom of the first, Otten tripled to right. That shot must have brought the rain, because it started pouring.

Once the teams returned to play, Otten scored on an RBI single by Soriano.

It stayed 1-1 until the third.

The Dukes scored a run with four walks in the inning — three by Polivka and one by Dooley for a 2-1 lead.

It could have been more but Lopez was called out on batter’s interference for the second out.

The Apaches went on top in the bottom of the third.

After an out, Hunter, who made a nice play at shortstop in the first, walked. He motored around to score on Broussard’s triple past diving left fielder Gallagher. The ball rolled all the way to the wall.

Broussard then was awarded home when shortstop Lopez’s relay throw got past third baseman Justin Geri and bounded into the dugout. Thus, Tyler led 3-2.

NOTES: The 2015-17 tournament will be held in Kinston, North Carolina. Dr. Jon Groth, tournament official, said one reason for the switch is that six of the eight teams in this year’s tournament could take a bus to the Tar Heel state instead of flying.