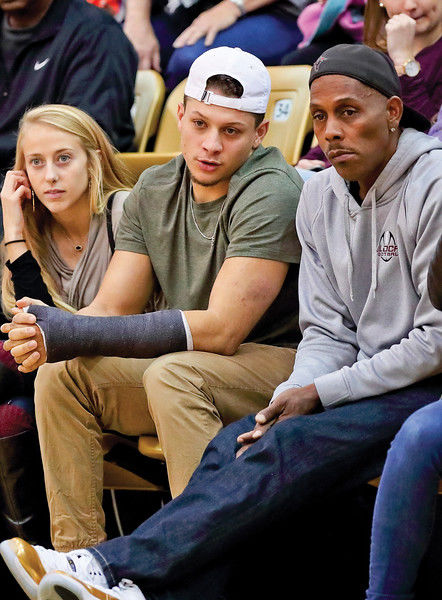 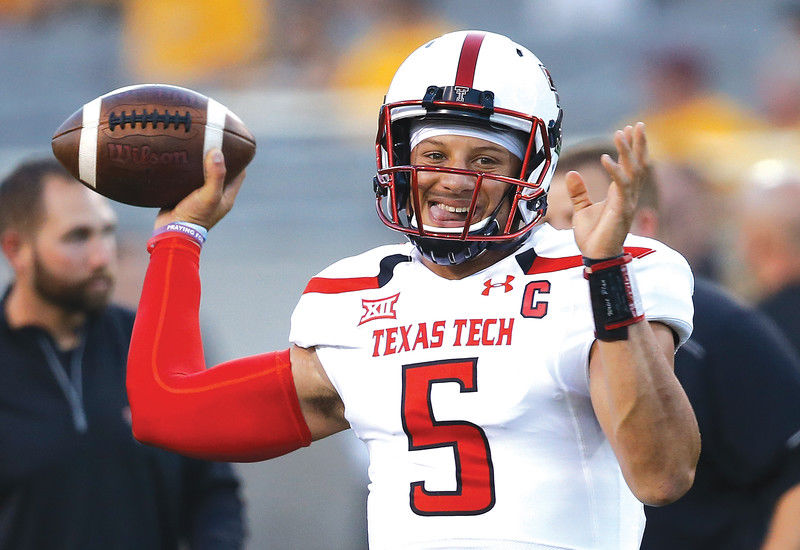 Patrick Mahomes II sat courtside for all three of Whitehouse's basketball games this week at the Wagstaff Holiday Classic held at Tyler Junior College. The Wildcats went 1-2 with Mahomes' younger brother, Jackson, the starting power forward for the team.

You'd never know in two weeks Mahomes faces one of the biggest decisions of his life.

The Whitehouse graduate just completed his junior season as starting quarterback at Texas Tech, producing another outstanding statistical campaign, completing 388 of 591 pass attempts for 5,052 yards and 41 touchdowns to go with 12 rushing scores.

Underclassmen have until Jan. 16 to file declaration papers with the NFL. The official list of underclassmen accepted by the league will be released Jan. 20.

While still donning a cast on his left arm from postseason wrist surgery to his left wrist, Mahomes said he has not decided yet whether he will return to Lubbock or hire an agent and make his plans to go to the NFL official.

"Right now I have just been trying to get healthy," Mahomes told the Tyler Morning Telegraph. "I get the cast off this week and will be able to start rehabbing and getting back to it.

"I am pretty much just seeing how I feel and haven't made a decision yet; just trying to enjoy time with the family right now."

While Mahomes will not say anything official, websites like WalterFootball.com believe that he will file for the NFL.

In a piece released Saturday by Charlie Campbell, WalterFootball.com's senior draft analyst, Campbell writes: "One playoff team told me they have a second-round grade on Mahomes and compare him to Derek Carr coming out of Fresno State. … There is love/hate with Mahomes in part because of his college offense, but Mahomes is an accurate passer with a good arm, bulk, flashes of field vision and mobility."

He is ranked as the No. 4 quarterback prospect, according to Sports Illustrated's rankings.

ESPN Football analyst Mel Kiper Jr. has Mahomes on his board as the No. 5 quarterback prospect. In a recent appearance on ESPN, Kiper said Mahomes could be a possible second-round pick.

"I don't see any quarterbacks going in the first round," Kiper said. "Right now there's going to be some intrigue with several. I think you have Patrick Mahomes from Texas Tech, who throws it all over the yard, but is the offense (he played in) going to allow him to come in and be a factor right away."

Mahomes delivered numerous showstopper performances in an otherwise disappointing season overall for Texas Tech, which finished 5-7 and did not go to a bowl game.

"The season did not go the way we wanted it to go, but we had a lot of close games that we lost and it easily could have went around the other way," Mahomes said. "I think we had four games that we lost by less than one score. We didn't finish out games and we need to get better at (that)."

One of those close losses came against eventual Big 12 champion Oklahoma in an offensive shootout that saw Mahomes and Sooners quarterback Baker Mayfield lead their respective teams to a combined 125 points in a 66-59 final score.

Mahomes set an NCAA record with 819 yards of offense to go with seven touchdowns and tied the NCAA passing mark with 734 yards.

"It was crazy, but that's the mindset I have every game," Mahomes said of the shootout with the Sooners. "To go out there and score every drive. Oklahoma has a great team, you could see it, and to be in a game like that you will always remember it."

Mahomes led the Red Raiders to the Texas Bowl as a sophomore after playing seven games in 2014 as a true freshman. His current career statistics stand at 11, 252 yards passing and 845 yards rushing with 93 passing touchdowns and 22 rushing scores.

Bobby Stroupe knows Mahomes well with the All-East Texas three-sport star making regular visits to Athletic Performance Enhancement Center (APEC), which he founded in Tyler with a new location now in Fort Worth.

Stroupe said Mahomes has already been in APEC Tyler a few times in December.

"He's a gamer. He competes. Whether he goes back to Tech next year or the NFL, people are going to look at that. No one is responsible for Pat's success more than Pat. He has put himself in position to truly consider coming out this year because he's one of the top quarterbacks in the country, period."