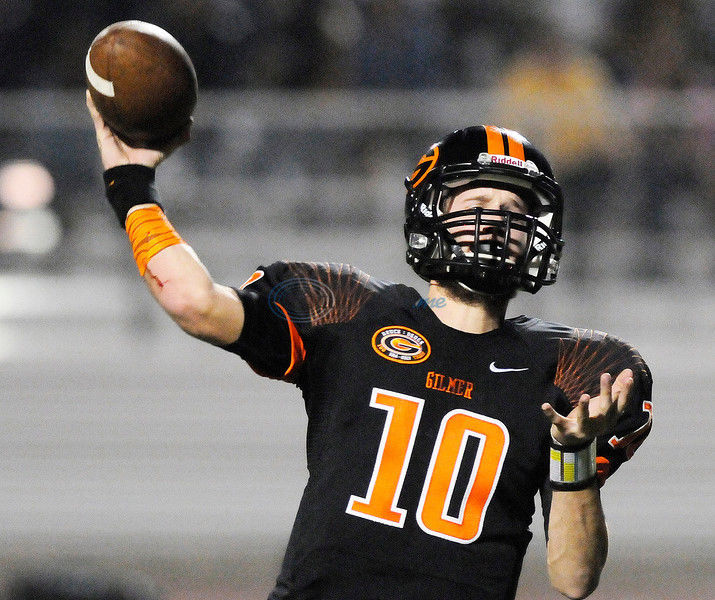 Gilmer's Tanner Barr throws downfield to lead the Buckeyes to a last minute touchdown in the first half in the area playoff game with Pittsburg at Pirate Stadium on Thursday night. (Herb Nygren Jr. | Tyler Morning Telegraph) 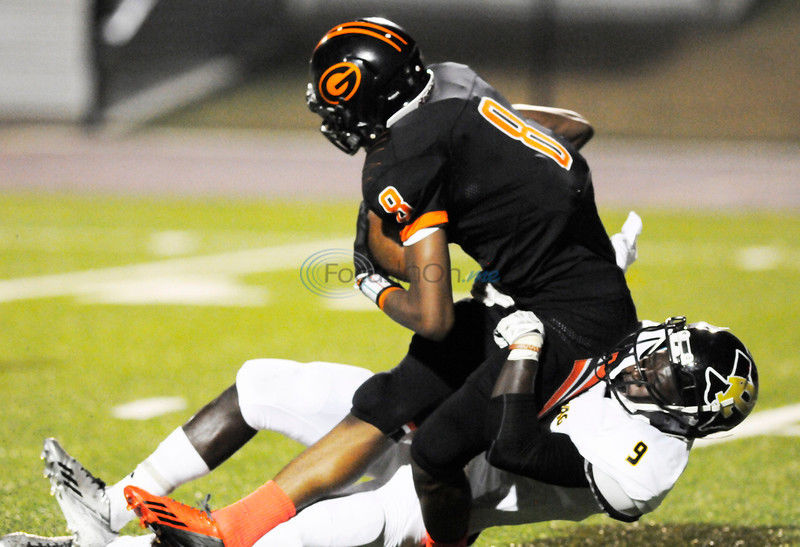 Gilmer's Tanner Barr throws downfield to lead the Buckeyes to a last minute touchdown in the first half in the area playoff game with Pittsburg at Pirate Stadium on Thursday night. (Herb Nygren Jr. | Tyler Morning Telegraph)

LONGVIEW — Like some law students, the Pittsburg Pirates were unable to pass the Barr on Thursday night, but Gilmer quarterback Tanner Barr did pass by the Pirates with proficiency.

Barr heaved three touchdowns and hoofed for another as Gilmer toted up its third shutout in its last four bouts, plundering Pittsburg 48-0 in a Class 3A Division II area tilt at Pine Tree’s Pirate Stadium.

The Buckeyes (11-1) will now face the victor of Friday’s Argyle-Melissa playoff. Pittsburg ended its campaign at 5-7.

Gilmer led only 7-0 at the first quarter’s conclusion, but the Buckeyes eventually rode Barr’s arm to a top-heavy triumph as he completed 13 of 22 for 168 yards, dispensing only one interception. In the meantime, Gilmer’s defense swarmed the Pirate offense.

Somewhat stymied on its opening two possessions, Gilmer abruptly planted Pittsburg with a big bang when DeVondrick Dixon returned a punt 42 yards for the game’s inaugural TD with 1:42 left in the first quarter. Dixon evaded a Pirate defender who was practically on top of him when he fielded the kick.

Gilmer wouldn’t rumble again for awhile, but in typical Buckeye fashion, once they began the Buckeyes produced points like a landslide.

Then late in the half, the Buckeyes doused the Jolly Roger boys again with another 77-yard TD trek in seven plays, overcoming two penalties in the process. Barr flung an 8-yard scoring sling to Desmond Pollard, who made a wow-what-a-catch reception in the end zone, sending Gilmer ahead 22-0 at halftime.

The Buckeyes sprang another score after a wild play on which Pittsburg fumbled a punt several yards backward, resulting in the teams madly scrambling for the pigskin before Gilmer recovered at the Pirate 19. After a 10-yard Pittsburg penalty, Barr flung a 9-yard TD to Pollard with 6:30 left in the third and Olivares nailed another conversion.

After a poor Pirate punt, the Buckeyes had to zing only 35 yards in three plays for their next tally as Barr shipped a 16-yard TD to Jaidon Parrish with 3:08 left in the third.

Barr concluded Gilmer’s next scoring sortie — another 35-yard, 3-play trip — by whizzing 12 yards with 29.3 seconds left in the third and 42-0 advantage.

And the Buckeyes ended the evening with a stupefying surprise as, on the game’s final play, Gilmer defender Charles Williams returned Pittsburg quarterback Garrett Truitt’s fumble 65 yards for a TD. Since time had expired, no PAT was attempted.