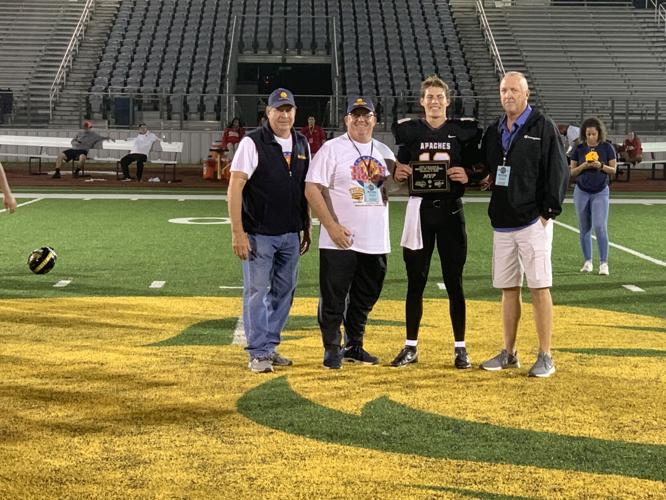 TJC quarterback General Booty (10) accepts the MVP award for his performance in the TIPS-C.H.A.M.P.S. Heart of Texas Bowl on Saturday in Commerce. 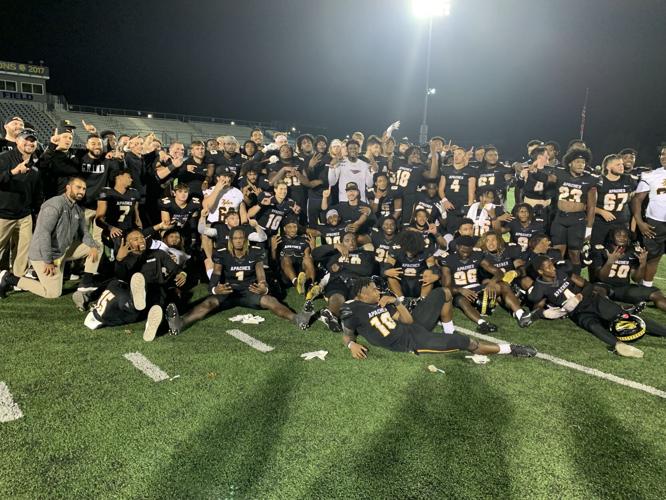 The TJC football team celebrates winning the TIPS-C.H.A.M.P.S. Heart of Texas Bowl on Saturday in Commerce.

TJC quarterback General Booty (10) accepts the MVP award for his performance in the TIPS-C.H.A.M.P.S. Heart of Texas Bowl on Saturday in Commerce.

The TJC football team celebrates winning the TIPS-C.H.A.M.P.S. Heart of Texas Bowl on Saturday in Commerce.

COMMERCE — Quarterback General Booty’s golden arm was on full display and the Apache defense shut down the Kansas visitors vaunted offensive attack as Tyler Junior College concluded the 2021 season with a bowl victory.

Booty tossed two touchdown passes in earning Most Valuable Player honors as No. 15 TJC defeated No. 11 Coffeyville (Kansas) 28-7 in the 19th TIPS-C.H.A.M.P.S. Heart of Texas Bowl on Saturday on Ernest Hawkins Field at Memorial Stadium.

The win moves the Apaches to 7-5 on the season while the Red Ravens, the Kansas Jayhawk Conference regular season champions, fall to 6-3.

Along with the Apache Belles and Band, the whole TJC contingent put on a performance that the Red Ravens and their fans won’t soon forget.

“This was a huge win for the team and Coach (Thomas) Rocco,” said Booty, who connected on 33 of 55 passing attempts for 295 yards. “This was a great team win.”

It was the Apaches first bowl game in eight years and now the team has an 9-9 record in bowl games. TJC also beat Coffeyville in the 1992 Texas Shrine Bowl.

The postseason victory should be a big shot in the arm for Rocco’s program and recruiting.

“We knew we had our hands full with these guys; They can run the ball and throw it deep and they have some huge linemen,” Rocco said. “The defense really stepped up. (Matt) Gordon (defensive coordinator) put together a great gameplan and the guys executed.”

While the offense compiled 390 yards, the Apache defense had one of their best outings in years, holding the Red Ravens to 180 total yards, including 34 yards rushing.

Jaylon Shelton, the former West Rusk star, picked off a pass and led the team in tackles along with Justice Clemons as both have five stops. Shelton also had a tackle for loss.

Gavin Forsha and Darryl Minor had sacks. Minor, the transfer from Texas Tech, had three tackles for losses for minus 15 yards. Others with TFL were Kelekolio Linton, Jacob Humphrey, Torey Phillips and Jacoby Collins.

TJC took a 6-0 lead in the first quarter on field goals of 27 and 40 yards by Matthew O’Brien. However, the Red Ravens took a 7-6 lead at halftime when quarterback Jakson Thomson hit Andrew Schnackenburg with a 12-yard TD pass with 5:39 left in the first half.

“We played well in the first half, but we just could finish,” Rocco said.

The Apaches took the second half kickoff and marched 69 yards in five plays, topped off by Torrance Burgess’ 22-yard TD dash. O’Brien’s PAT made it 13-7 at 12:21.

After series by both teams, TJC punter Shea Yurkunas booted a 45-yard punt to the seven. After a holding penalty backed the Red Ravens up, the ball was centered over the quarterback’s head out of the end zone for safety, thus giving Tyler a 15-7 lead with 4:24 in the third.

“I thought the punt that set up the safety was a huge momentum swing,” Rocco said.

In the latter stages of third quarter, Booty had a 26-yard run to move TJC inside the Coffeyville 40. After a face mask penalty and a two-yard run by Burgess it was time for the fourth quarter.

On the first play if the final period, it was Booty to Cooley (Jeremiah) for a 20-yard TD pass. The extra point attempt was blocked but the Apaches led 21-7 at 14:57.

TJC topped off the scoring when Booty tossed a 20-yard swing pass to Burgess for a touchdown at 10:22. O’Brien’s kick made it 28-7.

Ferontay Cutler led the Red Ravens with 31 yards on four attempts. QB Thomson was 14 of 19 for 103 yards.

Booty, a freshman qualifier, said he plans to return to TJC next season, but for now he wants to enjoy the team win.