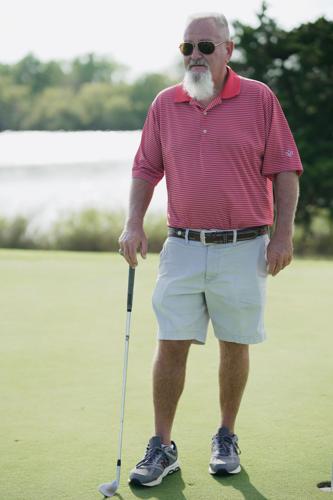 Tyler native Andy Dillard has a new book, “Six In A Row: What The US Open Taught Me about Golf, Faith and Purpose.” 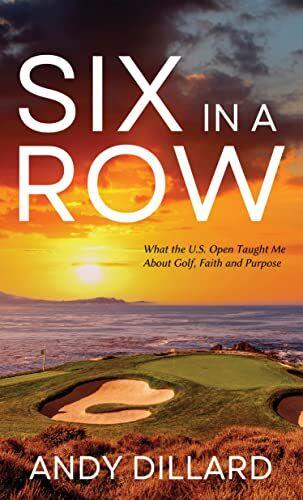 Tyler native Andy Dillard has a new book, “Six In A Row: What The US Open Taught Me about Golf, Faith and Purpose.”

In 1992, I was living in Georgia and traveling the Southeast for a mortgage insurance company. Through a monthly credit card withdrawal, I was a member of several golf courses more than 100 miles from my home in Atlanta. One of those courses was just south of Macon and I pulled into it for nine holes on the way home from Albany or Cordele or Tifton or who knows where.

It was the Thursday of the US Open and I peeked at the television screen as I was checking in at the golf shop. To my surprise, they were showing my old friend Andy Dillard on the tube. Wow, I wonder why they are showing Andy, I pondered aloud.

Excuse me? The first six holes of the US Open? Oh my goodness, little Andy Dillard!

It is hard to believe that week is now 30 years in the rearview mirror but time marches on and now little Andy Dillard is an older guy with grown children and instead of looking like the Michelin man, he now looks more like Billy Gibbons of ZZ Top.

Dillard has a story to tell, the inner workings of a professional golfer trying to salvage a career, live out his dreams and paint his masterpiece at the most beautiful course in the world — Pebble Beach.

Just released this week, Dillard’s book, “Six In A Row,” is a must read for the avid golfer. And the subtitle, “What The US Open Taught Me about Golf, Faith and Purpose,” speaks of his personal transformation from a golf hustler to committed Christian and family man.

The only child of Don and Dixie Dillard, Andy grew up on the east side of Tyler and first noticed his gift for golf at the Putt-Putt on Loop 323 near the Troup Highway. Later he was part of a dynamic junior golf program at the old Briarwood Country Club that was way ahead of its time. Probably a dozen of those junior golfers earned college scholarships in the late 1970s with Dillard, the Texas state junior champion at age 15, earning a full ride to Oklahoma State where he played on a national championship team with guys like Scott Verplank, Bob Tway and Willie Wood.

It was Verplank who planted the seed for Dillard’s comeback in 1992 after playing the tour a couple of years in the late 1980s but losing his “card,” or playing privileges on the all-exempt PGA Tour. Verplank told Dillard during some pre-season training in January of 1992, in Palm Springs, that Andy had the best eye to hand coordination he had ever seen and just to trust in his ability to hit it where you are looking. Sounds simple, and sometimes it can be that way in the strange world of competitive golf.

Dillard’s book, just released in time for the 2022 US Open to be played at The Country Club near Boston, begins with the details of those six birdies in a row, still a US Open record. Paired with fellow Texans Bob Estes and Tom Jenkins, Dillard left his birdie putt hanging on the lip of the cup on the iconic shot par-3 7th hole to break his string that may never be repeated.

“Heck, I thought he was going to birdie every hole,” Jenkins told me later.

Dillard finished that first round with a 68 and in third place to first round leader Gil Morgan’s 66. After a second round 70, Dillard found himself in second place and in the final group with Morgan for Saturday’s third round. The remainder of the story I will leave to Dillard to tell as it is both riveting and revealing of the pressures of golf at the very highest level.

Prior to the US Open of 1992, I happened to be in Memphis for the qualifying that Dillard used to gain entry into our national championship. Also qualifying that day was a college kid from Arizona State named Phil Mickelson. Dillard played in the Memphis Open that same week and then took a charter flight from Tennessee to Pebble Beach, playing cards with friend Tray Tyner and a couple of well known guys — Payne Stewart and John Daly.

Dillard recalling that card game, and other tidbits about famous players like Fred Couples, make his book a rollicking good time to read. Tom Kite would win the 1992 US Open, his only major championship. The winds blew across the Monterey peninsula that Sunday long ago and cameo performances in Dillard’s book include the likes of Jack Nicklaus and ESPN’s Chris Berman. It was Nicklaus who recalled playing with Dillard on tour in the late 1980s, at Doral near Miami.

My personal favorite memory of Dillard, whose dad Don coached my older brother Mike at Hogg Junior High in the early 1960s, was watching him play in the 1987 Shearson Lehman Brothers Andy Williams Open at Torrey Pines near San Diego. I caught up with Dillard on Saturday afternoon when he was finishing and he had me join him for lunch with Seve Ballesteros sitting at the next table. Then, I watched him all day Sunday when he played with Jay Haas and Dillard raced up the leaderboard with an amazing 65 on the South Course that has since hosted two US Opens. All to say, Andy Dillard had some serious game!

The beauty of his book, however, is Dillard’s transparency as he describes the highs and lows of pursuing his dreams as a professional golfer. Not to spoil it for you, I will simply say that there are highs and lows and redemption. And there is transformation.

As Andy says, it is a long and interesting journey from Briarwood to Pebble Beach and the US Open. The same can be said about his personal journey to true happiness and joy.

Buy his book and enjoy the ride.

(Six In A Row is available atandydillard.com)

“The Lord will vindicate me; your love, Lord, endures forever— do not abandon the works of your hands.”