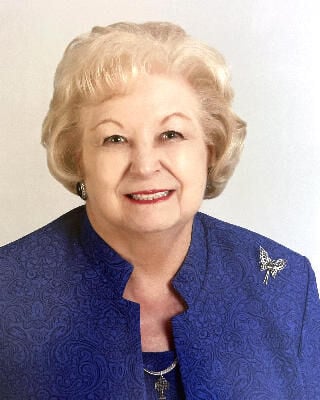 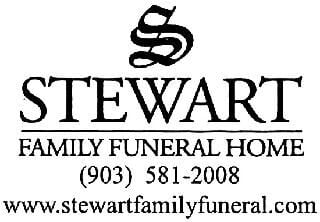 Ruby Ann Menke Baker
TYLER — Memorial services for Ruby Ann Menke Baker, 90, of Tyler will be held on Saturday, July 2, 2022, at 11:00 a.m. at Marvin United Methodist Church under the direction of Stewart Family Funeral Home and the Marvin staff and laity.
Mrs. Baker passed away Thursday, June 23, 2022 in Tyler. She was born February 29, 1932 in Shiner, Texas to Henry Menke and Selma Kupatt Menke. She grew up on a working farm and was the youngest of five siblings: Monroe, Marie, Willert, and Edell Menke.
Ruby was a member of Marvin United Methodist Church in Tyler where she was active in worship, Sunday School and Wednesday Night dinners and Bible Study. Before moving to Tyler after her husband’s death, she was an active member for thirty years at Memorial Drive United Methodist Church of Houston. Along with worship and Sunday School, she participated in United Methodist Women and the Alzheimer’s Ministry.
She graduated from Shiner High School and attended Texas Lutheran College where she was a cheerleader for the Bulldogs. She worked with Shell Oil Company in Houston where she met her husband, Kenneth Baker. Ken and Ruby later lived in Carmichael, California, where Ken worked with Aerojet for the NASA space program. They attended and were active at Winding Way Reformed Church. In 1968 they moved back to Houston. For the first years of her marriage she was a homemaker and loving mother who raised three sons, “The Fabulous Baker Boys”. She later worked for the Spring Branch Independent School District as a librarian assistant at Westchester High School before working as a grade level principal secretary at Spring Woods High School.
Ruby was preceded in death by Kenneth E. Baker, her husband of fifty-six years. She is survived by her loving family including: son, Robert K. Baker, of Houston, his wife Lindy, their children, Travis and Annie Baker, great-granddaughters, Charlotte and Elizabeth; Andrew Baker, and Sarah and Blake Hobson; son, David S. Baker, of Vancouver, WA, and his wife Catherine, and their children, Michael and his wife Lexxi Baker, and Kevin Baker; son, Dr. Douglas M. Baker of Tyler, and his wife Gina, their children, Bryan and his wife Kirsten, and great-grandchildren, McKinley and Callen, and daughter, Rebecca and her husband Trey and great-granddaughter Abigail. She is also survived by several cousins, nieces, and nephews.
If desired, memorials may be made to the Marvin United Methodist Eternal Flame Fund, 300 W. Erwin St., Tyler, TX 75702 (https://marvinumc.com), the Caring Forever Foundation of Memorial Drive UMC, Houston, 12955 Memorial Dr., Houston, TX 77079 (www.mdumc.org) or Hospice of East Texas, 4111 University Blvd., Tyler, TX 75701 (www.hospiceofeasttexas.org).

“For we are God’s handiwork, created in Christ Jesus to do good works, which God prepared in advance for us to do.”