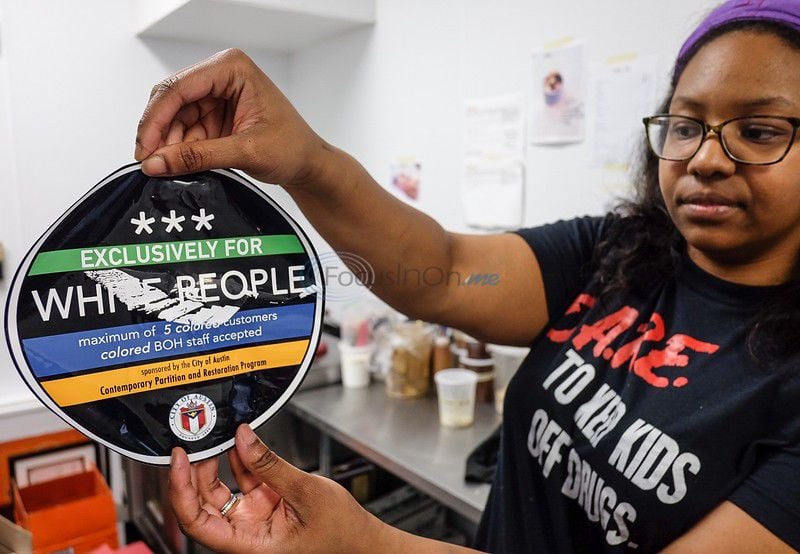 April Jensen, an employee at Sugar Mama's holds a sticker that the business found on the front of their store in Austin, Texas, Wednesday, March 18, 2015. (AP Photo/Austin American-Statesman, Rodolfo Gonzalez) 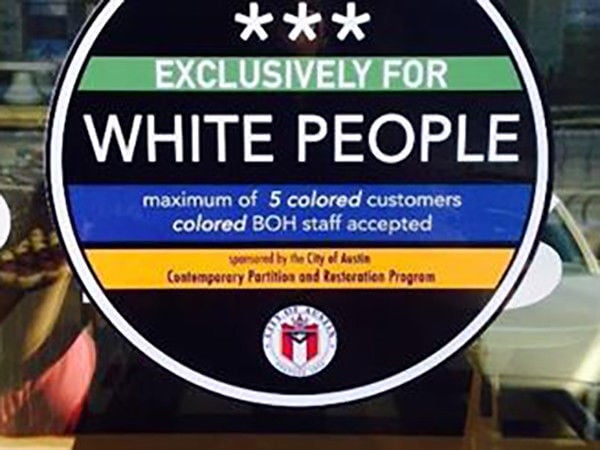 April Jensen, an employee at Sugar Mama's holds a sticker that the business found on the front of their store in Austin, Texas, Wednesday, March 18, 2015. (AP Photo/Austin American-Statesman, Rodolfo Gonzalez)

AUSTIN, Texas (AP) — Employees at several Austin businesses have found stickers saying "exclusively for white people" placed on their windows, sparking an investigation into their origin and condemnation from the mayor.

Mayor Steve Adler said the stickers discovered Wednesday morning were "an appalling and offensive display of ignorance in our city."

The stickers also say "Maximum of 5 colored customers / colored BOH staff accepted," apparently referring to the "back of house" operations at a restaurant. They featured a city of Austin logo and claimed to be "sponsored by the City of Austin Contemporary Partition and Restoration Program," though no such program exists. The city has said the use of its logo was unauthorized.

Several business owners and employees said the stickers unnerved them.

April Jensen, who works at the Sugar Mama's Bakeshop, told the Austin American-Statesman "it kind of hurt" when she read the sticker.

"I don't really understand the message behind it," said Jensen, who is African-American. "All types of customers come in here."

Bryce Bencivengo, spokesman for the city of Austin, tells the San Antonio Express-News that city officials along with the Austin police are investigating the stickers' origin.

Raul Alvarez, board president for the East Austin Conservancy, said the stickers are likely in response to gentrification in the area on Austin's east side.

"I certainly share the concerns about the history and culture and affordability that's being lost because of the rapid development, but our organization tends to focus on what it is we can do to preserve what makes East Austin unique and not focus on strategies that divide the community," he told the Austin American-Statesman.

"Don't put signs like that on people's doors because you want to bring attention to your plight," he said.

Copyright 2015 The Associated Press. All rights reserved. This material may not be published, broadcast, rewritten or redistributed.