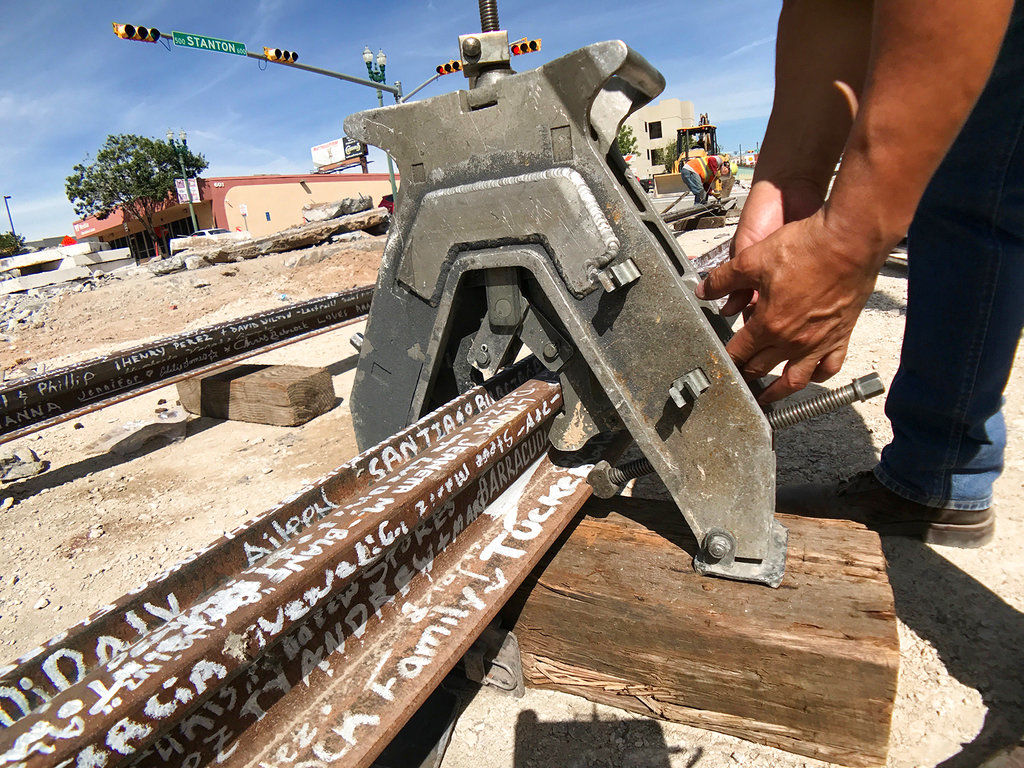 In an August 2015 photo, Curtis Boggess, a welder for Paso del Norte Trackworks, rechecks the alignment of the last portion of rail and prepares it for the 404th thermite weld, which signaled the completion and end of the rail work phase for the El Paso Streetcar Project in El Paso, Texas. Much work continues behind the scenes; but by the end 2018 the streetcars will once again carry passengers along the streets of Downtown and West Central El Paso. (Rudy Gutierrez/The El Paso Times via AP) 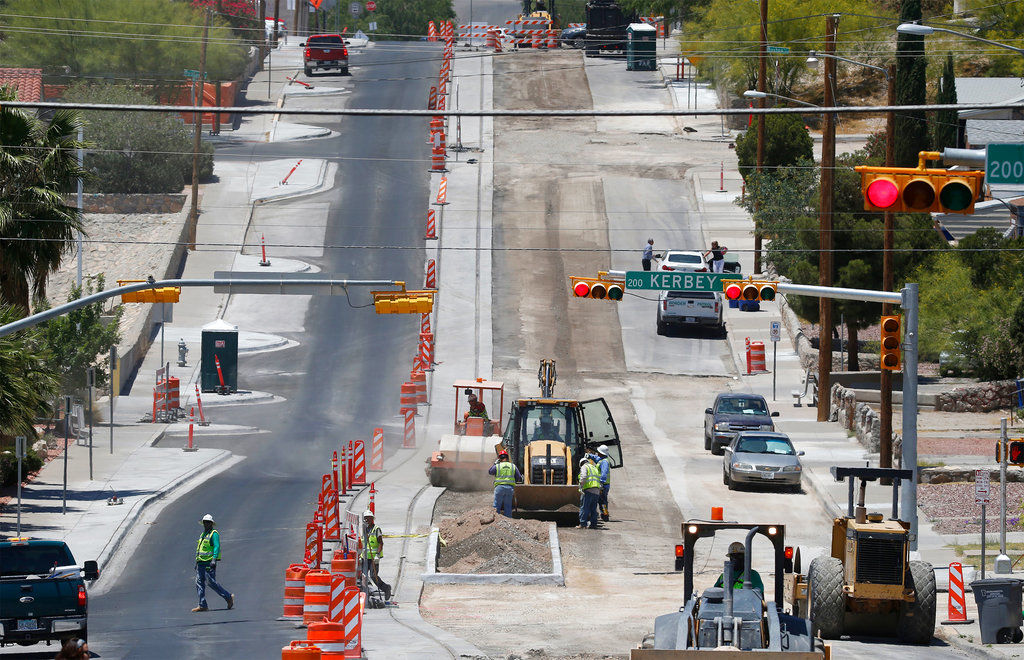 An overview of the El Paso Streetcar Projest is shown Thursday, March 15, 2018. The streetcar will run northbound in the center lane of Stanton Street. Crews are presently working on boarding stations which will be located immediately adjacent to the track between a single northbound traffic lane and a single southbound traffic lane. The boarding locations will be outfitted with railings and benches and will be accessed via crosswalks at intersections. It's also important to recognize that the character of Stanton Street will be dramatically different when it re-opens to north-south traffic in the coming weeks. Rather than accommodating two lanes in each directions, Stanton will be a much more complete street - including a single northbound lane, a single southbound lane, a center streetcar lane, and a bike facility. (Ruben R. Ramirez/The El Paso Times via AP) 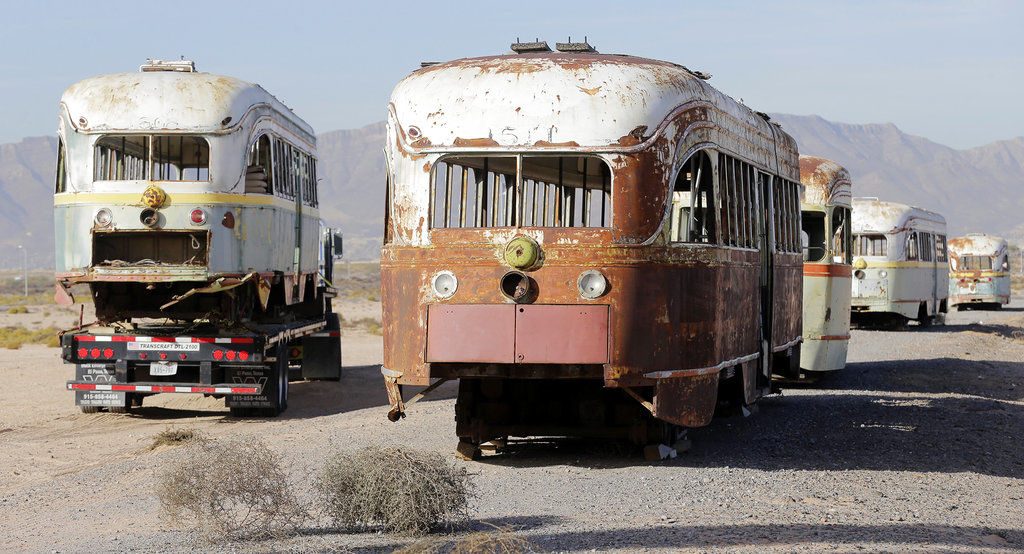 In a Dec. 9, 2015 photo, crews from Alliance Riggers and Contractors begin the process of loading and moving the last six street cars to Sun Metro Headquarters before shipping them out. Three of the remaining street carss will be shipped to Pennsylvania, to the Brookville Equipment Corp. in Brookville, Pa. to join the three presently there now. After they are refurbished a total of six of the nine remaining street cars will be used when the service returns.(Ruben R. Ramirez/The El Paso Times via AP) 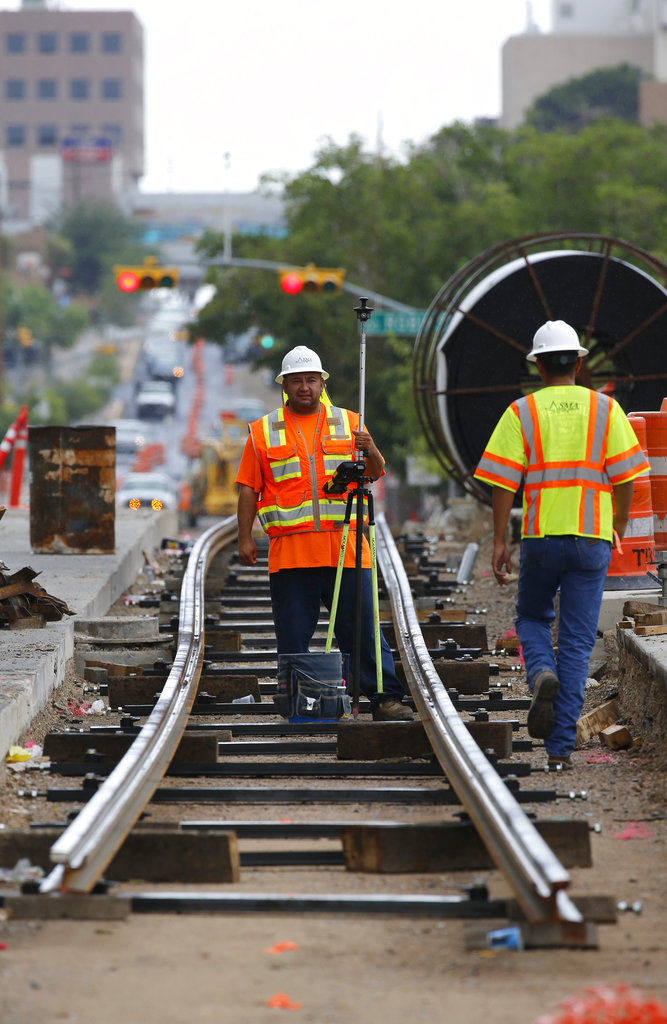 In a June 28, 2016 photo, crews work on boarding stations, which will be located immediately adjacent to the track between a single northbound traffic lane and a single southbound traffic lane. The streetcar will run northbound in the center lane of Stanton Street. The character of Stanton Street will be dramatically different when it re-opens to north-south traffic. Rather than accommodating two lanes in each directions, Stanton will be a much more complete street - including a single northbound lane, a single southbound lane, a center streetcar lane, and a bike facility. Studies have shown that decreasing the width of a street also decreases the speed at which motorists travel, making the street safer for other users including pedestrians, cyclists, and those who are accessing transit. (Ruben R. Ramirez/The El Paso Times via AP)

EL PASO, Texas (AP) — Nearly 5 miles of rail have been laid, and the overhead cable system is nearly done.

The El Paso Times reports it's been about 15 months since work on the $97 million El Paso streetcar project began, and it is now about 95 percent complete.

The maintenance facility stands ready to receive the vintage cars that are getting scraped, buffed and painted — and receiving a technological boost — before they start making their way back to El Paso this spring.

Much work continues behind the scenes, but by the end of the year the streetcars will once again carry passengers along the streets of Downtown and West Central El Paso.

For now, expert streetcar restorers at Brookville Equipment Corp. in Pennsylvania continue to refurbish six of the original vintage President's Conference Committee streetcars that rolled along El Paso streets until 1974 and then sat rusting in the open desert on El Paso International Airport property for 40 years.

The first streetcar is expected to arrive this month and the others will follow, said Raymond Telles, executive director of the Camino Real Regional Mobility Authority, which is overseeing the construction.

"Part of the testing is still ongoing," Telles said.

Telles said the company is making sure car No. 1506, the first car it fully restores, has all the kinks worked out before it is delivered. The other five cars are in different stages of the restoration process.

For Minerva Santos, the nostalgia is palpable.

"There was a lot of skepticism about these in the beginning, and maybe there still is," said Santos, 42, a banker who works Downtown. "But now that you see the rails and the lines and the pictures, it's like the sentiment has changed. There's an excitement building. I hope it's a success."

While the streetcars are getting a makeover, minor construction along the route might continue as safety inspections and the transfer of ownership to the city takes place.

The Texas Department of Transportation is conducting the safety inspections on behalf of the Federal Transportation Administration and might make recommendations so the streetcar system can receive its safety certification.

Two streetcars are needed to conduct a complete test of the system along the 4.8-mile route. Telles said this is referred to as a "full load" test that will establish whether the overhead cable system functions properly.

If TxDOT finds safety issues with the maintenance facility or the infrastructure, which includes the tracks and overhead cable system, the CRRMA will have to make the necessary adjustments.

Officials anticipate that the safety certification will be issued in August or September.

Those tests also must be conducted before the CRRMA can hand over the ownership to the city.

Once the project is completed, the streetcar system will be operated by Sun Metro, the city's mass transit department, which is funded primarily through federal funds, sales taxes and rider fares.

Sun Metro Director Jay Banasiak said the city has been gearing up to take over operations, starting with preparing its standard operating procedures and hiring an assistant director of streetcar operations, a safety manager and a maintenance manager.

Next will come hiring the first group of streetcar operators, which likely will happen in the summer, he said.

Sun Metro staff also will have to conduct test runs of the routes to find out how long they take to complete and how many stops they will need to make, for example.

"We won't be able to figure it out until we can actually test," Banasiak said.

The city anticipates it will cost about $2.5 million a year to operate the system.

Banasiak said Sun Metro will use about four funding sources to cover the cost, although the estimates are preliminary.

The fare box revenues, which are revenues from riding fees, are expected to bring in about $400,000 in the first year.

Banasiak said that translates to about 600,000 riders in the first year based on comparisons to other cities like Tampa, Florida; Memphis, Tennessee; and Little Rock, Arkansas, which all have streetcar systems and are similar in population size to El Paso.

The streetcar also will replace one of two Downtown bus routes, which will shift about $460,000 for operating costs.

The city also will receive as much as $2 million from a federal Congestion Mitigation and Air Quality Improvement program grant over the next two years, Banasiak said.

"The rest will be made up with sales tax," Banasiak said. "We will live within those means."

Those hours and schedule may change, however, depending on ridership once the service begins.

Construction of the streetcar infrastructure remains on time and on budget despite change orders to the work that officials say have been mostly routine.

Since construction started in January 2017, there have been about 70 work change requests, about 30 of which have been approved.

Telles said the approved change orders add up to about $9.2 million, although the cost has been absorbed by the contingency fund built into the $97 million project.

Some of the change orders were for work such as moving the tracks on Stanton Street to the center of the roadway, adding two-way bike lanes, the installation of sewer lines, storm drainage and the removal of concrete foundation discovered during construction.

Telles said it is not uncommon for change orders or requests to be submitted for a project of this size.

"We are anticipating one final wrap-up change order," Telles said.