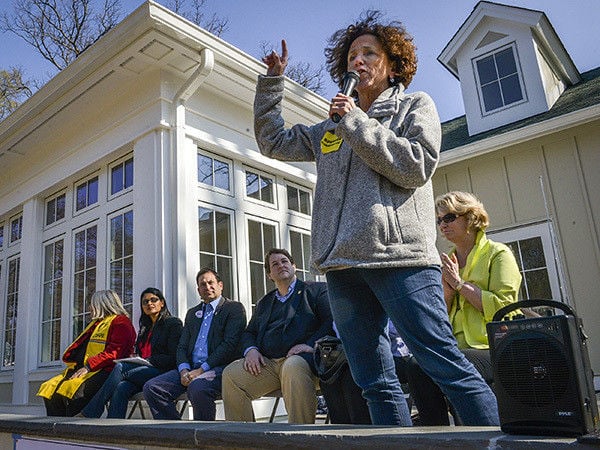 Natalie Roy talks at a rally at nearby Lyon Park, where opponents gathered. (Washington Post photo by Bill O'Leary) 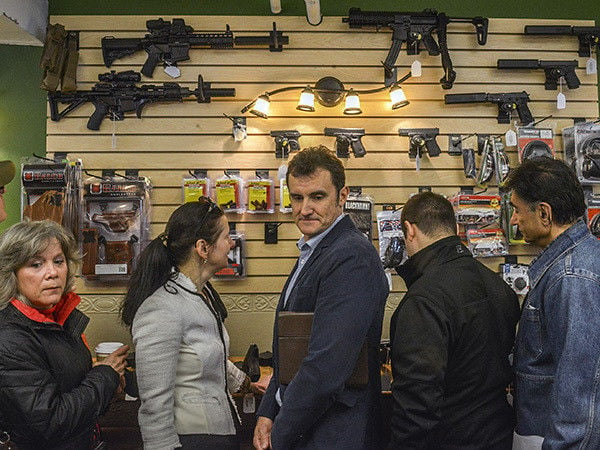 Customers browse the guns and accessories at Nova Armory, which opened Saturday in Arlington, Virginia. Two neighborhood associations have voiced opposition to the shop. (Washington Post photo by Bill O'Leary)

Natalie Roy talks at a rally at nearby Lyon Park, where opponents gathered. (Washington Post photo by Bill O'Leary)

Customers browse the guns and accessories at Nova Armory, which opened Saturday in Arlington, Virginia. Two neighborhood associations have voiced opposition to the shop. (Washington Post photo by Bill O'Leary)

Opening in liberal Arlington "was a struggle," Dennis Pratte, one of the owners, said after the ribbon-cutting. "There was a time when we were getting so much press that we thought about doing something different or relocating." But he said supporters from around the country urged him to go forward and promised to support the business.

"This is my neighborhood, and I'm really excited to have a gun shop here," said Lee Schalk, a millennial-aged gun owner. "It makes the neighborhood a more well-rounded place."

Suzie Cook, a middle-aged Fairfax County resident browsing the shotguns with her partner, said opponents were "reactionary, as opposed to learning the value of guns in proper hands and used properly."

A group rallying at Lyon Park would probably disagree. Since learning a month ago that the county approved an occupancy permit for the store, they have been trying to stop it. Their options are few in gun-friendly Virginia: The state prohibits localities from regulating firearms dealers, and Nova Armory has all its permits in order. But that doesn't mean opponents are giving up.

"Like most of the people here, I don't think it fits in with the character of the neighborhood," said Julia Young, who attended the rally with her husband and child. She noted that the shop is across the street from a day-care facility and that both Lyon Park and Ashton Heights neighborhood associations overwhelmingly voted to oppose the gun store's opening. She and others noted that Pratte backed out of a meeting with the Lyon Park Citizens Association and has declined to identify the principal owner. "Any [store] owner intent on provoking and antagonizing the neighborhood, as he has, would be undesirable," Young said.

The neighborhood group decided not to stage a protest at the store because "we don't want to have a confrontation," said Natalie Roy, one of the Lyon Park group's organizers. "Why give the gun-store owner any unnecessary publicity, which is what he's after."

Numerous elected officials, including four state legislators, four of five Arlington County Board members, the county manager and a school board member attended the Lyon Park rally, calling on residents to not give up the fight. State Sen. Barbara A. Favola, D-Arlington, described her unsuccessful attempt to pass a bill that would give local communities control of gun stores. Del. Alfonso H. Lopez, D-Arlington, decried the General Assembly's unwillingness to ban any weapons, even flamethrowers. Del. Mark Levine, D-Alexandria, urged residents to "picket, protest and apply peer pressure."

County Board member Christian Dorsey (D), who brought his daughter to the rally, said the county will apply "certainly a level of vigilance - not special scrutiny, but we're going to be watching closely to be sure [the store] operates as it's supposed to."

Arlington residents can buy guns at a pawnshop on Lee Highway or head out to Fairfax County, where numerous stores, including some formerly owned by Pratte, operate. But some have been hostile to stand-alone shops; last year, residents in the Cherrydale neighborhood persuaded the landlord to revoke a lease to a McLean business, Nova Firearms, that wanted to relocate there.

Last week, another low-level confrontation took place when the store's landlord towed another tenant's van that was adorned with articles about gun violence.

Karen Taylor Soiles, a physical therapist who works above the gun store, said landlord Katya Varley had her vehicle towed and refused to pay the $95 towing fee. Varley declined to talk Saturday to a reporter.

Andrew Belovarac, who lives less than a mile from the store, pre-ordered an AK-47 and came Saturday to fill out paperwork that would allow him to take it home.

"It's very convenient," he said of the location in a small commercial strip along North Pershing Drive, one block off Route 50. "I don't understand why people [oppose the location]. It's legal. Gun owners are probably some of the safest and most responsible citizens out there."

Patricia Sullivan covers government, politics and other regional issues in Arlington County and Alexandria. She worked in Illinois, Florida, Montana and California before joining the Post in November 2001.