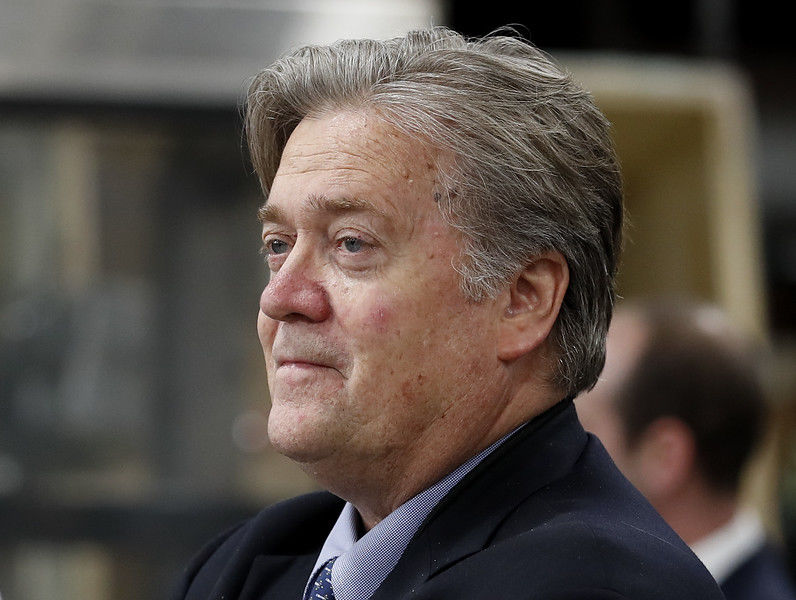 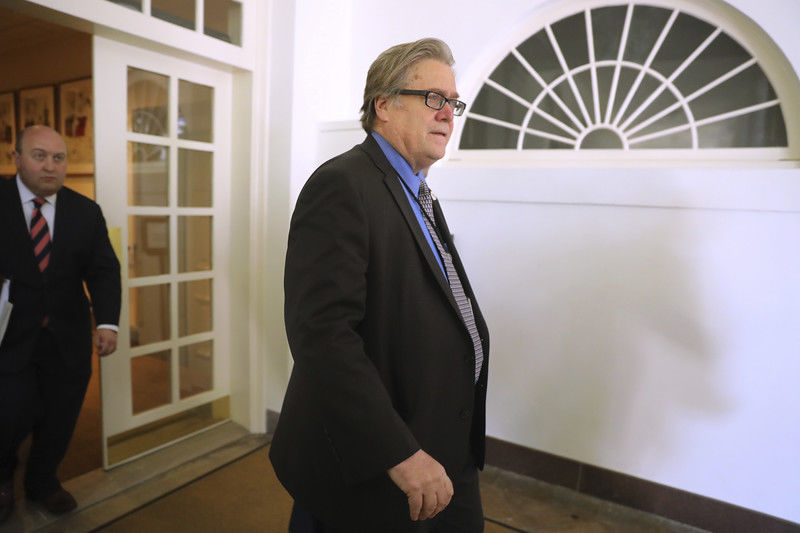 (AP) In this photo taken June 1, 2017, Steve Bannon is seen at the White House in Washington. According to a source, Bannon is leaving White House post. (AP Photo/Andrew Harnik)

(AP) In this photo taken June 1, 2017, Steve Bannon is seen at the White House in Washington. According to a source, Bannon is leaving White House post. (AP Photo/Andrew Harnik)

WASHINGTON - Steve Bannon, the blunt-spoken and divisive strategist who rose from Donald Trump’s conservative campaign to a top White House post, was pushed out by the president Friday, capping a turbulent seven months marked by the departure of much of Trump’s original senior staff.

A favorite in the farther-right portions of the Republican Party, Bannon had pressed Trump to follow through on some of his most contentious campaign promises, including his travel ban for some foreigners and his decision to pull out of the Paris climate change agreement. He returned as executive chairman to Breitbart News, which he led before joining Trump’s campaign, and presided at its Friday evening editorial meeting, the news site announced.

Trump now has forced out his hard-line national security adviser, his chief of staff, his press secretary (whose last day will be Aug. 31) and two communications directors - in addition to the FBI director he inherited from President Barack Obama.

Bannon’s departure is especially significant since he was viewed by many as Trump’s connection to his base of most-committed voters and the protector of the disruptive, conservative agenda that propelled the celebrity businessman to the White House.

“It’s a tough pill to swallow if Steve is gone because you have a Republican West Wing that’s filled with generals and Democrats,” former campaign strategist Sam Nunberg said shortly before the news of Bannon’s departure broke. “It would feel like the twilight zone.”

From Breitbart, there was a dramatic one-word warning.

“#WAR,” tweeted Joel B. Pollak, a senior editor at large at the news site.

Indeed, Bannon’s nationalistic, outsider conservatism served as a guiding force for Trump’s rise to office. He injected a dark populism into the campaign and sharpened its attacks on Democrat Hillary Clinton, encouraging Trump’s instinct to fight and counter-punch at every turn. When the release of a 2005 tape, in which Trump can be heard boasting about groping women, threatened to capsize the Republican’s campaign, Bannon attempted to turn the tables by gathering a group of women who had accused Bill Clinton of sexual assault and trying to ambush the Democratic nominee at a general election debate.

Without him, Trump’s agenda is left in the hands of more moderate advisers, including his son-in-law, his oldest daughter and his economic adviser, whom Bannon has slammed as “globalist.”

But Bannon was also accused by many of his critics of leaking to reporters in a bid for self-promotion, and egging on Trump’s most damaging impulses.

Trump spokeswoman Sarah Huckabee Sanders said Bannon and chief of staff John Kelly, only recently installed himself, had agreed that Friday would be Bannon’s last day.

“We are grateful for his service and wish him the best,” she said in the only statement from the White House.

A combative and unorthodox Republican, Bannon was a contentious presence in a White House divided by warring staff loyalties. He repeatedly clashed with other top advisers, most notably Trump’s son-in-law, Jared Kushner. His puppet-master image also drew the ire of the president, who at times bristled at the perception that Bannon was the mastermind of his winning campaign and the force behind White House policies.

One person close to Bannon said he had offered his resignation to Trump on Aug. 7. It was to go into effect a week later, the one-year anniversary of when he officially joined Trump’s presidential campaign. But the departure was delayed after the violence in Charlottesville, Virginia, said the person, who spoke only on condition of anonymity to discuss private conversations.

In fact, Bannon had been on shaky ground for weeks, and his job appeared in jeopardy when Kelly announced that he’d be embarking on a personnel review of West Wing staff.

Though Bannon had adopted a lower profile in recent weeks, he again became a flashpoint following criticism from the right of national security adviser H.R. McMaster, which some blamed on him, and Trump’s refusal to blame white nationalists for the violence in Charlottesville.

Earlier this week, The American Prospect posted an interview in which Bannon contradicted Trump by saying there was no military solution to the threat posed by North Korea and its nuclear ambitions. Just last week, Trump pledged to answer North Korean aggression with “fire and fury.”

Bannon also talked about purging his rivals from the Defense and State departments, as though he were in charge.

In recent remarks, the president downplayed Bannon’s role in his campaign and passed up an opportunity to express confidence in him publicly.

“He’s a good person. He actually gets very unfair press in that regard,” Trump said earlier this week. “But we’ll see what happens with Mr. Bannon.”

Trump had recently signaled to confidants that he was going to dismiss Bannon but had not settled on a timeframe, according to another person who had discussed the matter with the president but was not authorized to speak publicly about private discussions and insisted on anonymity. Still, Bannon had been telling people as recently as this week that he believed his job was safe and he would leave only if fired.

Several sources said Bannon had been hinting for weeks that he might soon return to the helm of Breitbart News. At one point he casually discussed the matter as though it was a certainty, according to a Bannon associate who demanded anonymity to share private conversations.

Bannon told Bloomberg politics in an interview that he would continue to fight the same fights, just from outside the White House.

“If there’s any confusion out there, let me clear it up: I’m leaving the White House and going to war for Trump against his opponents - on Capitol Hill, in the media, and in corporate America,” Bannon told the outlet.

Still, Bannon told allies he intended to hold the administration accountable if it falters on campaign promises.

“For the word of God is alive and active. Sharper than any double-edged sword, it penetrates even to dividing soul and spirit, joints and marrow ...” (Hebrews 4:12)