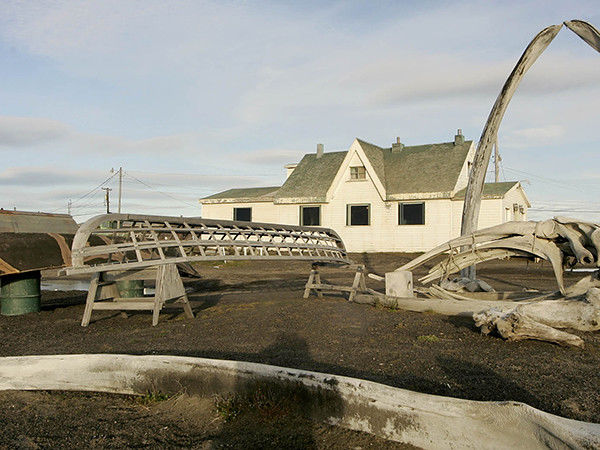 A skin boat display sits next to whale bones and an arch made of a whale jaw on the beach at Brower's Cafe in Barrow, Alaska in 2005. (AP Photo/Al Grillo, File) 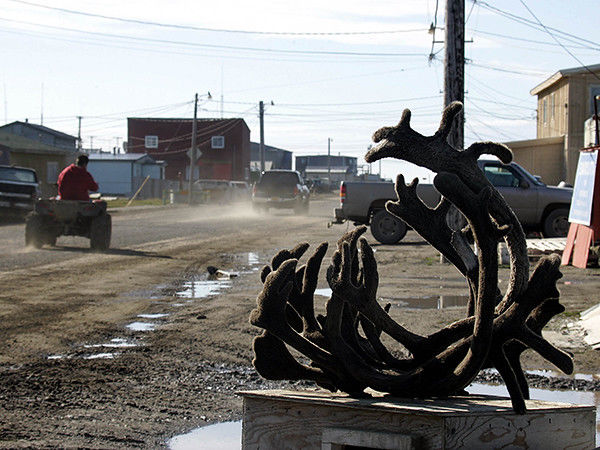 An ATV dreives past caribou antlers on one of the dirt roads in Barrow, Alaska in 2005. (AP Photo/Al Grillo, File) 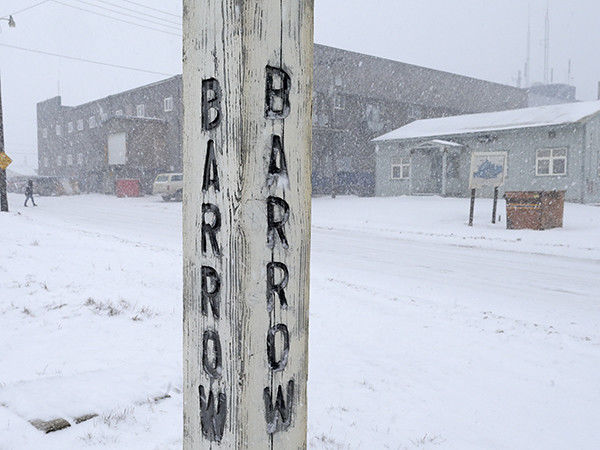 Residents in Barrow, the nation's northernmost community, have voted to change the name of their city back to its traditional Inupiaq name of Utqiagvik. (AP Photo/Gregory Bull, File)

A skin boat display sits next to whale bones and an arch made of a whale jaw on the beach at Brower's Cafe in Barrow, Alaska in 2005. (AP Photo/Al Grillo, File)

An ATV dreives past caribou antlers on one of the dirt roads in Barrow, Alaska in 2005. (AP Photo/Al Grillo, File)

Residents in Barrow, the nation's northernmost community, have voted to change the name of their city back to its traditional Inupiaq name of Utqiagvik. (AP Photo/Gregory Bull, File)

ANCHORAGE, Alaska (AP) - Residents in the nation's northernmost community have voted to change the name of the Alaska town to its traditional Inupiat Eskimo name.

A slight majority of voters in the largely Inupiat city of Barrow approved efforts to change the community's name to Utqiagvik (oot-GHAR-vik) in their local election Oct. 4. The vote was tight, with 381 in favor of the name change and 375 against it.

"Basically, it reinforces the cultural identity of the people," said Mayor Bob Harcharek, who is not Native. He noted that early day missionaries set up schools in the area where students were forbidden to speak in their native language and were punished if they did so. "It caused some social psychological problems."

Barrow City Council member Qaiyaan Harcharek, the mayor's son, introduced a local ordinance in August that began the process ratified by voters. The younger Harcharek is Inupiat on his mother's side.

"We are now in an era where the reclamation of tradition is critical to the perpetuation of identity as Iñupiat," he wrote in an email Friday to The Associated Press. "The people of Utqiagvik voted to regain our traditional name. Hopefully, it signifies the beginning of a decolonizing revolution. Regaining our traditional names is just one step towards that healing!"

Another Alaska community in recent years to change its name is the western Alaska village now known as Numan Iqua, which was known as Sheldon Point until voters approved the new name in 1999.

There's also an ongoing effort to rename Devils Tower National Monument, a giant rock butte in northeast Wyoming. Local American Indians and others are seeking to have it switched to Bear Lodge.

Among those unhappy with the Barrow change is William Phillips, a non-Native local married to an Inupiat woman. Phillips, who voted against the change, owns the Barrow Souvenirs and Gifts shop and is a 22-year resident of the town located more than 700 miles north of Anchorage.

"I think it's stupid," he said Friday. "I don't understand how it got passed."

He hasn't decided if he'll change the shop's name as well.

Philips believes the name change will come with enormous cost to the city to make a slew of changes reflecting the new name. It also will be a huge inconvenience to residents who will now have to change passports, drivers' licenses and other documents.

Phillips said he understands why people voted in favor of the change, but he doesn't believe everyone knew exactly what the practical impact will be.

"Most of the yes votes probably were proud Native people who think they're going to revitalize their culture," he said. "And in fact there's other ways to do that instead of putting all the expenditures right back in the community that we can't afford already."

The city is following state code to implement the change in the Arctic Ocean coastal town of nearly 5,000. Bob Harcharek said a notification was mailed as required to the lieutenant governor's office this week, noting the name change becomes official 45 days after notification.

Claire Richardson, spokeswoman for Lt. Gov. Byron Mallott, said the paperwork has not yet been received.

The town was named in 1826 for Sir John Barrow, 2nd Secretary of the British Admiralty, according to the state's community database and other sources.

It's not immediately clear what the city's new Inupiat name means.

Some say it means "a place where snow owls are hunted" while others say it essentially means a place for gathering potatoes, even though potatoes are not native to the area.

With the name change, the town also is seeking state approval to change it stop signs to the Inupiat word: "Nutqagin," the mayor said. If necessary, the English word "Stop" also will be added, but it will be much smaller than the Native word on the red octagonal sign.

“I will give thanks to the LORD because of his righteousness; I will sing the praises of the name of the LORD Most High.” (Psalm 7:17)