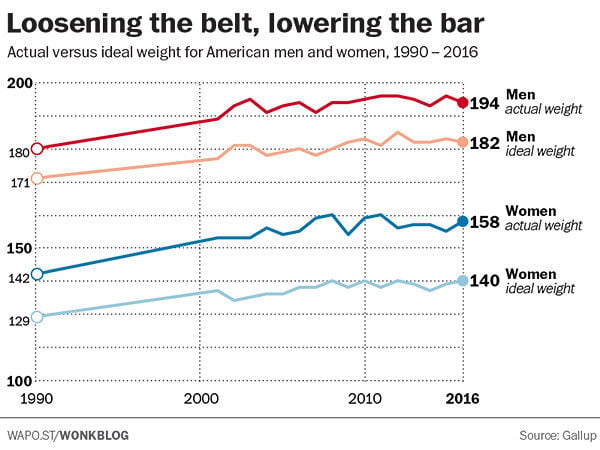 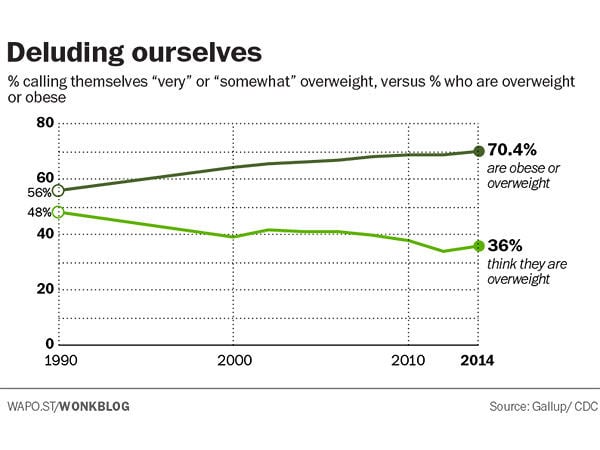 As you prepare to pack on your holiday pounds this winter, consider this: The Centers for Disease Control and Prevention say more Americans than ever are overweight. But according to some new Gallup data, far fewer of us actually think we're overweight.

In recent years, the gap between how fat we think we are and how fat we are is wider than it's ever been.

"What seems to be happening is a resetting of norms" about weight, said Yale University's Nicholas Christakis, a physician and sociologist who has written extensively on how our social context influences our biological behavior (like eating).

"As a person's social contacts gain weight, it seems to change the person's idea about what an acceptable body size is," Christakis says. "This may result in the person him/herself gaining weight, or, even if it does not, it makes the person more accepting of other people's weight gain."

You can see this latter effect in action in an accompanying chart, plotting the differences between men and women's average self-reported actual and ideal weights since 1990.

In 1990, for instance, the typical American man weighed 180 pounds and said his ideal weight was about 171. Today that man has gained 14 pounds, and his ideal weight has moved up with it. The typical man now says he'd like to weight about as much as the average man in 1990 actually did weigh.

You see a similar effect happening among women, although in that case the gap between actual and ideal weight is even wider - close to 20 pounds in 2016.

If you look back at the chart "Deluding ourselves," you see that the percent of overweight or obese Americans has essentially increased in linear fashion since 1990. That train shows no sign of stopping - is there any way to turn it around?

In a more recent paper, Christakis and colleagues tried to game out what the future of American weight gain might look like using a mathematical model based on the past 40 years or so of weight trends. That model suggested that the obesity rate might not plateau until it hits about 42 percent of the population (currently, about 38 percent of us qualify as obese).

If that's the case, then Americans are going to keep getting heavier until about the year 2050.

State and federal policymakers have tried to tackle the obesity epidemic with limited success, to say the least. Perhaps the most well-known recent program is Michelle Obama's Let's Move! initiative aimed at ending childhood obesity.

But taken together, the Gallup and CDC data suggest a different mechanism at work: Anti-obesity efforts might not be working because roughly half of overweight people don't actually realize they're overweight.

Christopher Ingraham writes about politics, drug policy and all things data. He previously worked at the Brookings Institution and the Pew Research Center.